OPINION: Immigrants Are a Fiscal Boon for U.S., Not a Burden 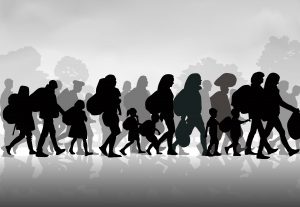 Immigration restrictionists give a number of reasons why they want fewer people settling in the U.S. Most of these reasons don’t hold up under scrutiny. For example, the best available data says that immigrants don’t take native-born Americans’ jobs, or drive down their wages; indeed, it’s more likely that skilled immigrants boost the earnings of the native-born. In the U.S. and in Canada, immigration tends to reduce crime. And both history and data show that in the U.S., immigrants assimilate successfully into the local culture and social fabric.

But there is one anti-immigration argument that sometimes does have merit: In countries with strong welfare states, immigrants can impose a large fiscal burden on the government. Governments in advanced countries tend to levy heavy taxes on the rich, and use these to pay for services for the poor, the old and the sick. If immigrants are disproportionately poor, old and sick, they will increase the tax burden, which could hurt the economy. That in turn could lead governments to cut welfare benefits, making life harder for the native-born who need help.

This is a real problem. But how severe of a problem is it in reality? It’s crucial to look at evidence to determine whether immigrants really are a fiscal burden.

Unfortunately, many restrictionists don’t want to take this approach. Recently, the Department of Health and Human Services put out a report supposedly showing that refugees – one very small subset of immigrants – pay more in taxes than they receive in benefits. President Trump’s adviser Stephen Miller, an ardent supporter of immigration restrictions, then reportedly attempted to censor the report, removing all mention of refugees’ tax contributions. This suggests that many restrictionists are relying on their anti-immigrant convictions instead of hard evidence.

But outside the tightly controlled world of the executive branch, economists are on the job. A recent paper by William Evans and Daniel Fitzgerald also looked at the fiscal impact of refugees. The authors’ data allowed them to build a statistical picture of refugees’ income and educational attainment over a 20-year period after arriving. That, plus knowledge of how much the government spends on refugees, allowed them to construct a model of how much these immigrants paid in taxes and received in government benefits.

During their first 20 years of life as working-age Americans, Evans and Fitzgerald found, refugees contributed about $21,000 more to the system than they took out. At first, refugees are a fiscal drain, since the government spends money to help them relocate and get started in the U.S., and because at first many refugees have trouble finding a job. But refugees steadily learned how to make it in the new land – six years after arriving, they hade higher employment rates than the average native-born American. They then mostly got off welfare and became taxpayers for many years.

Evans and Fitzgerald’s analysis is incomplete because it has difficulty tracking refugees after age about 65. When refugees stop working and start collecting Social Security and Medicare, their net fiscal contribution inevitably goes negative, just as it does for native-born Americans. Those benefits are likely to exceed the amount that refugees pay in during their working years, which by Evans and Fitzgerald’s estimate is only around $1,000 per year. So refugees probably are a net drain on the U.S.’s fiscal resources over their lifetimes. But because refugees work a lot, the drain isn’t as big as many worry.

Now it’s important to remember that refugees are only a very small fraction of the people who move to the U.S. What about the fiscal impact of immigrants as a whole? Here there is a wealth of evidence. For example, a 2016 National Academy of Sciences report examines this question thoroughly.

The NAS finds that low-skilled immigrants – that is, immigrants with no high-school degree – tend to cause a modest net fiscal drain at the state and local level. This isn’t because immigrants go on welfare, but because they tend to have a lot of kids, which the government then pays to educate. However, the children of immigrants – the second generation – tend to do very well economically, with high employment rates and good wages. This makes them net fiscal contributors.

It’s important to remember that immigration to the U.S. has become much more high-skilled, on average, in the last decade. This is largely due to the end of net illegal immigration into the country. That means that although immigrants might have been costing the government money back in the 2000s, they now are helping to fill public coffers. Refugees are still costing the taxpayer, but this is insignificant compared to the broader, positive effect of the high-skilled legal immigration that now comprises the bulk of the inflow into the U.S.

In other words, immigrants are paying for the retirements, the health care and the welfare benefits of the native-born. Restricting immigration, as Miller and others want to do, would either increase the tax burden on native-born Americans, or cause benefits to be cut – probably for the elderly. That hardly sounds like a good way to put America first.