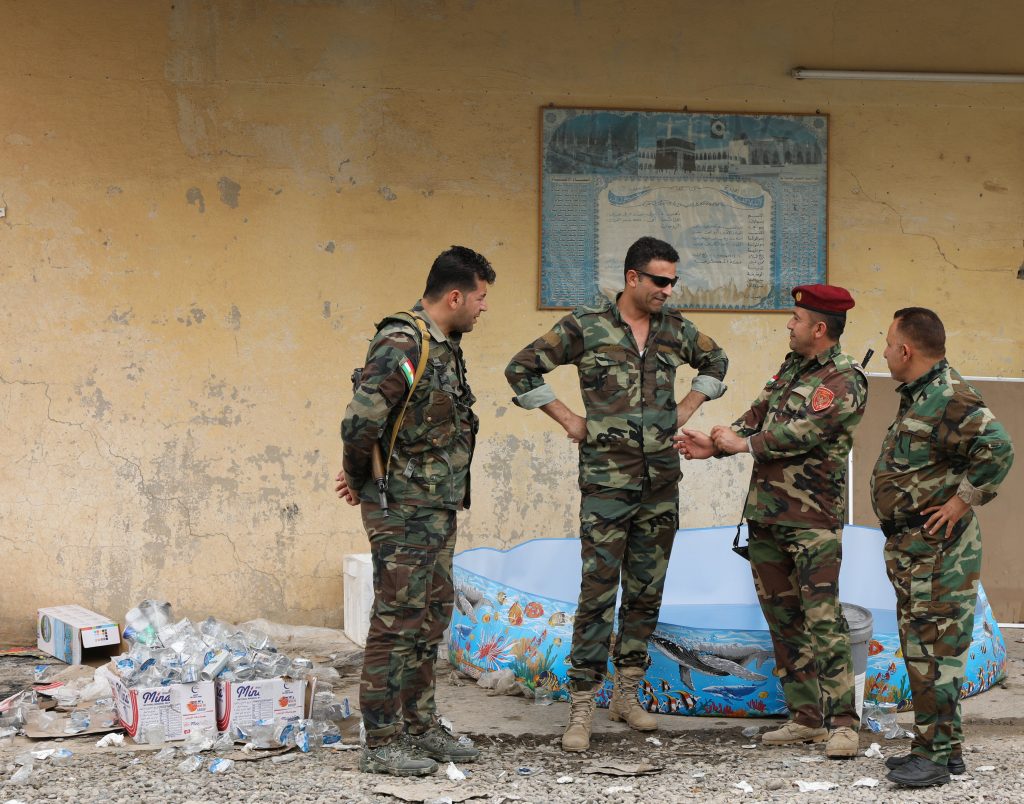 Iraqi Kurds cast ballots on Monday in their autonomous region and in a wide sweep of captured territories on whether to seek independence from Baghdad, a historic vote that has also raised tensions and fears of instability.

The referendum is non-binding and will not immediately bring independence, but it would mark a definitive stance by the Kurds to break away, and Kurdish leaders say they will use a “yes” vote to press for negotiations with Iraq’s central government to win statehood.

From Ankara, Turkish President Recep Tayyip Erdogan threatened military intervention in Iraq in response to the vote, stressing that Kurdish independence was unacceptable to his country and that this was a “matter of survival.”

The Iraqi Kurdish push for independence has been made even more combustible because Kurdish forces captured extensive territories in fighting with the Islamic State terror group in the past year. Those territories run from northwest Iraq across the country to the Iranian border on the east — including the oil-rich city of Kirkuk. Baghdad claims those territories, but the Kurds say they are part of their zone and residents there are participating in Monday’s vote.

More than 3 million people are expected to vote across the three provinces that officially make up the Iraqi Kurdish autonomous region and in the disputed territories, according to the Independent High Elections and Referendum Commission, the body overseeing the vote.

Lines began forming early in the day at polling stations across Irbil, the Kurdish regional capital.

The referendum is being carried out despite mounting opposition from Baghdad and the international community.

The United States, a key ally of Iraq’s Kurds, has warned the vote will likely destabilize the region amid the fight against IS. The Iraqi central government has also come out strongly against the referendum, demanding on Sunday that all airports and borders crossings in the Kurdish region be handed back to federal government control.

In an address from Baghdad on Sunday night, Iraqi Prime Minister Haider al-Abadi said that “the referendum is unconstitutional. It threatens Iraq, peaceful coexistence among Iraqis and is a danger to the region.”

“We will take measures to safeguard the nation’s unity and protect all Iraqis,” he added.

Turkey said on Monday that it doesn’t recognize the referendum and declared its results would be “null and void.”

Erdogan, speaking at a conference in Ankara, pointed to Turkish military exercises underway along Turkey’s border with the Iraqi Kurdish region and said that “our military is not [there] for nothing.”

“We could arrive suddenly one night,” he said, adding that Turkey would take political, economic as well as military measures against Iraqi Kurds’ steps toward independence. He also suggested that Turkey could halt oil flows from a pipeline from northern Iraq.

Ankara called on the international community and especially regional countries not to recognize the vote either and urged Iraq Kurdish leaders to abandon “utopic goals,” accusing them of endangering peace and stability for Iraq and the whole region.

On Saturday, Turkey’s parliament met in an extraordinary session to extend a mandate allowing Turkey’s military to send troops over its southern border if developments in Iraq and Syria are perceived as national security threats.

Initial results from the poll are expected on Tuesday, with the official results to be announced later in the week.

Iraqi Kurds have long dreamed of independence — something the Kurdish people were denied when colonial powers drew the map of the Middle East after World War I. The Kurds form a sizable minority in Turkey, Iran, Syria and Iraq. In Iraq, they have long been at odds with the Baghdad government over the sharing of oil revenues and the fate of disputed territories like Kirkuk.

The Kurds have been a close American ally for decades, and the first U.S. airstrikes in the campaign against IS were launched to protect Irbil. Kurdish forces later regrouped and played a major role in driving the extremists from much of northern Iraq, including Mosul, the country’s second largest city.

But the U.S. has long been opposed to Kurdish moves toward independence, fearing it could lead to the breakup of Iraq and bring even more instability to an already volatile Middle East.

In Baghdad, residents strongly criticized the referendum, saying it would raise sectarian tensions and create an “Israel in Iraq.” An Arabic newspaper headline said “Kurdistan into the unknown,” a reference to the name Kurds use for their region.

“This is a division of Iraq,” said journalist Raad Mohammad, while another Baghdad resident, Ali al-Rubayah, described the referendum as a “black day in the history of the Kurds.”

Lawyer Tariq al-Zubaydi said the referendum was inappropriate amid the “ongoing threat of terrorism and Islamic State” terrorists. “The country is going through a difficult period, this requires a coming together of our efforts,” he said. “A unified country is better for all.”