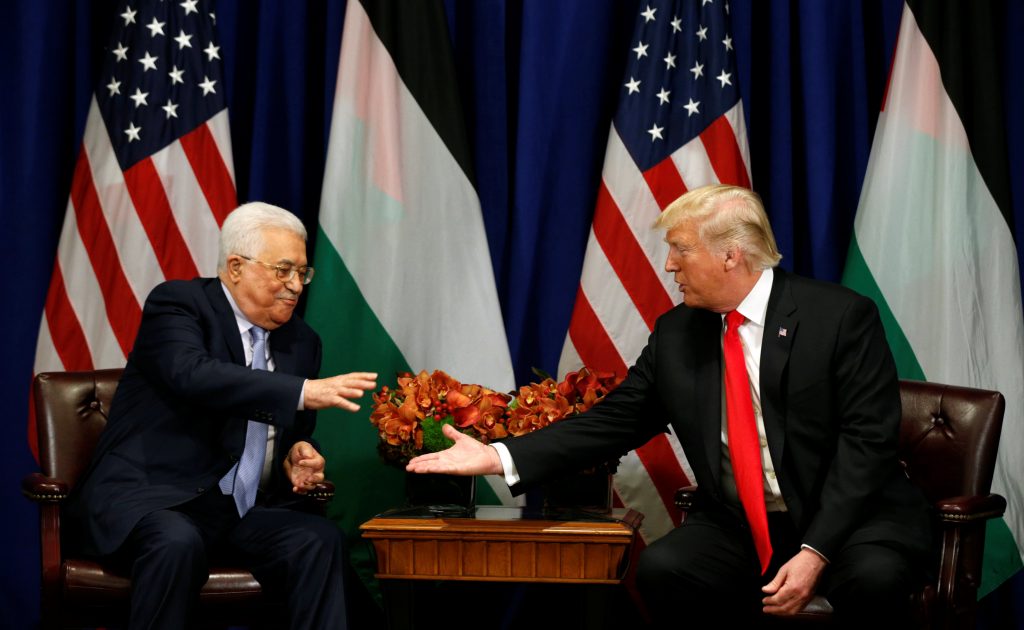 U.S. President Donald Trump told Palestinian President Mahmoud Abbas on the sidelines of the U.N. General Assembly last week, that the White House is working on a new Palestinian-Israeli peace plan, but needs more time to finalize it.

Palestinian and U.S. sources said that Mr. Trump asked Abbas to refrain in the meantime from any unilateral actions that would roil the diplomatic waters and impede the process.

The Palestinian leadership expected the White House to unveil a proposal or position paper within a few weeks, according to Haaretz.

The London newspaper el Arabiya reported on Sunday that a Mideast peace plan being developed by the Trump administration will call for provisional borders for a Palestinian state, while postponing the issue of refugees.

The plan makes no stipulation about the 1967 borders, a condition for negotiations championed by the European Union, the U.N. and demanded by the Palestinians. Instead, it proposes giving the Palestinians Gaza and the areas of Yehudah and Shomron currently under their control. Expansion of that territory could follow at a later time.

The nascent plan has received the endorsement of Saudi Arabia and Egypt, according to the Qatar-linked paper.

There has been little comment on the Trump-Abbas meeting from Palestinian officials.

However, the Palestinian envoy to the United States, Husam Zomlot, told Haaretz that Abbas clarified the Palestinian position to President Trump, including “the path to an agreement leading to the establishment of a sovereign Palestinian state along the 1967 borders.”

The PA reportedly attaches great importance to the fact that neither the White House nor the State Department have made any public reaction to media reports of a new Egyptian effort to reconcile the PA and Hamas. The Palestinian leadership interprets the absence of U.S. criticism as a de facto green light for the move, Haaretz reported.