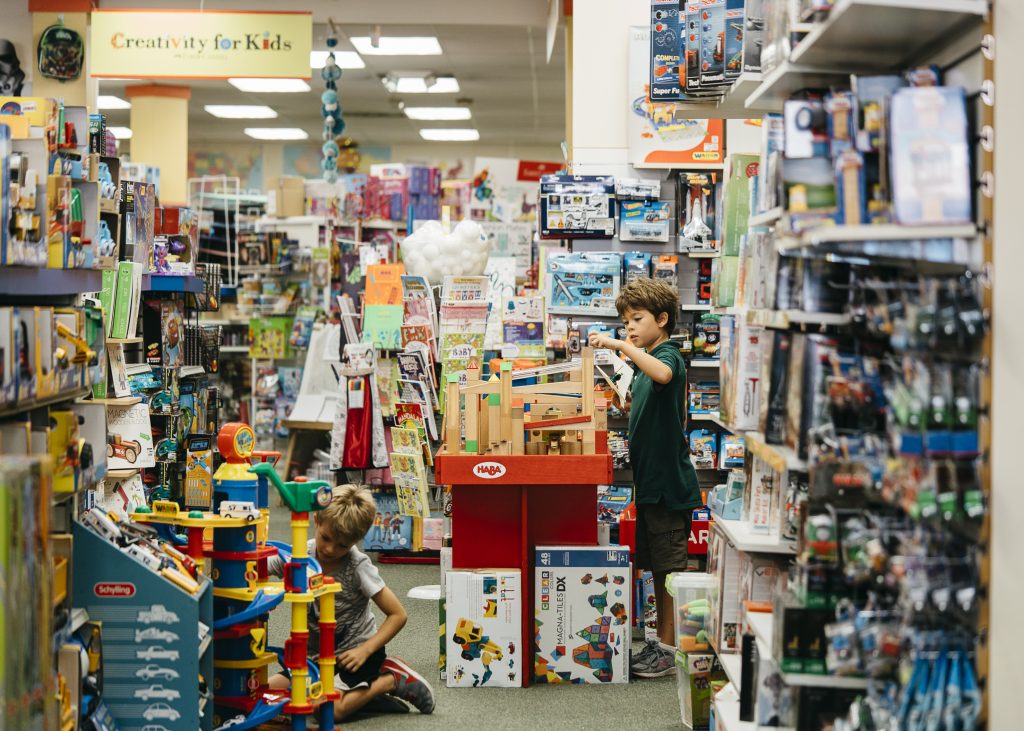 Ella Wiesenfelder has been coming to Barstons Child’s Play her whole life, so naturally it’s where she wanted to be on the afternoon of her eighth birthday.

She had already picked out a Lego spaceship and a magic kit with 150 tricks for herself and was now helping her 6-year-old sister, Cora, make a selection.

“How about this?” she asked, holding up a pony that changes colors in the bath.

“This is fun. It’s much better than shopping online,” she said, “because I don’t know how to use the computer.”

Ella and Cora, it’s fair to say, are not Toys R Us kids.

Last week, the big-box toy retailer filed for bankruptcy protection after a long, losing battle to sell its own brand of fun. Competitors have pulled ahead with better customer service in stores and better shopping experiences, prices and selection online. Ultimately, though, it was a heap of $7.9 billion in debt – mostly dating to a 2005 leveraged buyout – that did it in.

If Toys R Us is a private-equity horror story (not one for the kids), then mom-and-pop neighborhood toy shops are more like a fairy tale.

Here at Child’s Play in Washington, D.C., annual sales have been climbing about 3 percent a year, as parents eschew megastores and online options in favor of the company’s four locations, which together bring in millions in annual revenue.

On a recent weekday afternoon, the store bustled with children. Their parents in tow said they come to the store regularly because they like the carefully curated selection, helpful employees, Lego-building events and the gift wrapping, which can come in handy when you drop in on the way to a birthday party.

“On top of all that, it’s just an amazing place to hang out,” said Mary Freeland, whose eight-year-old son was finding his way around a colorful parking garage. “They let my son play.”

Throughout the country, experts say, independent toy stores are seeing a revival as parents – and their children – look for unique shopping experiences that stand out at a time when so many of their shopping habits have been reduced to impersonal clicks of a button. While adults may be inclined to compare prices or shop from their living rooms, children would rather take their allowances and birthday money to a store that allows them to play and explore.

It’s a wildly different story than at Toys R Us, which for decades was the country’s preeminent toy retailer, with a towering flagship in New York’s Times Square and a ubiquitous icon, Geoffrey the Giraffe. The company had been in free fall for years and analysts said the bankruptcy filing was inevitable.

“Toys R Us, which had basically devolved into a warehouse, did not have the vision or the money to give its customers a great experience,” said Howard Davidowitz, a retail consultant who worked with Toys R Us in the 1980s and 1990s. “For a toy store to survive, they’ve got to create the kind of fun that Amazon can’t.” (Jeffrey P. Bezos, Amazon’s chief executive, owns The Washington Post.)

That kind of fun is what Child’s Play has figured out and perfected over three decades. Its sprawling store in the tony Chevy Chase, Maryland, neighborhood is a maze of displays and play spaces. There’s a Lego section and a fake food section and designated areas for costumes, water guns and puzzles. Sprinkled throughout are bathtub crayons ($6.99), Elmo puppets ($18.99) and scooters ($129.99).

“Kids these days are restless, they’re looking for an interactive experience,” said Susan Lee, a partner at marketing firm Simon Kucher & Partners. “It isn’t enough to just have stacks of toys on a shelf.”

The toys at Child’s Play are chosen with help from developmental psychologists, occupational therapists and teachers. Staffers are trained extensively in child development and are taught to recommend items based on specific considerations.

Need to work on your toddler’s finger strength? Employees might recommend Play-Doh.

Have a child who has trouble losing? Cooperative games such as Forbidden Island or Mole Rats in Space may be the ticket.

Often, parents said, they’ll walk into the store with a few parameters: “I need a $20 gift for a 4-year-old boy.” It’s only a matter of minutes before an employee has suggested something and wrapped it for them. (“Walk into any birthday party around here, and it’s all gift wrap from Child’s Play,” one mother said.)

“Every employee here has at least a five-minute shtick on every item in this store,” employee Shannon Sumner said. “And we all have at least one specialty, whether it’s books or Legos or board games.” (Her expertise: Nerf weaponry and outdoor toys.)

“Nowadays people tend to think of toys as disposable entertainment,” said Steven Aarons, who founded Child’s Play 31 years ago. “But they’re much more than that. They are really important to a child’s development.”

Benjamin Mack was standing in front of the Legos.

“I just like coming and seeing what they have here,” the eight-year-old said. “Sometimes I wish I could buy every single thing in this aisle.”

This is, he said, where he comes to spend the monthly allowance he earns doing chores around the house. Once he earned $21 in one month. Today he was empty-handed.

“I usually focus on the $10 sets, which are more affordable for me,” he said.

“But if I had a lot of money, I’d get those on the top shelf,” he added, pointing to an all-terrain tactical enforcer marked $149.99. “They cost a bunch of hundreds.”

He and his five-year-old brother, he said, live nearby and like to stop in after school.

“I think toy stores have an advantage to stores on your phone or computer,” Benjamin said as he looked at a display of Legos. “Amazon might have more things, but this is easier because you don’t have to look at a screen.”

Nearby, a shopper remembered how employees had tracked down an obscure ancient shark figurine for her twins. Another recalled the time employees opened a board game so her seven-year-old son, Ben, could decide whether it was the right gift for his friend.

“When Ben was looking for a football, they got out a bunch of footballs and played with him,” said Janice Wilding, who had stopped in with her three children. “They actually threw them around in the store. Who else would do that?”

Taking toys out of their boxes and showing how they work is an important part of the job at independent toy stores. It’s also the main reason companies such as Haba, a German toymaker that specializes in wooden toys, only sell to independent retailers.

“The specialty toy market represents our brand in a way that mass retailers just cannot,” said Lea Culliton, president of Haba USA. “We want to work with shop owners who are engaged and knowledgeable, and that’s what today’s parents want, too.”

Back by the board games, Ella and Cora were still looking for the right toy. Their latest selection was a laser tag set for $49.99.

“Please, please,” Cora said, jumping up and down. “Both of us can play.”

Most of the time, Jon said, he does his shopping online. It’s cheaper and easier.

“If I’d had a little foresight, I would’ve bought her birthday toys online too,” he said. “But they like coming here, so what can you do?”

The girls’ pediatrician walked in and said hello. Then Ella and Cora ran into a couple of classmates.

Cora found a foam baseball bat she thought her father would like. (He didn’t.) She considered a Barbie convertible. (“Don’t even think about it,” her older sister told her. “If it’s a car, that means it’s way too much money.”)

“Cora, in two seconds, if you don’t have something, we’re leaving,” their father called out. “Girls, I’m walking out the door.”

Then he spotted a parrot-topped pen. An employee came over to show Cora how it worked: “Here, watch,” she said. “Say your name.”

He paid for the toys. They walked out the door, the girls holding hands, their father holding two bags of toys.