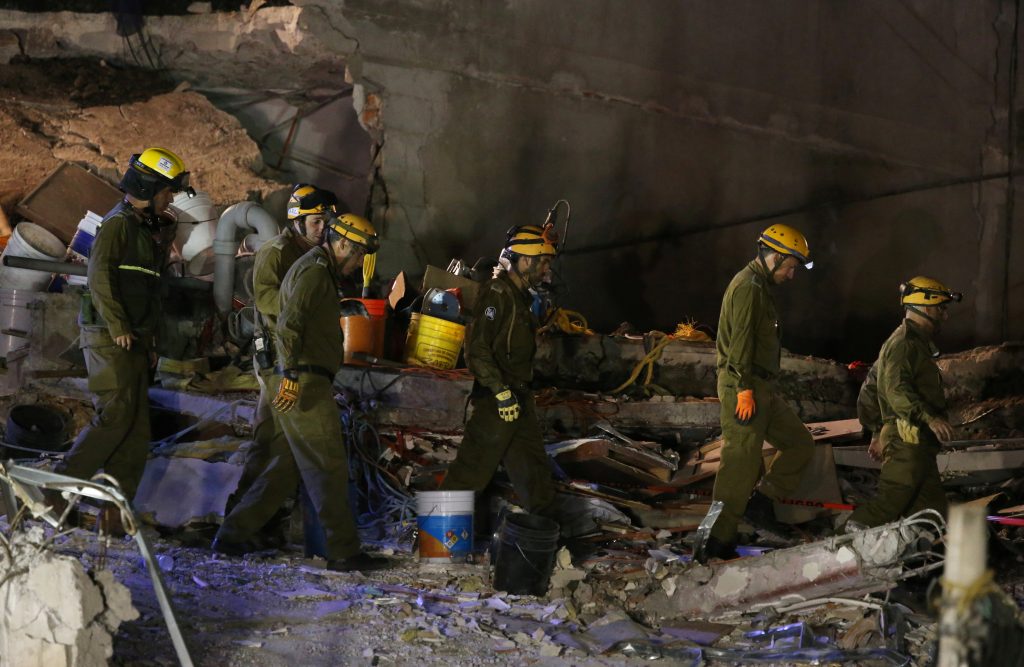 Emergency workers searched by floodlight in smashed buildings for survivors of Mexico’s deadliest earthquake in 32 years amid fading rescue prospects, five nights after the disaster and as President Enrique Pena Nieto urged Mexicans to turn their attention to rebuilding.

The search continued in a ruined office building in Mexico City’s hip Roma neighborhood and a five-story apartment in historic Tlalpan after Tuesday’s 7.1 quake toppled dozens of buildings and killed over 300 people.

The temblor, Mexico’s worst since a 1985 quake killed thousands, may have left some 30,000 badly damaged homes in the adjacent states of Morelos and Puebla and economic losses of $4 billion to $8 billion.

But authorities called off efforts in the upper-middle class Linda Vista zone, after pulling 10 bodies from the rubble, while work at the Tlalpan-based apartment building was briefly halted on Saturday due to a magnitude 6.2 earthquake that shook southern Mexico and spread fear in the capital.

“In Tlalpan, there is still a possibility of finding people alive. It’s URGENT,” read a memo passed around Saturday on social networks.

The government’s response to the disaster is under close scrutiny ahead of a presidential election next year.

Frustration has grown among the thousands left homeless by Tuesday’s quake with critics saying the government reaction pales in comparison to an outpouring of volunteer support, from rescue work to food donations.

When Tuesday’s quake hit, Mexico was already reeling from a Sept. 7 earthquake that killed at least 98 people and was the strongest in the country in 85 years.

Aftershocks on Saturday spread fear among Mexico’s traumatized population, and a plume of ash spewed from the Popocatepetl volcano in another reminder of the country’s volatile geology.

President Enrique Pena Nieto sought to hit back against the criticism, highlighting government aid for survivors on a tour Saturday of Jiquipilas in the poor southern state of Chiapas, which was badly hit by the Sept. 7 quake.

“Be assured that the federal government is here, the state and local governments, supporting you, hand in hand, to rebuild,” he said.

But many Mexicans are wary of politicians using the quake to score political points, ahead of 2018 elections that are seen as a referendum on the Institutional Revolutionary Party’s patchy record since returning to power in 2012.

Francisco Honoraro, a 46-year-old farmer in Mexico City’s fertile Xochimilco district, is living on the streets while he waits for authorities to assess damage to his home, which is currently propped up by wooden beams after the quake.

“This is going to become political, a campaign issue and a source of profit: If you support me and you vote for me, we will help you,” he said.