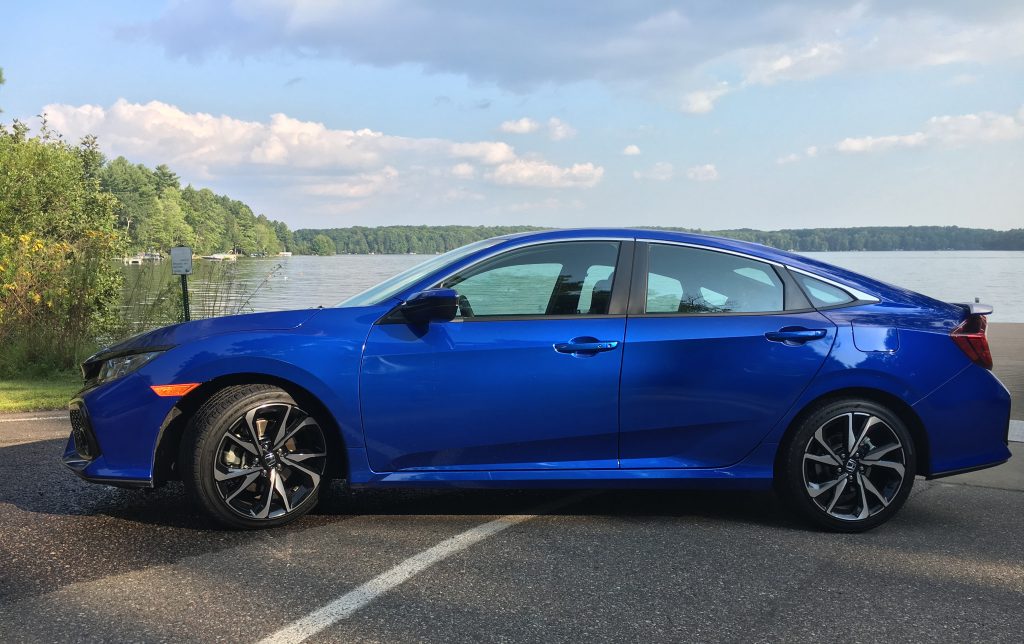 The sign indicated curves ahead. The road was so newly paved it didn’t have a dividing line. The asphalt undulated left and right, with an occasional dip before the far-off turn. There were no houses or driveways, just woods on one side, a meadow on the other. It was the perfect road for the Honda Civic Si.

At another time in another place, the vestiges of rain dried on the iconic Wisconsin race course Road America. Six-figure cars topping 500 horsepower rumbled into the queue. The storied Kink was used to interrupt a straightaway, emphasizing handling and braking more than top speed. There was the rounding ascending Carousel. There were the subtle top-speed luring curves of Kettle Bottoms. It was the perfect road for the Honda Civic Si.

On the highway, at yet another time in yet another place, or in the city, at still a different time and place, the Civic Si was the perfect car for the road.

Compared with other sports cars it’s not that fast, topping out at 137 mph, and it’s not that quick, hitting 60 mph in 6.3 seconds (according to Car and Driver). It handles well, the steering is direct, the throttle is responsive, and the short-rowing six-speed manual transmission feels like an extension of thought. Also available as a coupe, the sedan has four doors, five seats, and enough room inside to comfortably take the family on a road-trip vacation. But at just under $24,000, the 2017 Honda Civic Si might be the best value on the market.

The eighth iteration of the sporting variant of the Civic compact carries on its winning tradition. The 10th-generation Civic was redesigned for model year 2016, winning North American Car of the Year award and, so far in 2017, edging out the Toyota Camry for the first time in 15 years as the best-selling car in America.

The Si gets an upgraded version of the turbo four-cylinder engine in the base Civic, also marking the first time Si gets turbocharged. The high-boost tuning produces 205 horsepower (174 horsepower in the base Civic) and 192 pound-feet of torque (162 pound-feet in the base Civic). It also returned over 40 mpg on the highway in our week of testing. The six-speed manual is a thing of beauty, with seamless rowing and no notching, and responsive uptake on the clutch without being too stubborn or too springy.

It is the ideal starter sports car, more than the rougher Subaru WRX and the heavier Volkswagen GTI. The sedan loses nearly 100 pounds to a svelte 2,906 pounds and the suspension is stiffer overall, giving the sedan excellent and surprising grab with little to no roll. It’s Miata-esque in how well it handles, shifts and steers by being responsive without being quick. The front-wheel drive setup induces plenty of torque steer, however, so when you floor it or hammer it in second, the wheels jump right a bit. Turbo lag is minor, and once the lightweight engine eclipses the 2,000 rpm mark, there is some lovely grrr underscored by turbo whir going through the cabin and out the center-mounted chrome exhaust pipe.

Other differences to the Si style are a wider, taller fascia, same as the Civic hatchback, 18-inch wheels from the Sport Touring trim of the hatch, and a rear spoiler that is different than the hatch.

Herein is where Honda may encounter a problem. If the sedan is mainly the comfort car, and the hatch is, at least aesthetically, a bit more sporting, and the Type R hot hatch coming later this year for the first time in America is the pedestal performance car, then where does the Si fit anymore?

It comes down to price. Value. The Sport Touring trim of the hatch we tested was $28,300; the Type R will be $33,900 until dealers start to gouge; even the well-heeled Touring trim of the base model is more than the Si. The Si, then, is an excellent starter sports car that balances practicality, roominess, safety, and driving thrills better than the competition and other Civics.

Part of the Civic’s popularity is how well Honda has opened up the inside and made clever use of all available space. The body is four inches longer, and the rear seats seem midsize sedan far away. On a long weekend getaway with the kids, there was little bickering about the rear passenger kicking the back of the front. Serenity now.

Honda’s digital instrument cluster is sharp, with large and bright displays that turn to red in sport mode. It’s simple, which is a nice change from other cars. There is a new vehicle info display inside the speedometer that is not simple, at least in execution. A week with the car and I blame the steering wheel controls more than the display. Hitting the info button will project a line of large icons under the speedometer. Hit enter in the center of the four-way arrow control to access the info in that icon, such as trip meter. But then if you hit the right or left arrow it will change the radio station, instead of taking you deeper into the trip meter. It’s good use of the real estate, but there could be more simplification. And a volume knob.