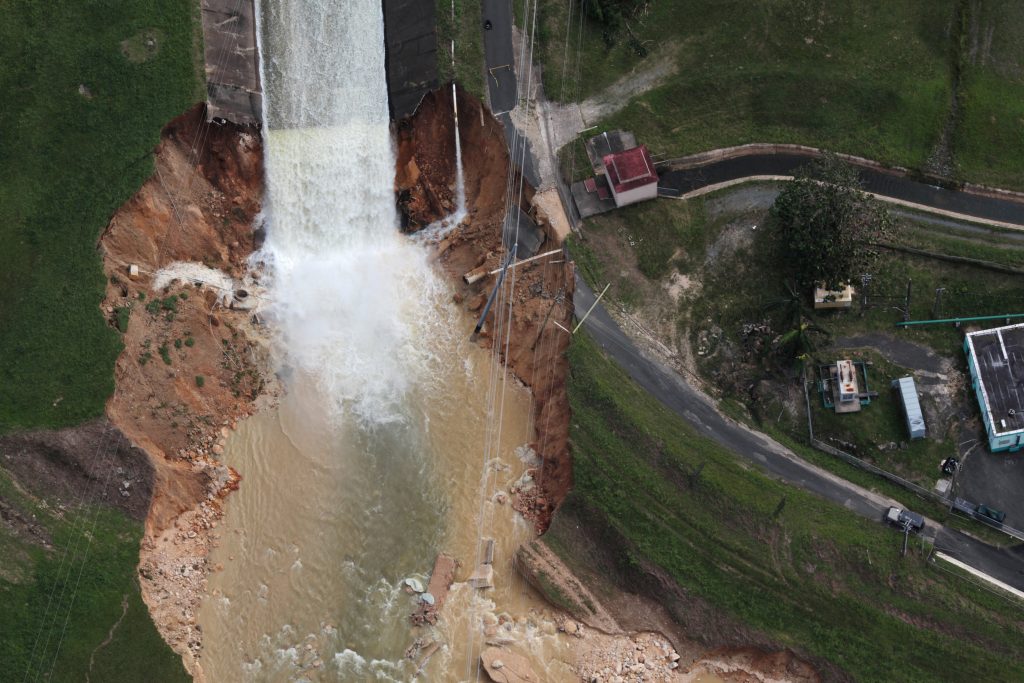 Large amounts of federal aid began moving into Puerto Rico on Saturday, welcomed by local officials who praised the Trump administration’s response but called for the emergency loosening of rules long blamed for condemning the U.S. territory to second-class status.

In northwest Puerto Rico, people began returning to their homes after a spillway eased pressure on a dam that cracked after more than a foot of rain fell in the wake of the hurricane.

The opening of the island’s main port in the capital allowed 11 ships to bring in 1.6 million gallons of water, 23,000 cots, dozens of generators and food. Dozens more shipments are expected in upcoming days.

The federal aid effort is racing to stem a growing humanitarian crisis in towns left without fresh water, fuel, electricity or phone service. Officials with the Federal Emergency Management Agency, which is in charge of the relief effort, said they would take satellite phones to all of Puerto Rico’s towns and cities, more than half of which were cut off following Maria’s devastating crossing of Puerto Rico on Wednesday.

The island’s infrastructure was in sorry shape long before Maria struck. A $73 billion debt crisis has left agencies like the state power company broke. As a result the power company abandoned most basic maintenance in recent years, leaving the island subject to regular blackouts.

A federal control board overseeing Puerto Rico’s finances authorized up to $1 billion in local funds to be used for hurricane response, but Gov. Ricardo Rossello said he would ask for more.

“We’re going to request waivers and other mechanisms so Puerto Rico can respond to this crisis,” he said. “Puerto Rico will practically collect no taxes in the next month.”

U.S. Rep. Nydia Velazquez of New York said she will request a one-year waiver from the Jones Act, a federal law blamed for driving up prices on Puerto Rico by requiring cargo shipments there to move only on U.S. vessels as a means of supporting the U.S. maritime industry.

“We will use all our resources,” Velazquez said. “We need to make Puerto Rico whole again. These are American citizens.”

A group of anxious mayors arrived in the capital to meet with Rossello to present a long list of items they urgently need. The north coastal town of Manati had run out of fuel and fresh water, Mayor Jose Sanchez Gonzalez said.

“Hysteria is starting to spread. The hospital is about to collapse. It’s at capacity,” he said, crying. “We need someone to help us immediately.”

The death toll from Maria in Puerto Rico was at least 10, including two police officers who drowned in floodwaters in the western town of Aguada. That number was expected to climb as officials from remote towns continued to check in with officials in San Juan.

Authorities in the town of Vega Alta on the north coast said they had been unable to reach an entire neighborhood called Fatima, and were particularly worried about residents of a nursing home.

“I need to get there today,” Mayor Oscar Santiago told The Associated Press. “Not tomorrow, today.”

Rossello said Maria would clearly cost more than the last major storm to wallop the island, Hurricane George in September 1998. “This is without a doubt the biggest catastrophe in modern history for Puerto Rico,” he said.

Rossello and other officials praised the federal government for planning its response in detail before the storm hit, a contrast with what Puerto Rico has long seen as the neglect of 3.4 million Americans living in a territory without a vote in Congress or the electoral college.

“This is the first time we get this type of federal coordination,” said Resident Commission Jenniffer Gonzalez, Puerto Rico’s non-voting representative in Washington.

Officials said 1,360 of the island’s 1,600 cellphone towers were downed, and 85 percent of above-ground and underground phone and internet cables were knocked out. With roads blocked and phones dead, officials said, the situation may worsen.

At least 31 lives in all have been lost around the Caribbean due to Maria, including at least 15 on hard-hit Dominica. Haiti reported three deaths; Guadeloupe, two; and the Dominican Republic, one.

Across Puerto Rico, more than 15,000 people are in shelters, including some 2,000 rescued from the north coastal town of Toa Baja. Many Puerto Ricans planned to head to the mainland to temporarily escape the devastation.