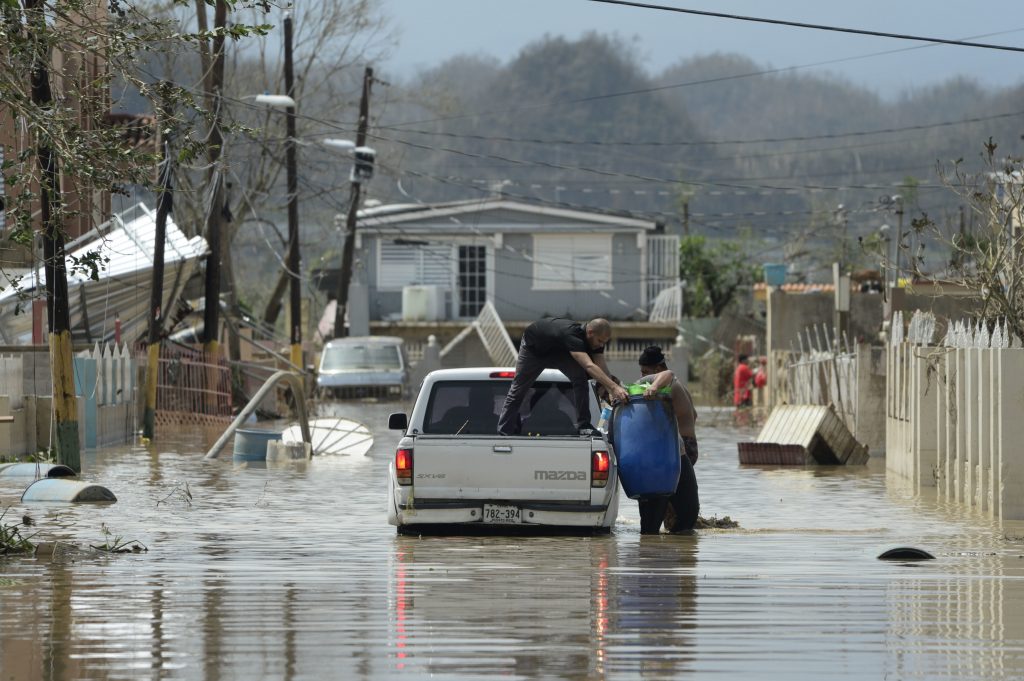 A group of anxious mayors arrived in the capital to meet with Gov. Ricardo Rossello to present a long list of items they urgently need. The north coastal town of Manati had run out of fuel and fresh water, Mayor Jose Sanchez Gonzalez said.

“Hysteria is starting to spread. The hospital is about to collapse. It’s at capacity,” he said, crying. “We need someone to help us immediately.”

The death toll from Maria in Puerto Rico was at least 10, including two police officers who drowned in floodwaters in the western town of Aguada. That number was expected to climb as officials from remote towns continued to check in with officials in San Juan.

Authorities in the town of Vega Alta on the north coast said they had been unable to reach an entire neighborhood called Fatima, and were particularly worried about residents of a nursing home.

“I need to get there today,” Mayor Oscar Santiago told The Associated Press. “Not tomorrow, today.”

Rossello said Maria would clearly cost more than the last major storm to wallop the island, Hurricane George in September 1998. “This is without a doubt the biggest catastrophe in modern history for Puerto Rico,” he said.

A dam upstream of the towns of Quebradillas and Isabela in northwest Puerto Rico was cracked but had not burst by Saturday afternoon as the water continued to pour out of rain-swollen Lake Guajataca. Federal officials said Friday that 70,000 people, the number who live in the surrounding area, would have to be evacuated. But Javier Jimenez, mayor of the nearby town of San Sebastian, said he believed the number was far smaller.

Secretary of Public Affairs Ramon Rosario said about 300 families were in harm’s way.

The governor said there is “significant damage” to the dam and authorities believe it could give way at any moment. “We don’t know how long it’s going to hold. The integrity of the structure has been compromised in a significant way,” Rossello said.

The 345-yard (316-meter) dam, which was built around 1928, holds back a man-made lake covering about 2 square miles (5 square kilometers). More than 15 inches (nearly 40 centimeters) of rain from Maria fell on the surrounding mountains, swelling the reservoir.

Officials said 1,360 of the island’s 1,600 cellphone towers were downed, and 85 percent of above-ground and underground phone and internet cables were knocked out. With roads blocked and phones dead, officials said, the situation may worsen.

“We haven’t seen the extent of the damage,” Rossello told reporters in the capital. Rossello couldn’t say when power might be restored.

Maj. Gen. Derek P. Rydholm, deputy to the chief of the Air Force Reserve, said mobile communications systems were being flown in, but acknowledged “it’s going to take a while” before people in Puerto Rico will be able to communicate with their families outside the island.

The island’s electric grid was in sorry shape long before Maria struck. The territory’s $73 billion debt crisis has left agencies like the state power company broke. It abandoned most basic maintenance in recent years, leaving the island subject to regular blackouts.

Rosello said he was distributing 250 satellite phones from FEMA to mayors across the island to re-establish contact.

At least 31 lives in all have been lost around the Caribbean, including at least 15 on hard-hit Dominica. Haiti reported three deaths; Guadeloupe, two; and the Dominican Republic, one.

Across Puerto Rico, more than 15,000 people are in shelters, including some 2,000 rescued from the north coastal town of Toa Baja.

Some of the island’s 3.4 million people planned to head to the U.S. to temporarily escape the devastation. At least in the short term, though, the soggy misery will continue: Additional rain — up to 6 inches (15 centimeters) — is expected through Saturday.

In San Juan, Neida Febus wandered around her neighborhood with bowls of cooked rice, ground meat and avocado, offering food to the hungry. The damage was so extensive, the 64-year-old retiree said, that she didn’t think the power would be turned back on until the end of the year.

“This storm crushed us from one end of the island to the other,” she said.

Hour-long lines formed at the few gas stations that reopened on Friday and anxious residents feared power could be out for weeks — or even months — and wondered how they would cope.

“I’m from here. I believe we have to step up to the task. If everyone leaves, what are we going to do? With all the pros and the cons, I will stay here,” Israel Molina, 68, who lost roofing from his San Juan mini-market to the storm, said, and then paused. “I might have a different response tomorrow.”