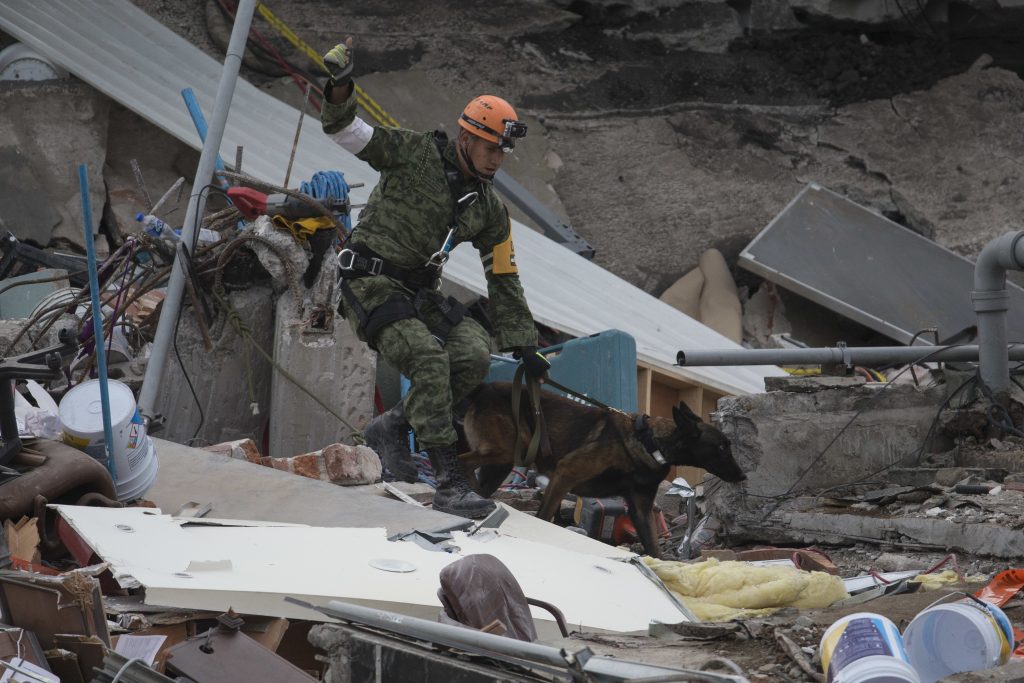 A strong new earthquake shook Mexico on Saturday, toppling already damaged homes and a highway bridge and causing new alarm in a country reeling from two even more powerful quakes in September that together have killed more than 400 people.

The U.S. Geological Survey said the new, magnitude 6.1 temblor was centered about 11 miles south-southeast of Matias Romero in the state of Oaxaca, which was the region most battered by a magnitude 8.1 quake on Sept. 7.

It was among thousands of aftershocks recorded in the wake of that earlier quake, which was the most powerful to hit Mexico in 32 years and killed at least 96 people.

The government of Oaxaca state reported that four people were injured in Juchitan and three in Tlacotepec, but none of their lives were in danger. Another person suffered a broken clavicle in the town of Xadani. Five buildings were damaged and a highway bridge collapsed. The Federal Police agency said the bridge had already been closed due to damage after the Sept. 7 quake.

The state government said in a statement that homes collapsed, but “no human lives were lost.”

U.S. Geological Survey geophysicist Paul Caruso said the new temblor was an aftershock of the 8.1 quake, and after a jolt of that size even buildings left standing can be more vulnerable.

“So a smaller earthquake can cause the damaged buildings to fail,” Caruso said.

“At the moment the greatest damage has been to the Ixtaltepec bridge, which should be rebuilt, and structures with previous damage that collapsed,” President Enrique Pena Nieto tweeted. He said government workers were fanning out in Juchitan to provide help to anyone who needs it.

Jaime Hernandez, director of the Federal Electrical Commission, said the quake knocked out power to 327,000 homes and businesses in Oaxaca but service had been restored to 72 percent of customers within a few hours.

Buildings swayed in Mexico City, where nerves are still raw from Tuesday’s magnitude 7.1 temblor that has killed at least 305 across the region. Many residents and visitors fled homes, hotels and businesses, some in tears.

At the Xoco General Hospital, which is treating the largest number of quake victims, workers ordered visitors to evacuate when seismic alarms began to blare.

Mayor Miguel Angel Mancera said there were no reports of significant new damage in the capital, and rescue efforts related to Tuesday’s quake were continuing. He reported that two people died of apparent heart attacks during the new temblor.

At the site of an office building that collapsed Tuesday and where an around-the-clock search for survivors was still ongoing, rescuers briefly evacuated from atop the pile of rubble after the morning quake before returning to work removing cement, tiles and other debris.

As rescue operations stretched into Day 5, residents throughout the capital have held out hope that dozens still missing might be found alive. More than half the dead — 167 — perished in the capital, while another 73 died in the state of Morelos, 45 in Puebla, 13 in Mexico State, six in Guerrero and one in Oaxaca.