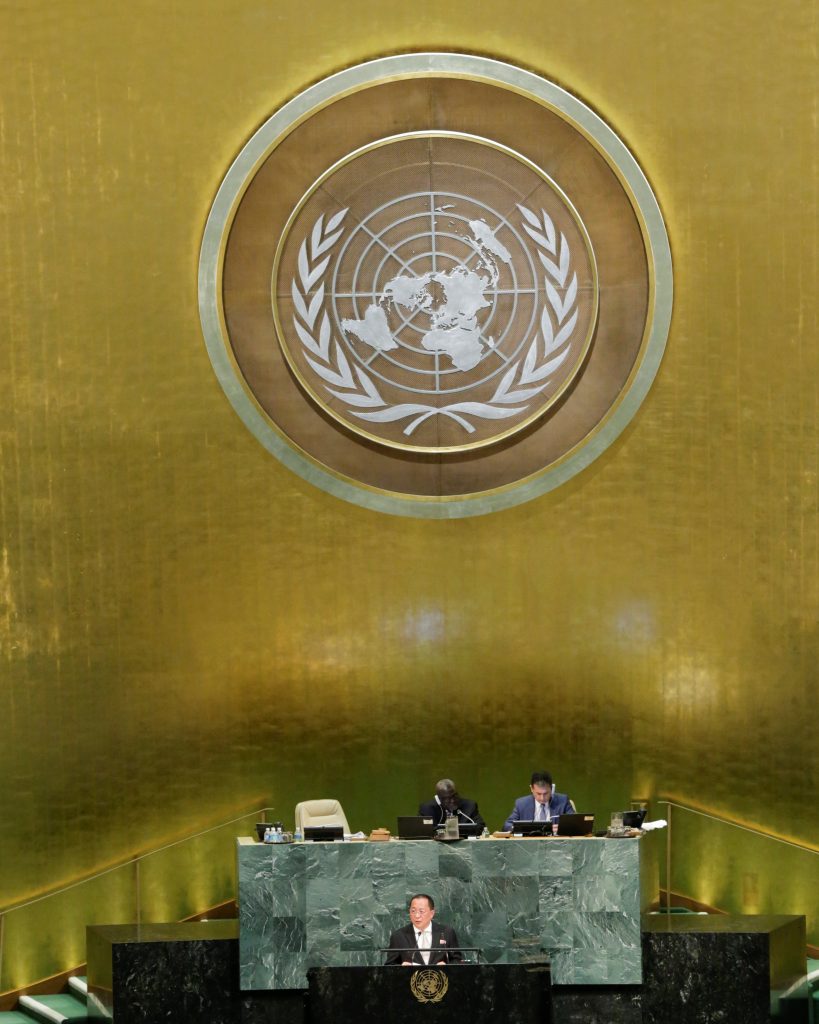 North Korea said on Saturday firing its rockets at the U.S. mainland was “inevitable” after President Donald Trump called Pyongyang’s leader “rocket man,” in a further escalation of rhetoric between the two countries over the North’s nuclear weapons and ballistic missile program.

Ri’s speech capped a week of escalating rhetoric between Washington and Pyongyang, with Trump and Kim Jong Un trading insults. Trump called the North Korean leader a “madman” on Friday, a day after Kim dubbed him a “mentally deranged U.S. dotard.”

On Saturday, the mudslinging continued with Ri calling Trump “a mentally deranged person full of megalomania and complacency” who is trying to turn the United Nations into a “gangsters’ nest.” Ri retorted that Trump himself was on a “suicide mission” after the U.S. president said Kim was on such a mission.

“‘President Evil’ is holding the seat of the U.S. president,” Ri said, warning that Pyongyang was ready to defend itself if the United States showed any sign of conducting a “decapitating operation on our headquarters or military attack against our country.”

“Now we are finally only a few steps away from the final gate of completion of the state nuclear force,” Ri told the annual gathering of world leaders.

He said sanctions would have no effect on Pyongyang’s resolve to develop its nuclear weapons, with the ultimate goal being “balance of power with the U.S.”

Trump announced new U.S. sanctions on Thursday that he said allow targeting of companies and institutions that finance and facilitate trade with North Korea.

Earlier in September, the U.N. Security Council unanimously adopted its ninth round of sanctions on Pyongyang to counter its nuclear and ballistic missiles programs.

The U.S. bombers’ flight was the farthest north of the demilitarized zone separating North and South Korea that any U.S. fighter jet or bomber has flown in the 21st century, the Pentagon said.

“This mission is a demonstration of U.S. resolve and a clear message that the president has many military options to defeat any threat,” said Pentagon spokeswoman Dana White.

“We are prepared to use the full range of military capabilities to defend the U.S. homeland and our allies.”

North Korea has launched dozens of missiles this year, several flying over Japan, as it accelerates its program aimed at enabling it to target the United States with a nuclear-tipped missile.

Pyongyang conducted its sixth and largest nuclear test on Sept. 3 and has threatened to test a hydrogen bomb over the Pacific.

The Pentagon said the B-1B bombers came from Guam and the U.S. Air Force F-15C Eagle fighter escorts came from Okinawa, Japan. It said the operation showed the seriousness with which it took North Korea’s “reckless behavior.”

The patrols came after officials and experts said a small earthquake near North Korea’s nuclear test site on Saturday was probably not man-made, easing fears Pyongyang had exploded another nuclear bomb just weeks after its last one.

China’s Earthquake Administration said the quake was not a nuclear explosion and had the characteristics of a natural tremor.

The CTBTO, or Comprehensive Test-Ban Treaty Organization, which monitors nuclear tests, and officials of the South Korean meteorological agency also said they believed it was a natural quake.

Tensions have continued to rise around the Korean Peninsula since Pyongyang carried out its sixth nuclear test, prompting a new round of U.N. sanctions.

North Korea’s nuclear tests to date have all been underground, and experts say an atmospheric test, which would be the first since one by China in 1980, would be proof of the success of its weapons program.

The North accuses the United States, which has 28,500 troops in South Korea, of planning to invade and regularly threatens to destroy it and its Asian allies.