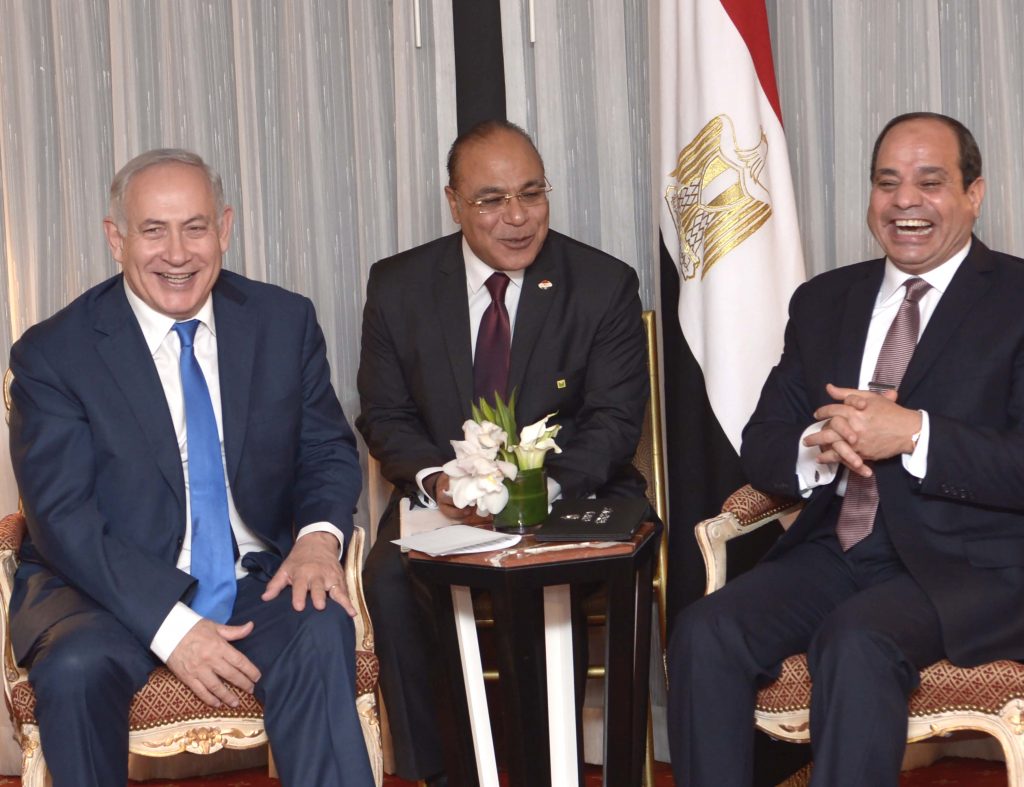 A Lebanese report said Wednesday that Prime Minister Binyamin Netanyahu and Egyptian Present Abdel Fatah Sisi have decided to work towards organizing a summit including the two, Palestinian Authority chief Mahmoud Abbas, and Jordanian King Abdullah. The report in the Al-Ahbar newspaper said that the summit would take place in the winter, either in Sinai or in Washington. The United States has reportedly offered to convince the Saudis to participate as well.

The report comes after a meeting Monday night between Netanyahu and Sisi – the first public meeting between the two, after several secret meetings and numerous phone conversations. In a statement, the Prime Minister’s Office said that the two met for about an hour and a half at Sisi’s hotel. The leaders “conducted a wide-ranging discussion on the issues that affect the region,” and that the Egyptian head of state “expressed willingness to provide assistance in the efforts to bring about peace between Israelis and Palestinians in the region.” According to sources quoted in Israeli media, several other Egyptian officials participated in the meeting, including Foreign Minister Samah Shukry, Intelligence chief Khaled Fauzi, and Abbas Camel, the director of Sisi’s office.

In his speech at the United Nations Monday, Sisi appealed directly to Israelis on the importance of negotiating with Palestinians. “The peace treaty between us has stood the test of time for 40 years now,” said Sisi. “We can repeat this success with the Palestinians, and bring peace and security to Israelis and Palestinians. Do not hesitate – support your political leadership. This opportunity may not repeat itself. We will stand by your side to achieve success.”

Abbas, who is to speak Wednesday at the General Assembly, met with President Donald Trump on Tuesday. A report in the PA newspaper Al-Quds said that the U.S. president had sought to release a joint statement with Abbas, but that the latter refused. According to the report, Abbas disputed the language of the statement, which did not specifically call for Israel to withdraw to the 1967 armistice lines.

Israeli commentators on Channel Two said that Abbas was particularly upset over Trump’s speech – not for what it included, but for what it did not include. Trump spoke for some 40 minutes, covering topics like Iran, Venezuela, North Korea, Iraq, Afghanistan and more – but did not mention the Palestinians even once. “That flies in the face of everything the Palestinians believe about the Middle East conflict – that solving their problem will solve all the other problems,” said one commentator. “You can bet that they are boiling mad now.”