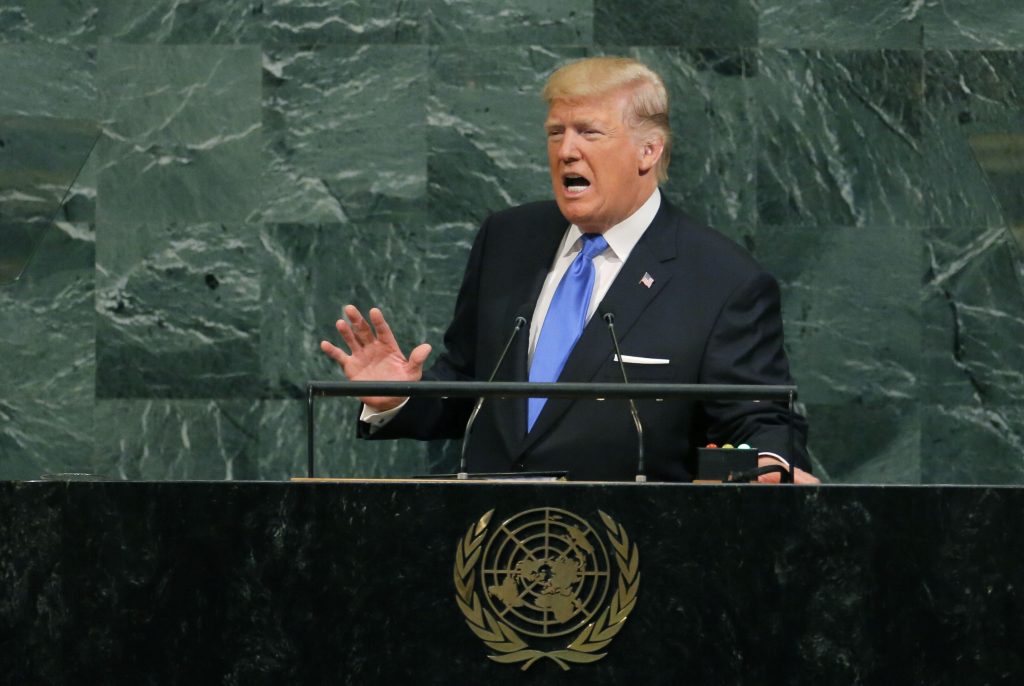 It was Pres. Trump’s most direct threat to attack North Korea for belligerent acts that have included launching ballistic missiles over Japan and conducting underground nuclear tests.

His comments rattled the world leaders gathered before him in the green-marbled U.N. General Assembly hall, where minutes earlier U.N. Secretary-General Antonio Guterres had appealed for statesmanship.

“The United States has great strength and patience, but if it is forced to defend itself or its allies, we will have no choice but to totally destroy North Korea,” Mr. Trump said.

As loud, startled murmurs filled the hall, Mr. Trump described Kim in an acid tone, saying, “Rocket man is on a suicide mission for himself and his regime.”

One man in the audience covered his face with his hands shortly after Pres. Trump made his “totally destroy” comment. Swedish Foreign Minister Margot Wallstrom crossed her arms.

North Korea’s mission to the United Nations did not immediately respond to a request for comment on Mr. Trump’s remarks.

Mr. Trump’s saber-rattling rhetoric was in contrast to the comments of some of his own Cabinet members who have stated their preference for a diplomatic solution.

“Major portions of the world are in conflict,” he said.

His strongest words were directed at North Korea. He urged United Nations member states to work together to isolate the Kim government until it ceases its “hostile” behavior.

In what may have been a veiled prod at China, the North’s major trading partner, Mr. Trump said: “It is an outrage that some nations would not only trade with such a regime but would arm, supply and financially support a country that imperils the world with nuclear conflict.”

Turning to Iran, Mr. Trump called the 2015 nuclear deal negotiated by his predecessor, Barack Obama, an embarrassment and hinted that he may not recertify the agreement when it comes up for a mid-October deadline.

There was no immediate comment from either Iran’s U.N. delegation or its foreign ministry in Tehran.

Mr. Trump, who entered the White House eight months ago, told the 193-member global body that the United States does not seek to impose its will on other nations and will respect other countries’ sovereignty.

“I will defend America’s interests above all else,” he said. “But in fulfilling our obligations to other nations we also realize it’s in everyone’s interest to seek a future where all nations can be sovereign, prosperous and secure.”

Reading carefully from a script, Mr. Trump said the U.S. military would soon be the strongest it has ever been.

“We cannot stand by and watch,” he said.

Shortly before Mr. Trump’s speech, Guterres appealed from the General Assembly lectern for statesmanship to avoid war with North Korea.

“We must not sleepwalk our way into war,” said Guterres, the former prime minister of Portugal.

The U.N. Security Council has unanimously imposed nine rounds of sanctions on North Korea since 2006 and Guterres appealed for the 15-member body to maintain its unity on North Korea.

Pres. Trump has warned North Korea that military action was an option for the United States as Pyongyang has carried out a series of tests toward developing the ability to target the United States with a nuclear-tipped missile.

Israeli Prime Minister Binyamin Netanyahu, a former U.N. ambassador due to address the world body later on Tuesday, said in a statement: “In over 30 years in my experience with the U.N., I never heard a bolder or more courageous speech.”

Financial markets showed little reaction to Mr. Trump’s speech, with most major assets hovering near the unchanged mark on the day.

“He stuck with his script,” said Lennon Sweeting, chief market strategist at XE.com in Toronto. “The dollar/yen jumped around a bit but it’s basically flat. I don’t think we will see any more volatility out of this.”