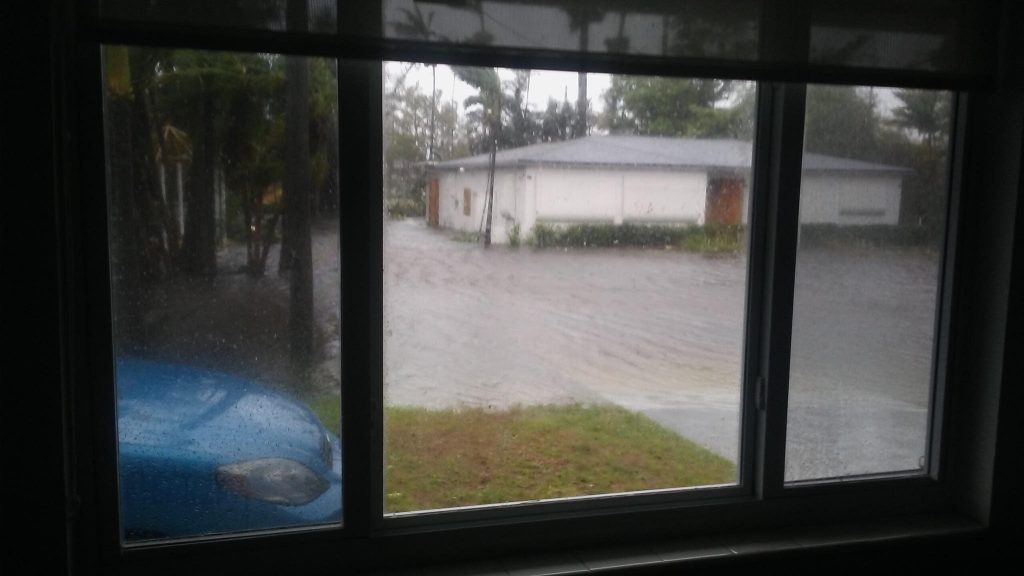 The experience of our evacuation via Atlanta to Lakewood is quite an engaging story.

After all of the news of the flooding in Houston, people were in a complete panic of what Irma would do. Before making final plans to evacuate, I phoned Rabbi Aaron Kotler in Lakewood (father of our staff member Yehudah Kotler) about what to do. He had some experience when his community had to deal with Hurricane Sandy. His first thought was to ride out the storm; after it became known the extent of the damage in the Caribbean he called me and said to evacuate immediately.

I had reserved a few 15-passenger vans (‘just in case’) a few days earlier when I heard about the oncoming hurricane. We now scrambled to rent the vans and had everyone pack — lots of food, clothing, tefillin, sefarim, siddurim, and then our sefer Torah. We then filled up on gasoline and left.

The few local talmidim were picked up from the dormitory by their parents and a few others were able to get flights out; however, the majority (20) were stranded and needed to get out.

I drove one van and Yehudah Kotler of our staff drove the other. My wife, daughter, son-in-law, and grandchildren were in another rental. We had no idea if we’d be returning in the vans a few days after the storm or what. I also had Professor Don Trueva, another staff member, drive my car up to meet us in Atlanta. We were very concerned about the gas shortages that were already everywhere.

On Wednesday night, we were already stuck in gridlock on the Florida Turnpike and Waze showed every path north full of traffic. We slowly passed one service stop after another and the lines for gasoline were huge. They were so long that a mile-plus before the exit, the traffic slowed to a standstill to pass the line. Drivers were getting frantic and panicky. The name Houston was repeated everywhere.

At some point, we switched to the 95 to see if any gas stations at an exit had gasoline. We went from station to station with almost all having their pumps covered with plastic and signs saying “no more gas.” We finally saw a station that had people filling up gas and we cheered. However our excitement was short-lived when we saw the line, which went around the block and many cars in line had shut off their engines. So we headed back onto the Turnpike.

After midnight, we finally found a rest area that had gasoline without huge lines and called each other to pass along the news of which mile marker. Everyone stopped, filled up, davened Maariv, ate supper and then got back on the highway. The traffic was stop-and-go for hours. At 5:30 a.m., we pulled off and found gasoline again and then slept for an hour in the vans and then continued for a bit. At 7:30 we pulled over to daven Shacharis and to make sure we were on full tanks. We tried to make it an adventure, although I had no idea what to expect next or what would happen. We had called ahead to Rabbi Ilan Feldman and he said “Don’t worry, just come!”

At 1:30 in the afternoon, we were in Georgia and headed to find a picnic area where we could have our meal.

After 24 hours on the road, we arrived in Atlanta and headed straight to Rabbi Feldman’s shul, and he was the one out front greeting us: “Welcome! You’re safe now! Go in the back in the social hall and get something to eat and drink. We have made arrangements as to where you’re all sleeping. They will give you all the information. Welcome!”

Talmid Yaakov Gottheil found a piano and began playing and crowds of evacuees listened while enjoying the food.

Later, we took the boys to Rabbi Meir Neuberger’s Yeshivas Ohr Yisroel. Although it’s not a dormitory, the talmidim of the yeshivah quickly converted a room into a bedroom filled with mattresses and linens. The boys and Rebbeim were very welcoming and asked what further arrangements could be made to make everyone more comfortable. After the long trip to Atlanta, the Doresh talmidim slept well that night.

In the morning, we davened in the yeshivah and ate breakfast there. I wanted to distract the bachurim from feeling like refugees and tried to keep them busy and redirected. So after a few arrangements and helping accommodate the hundreds of new arrivals, we went on a trip to climb Stone Mountain. It was an educational trip as well. We had a picnic again and the weather was amazing. No one could imagine the storm that was out there.

Some boys were a bit concerned about what they had left behind, but the Atlanta community did an unbelievable job taking away many people’s fears and kept everyone distracted. One new talmid, who is from another continent, was quite upset and my wife had a short calming talk with him. She later said to me, “Can you imagine, he’s worried and upset about his suit that he left in Florida? What about everyone else who left behind all of their worldly possessions? That is what Hashem must think about our being concerned when we request all of our ‘important’ things and aren’t concerned about His concerns, like all of the sinas chinam, abuse, wars, illnesses, poverty, sadness, etc.”

There were so many people from all over South Florida coming to Atlanta and everyone was accommodated. There were some who were stuck in traffic and had to spend Shabbos elsewhere. Over Shabbos, in his speeches, Rabbi Feldman spoke about some of the phone calls he received from people regarding what to do in that situation.

Friday night, all of the shuls were packed and there were lavish Shabbos seudos set up for all of the guests. My talmidim really enjoyed Shabbos. The weather was great and people’s spirits seemed very high. The storm still hadn’t struck Miami.

Rabbi Feldman spoke about his trip to Houston to help out the community there at the beginning of the week. He was called back to Atlanta when his community began anticipating the evacuation of Florida to Atlanta. All of the shuls worked together to prepare to host South Florida. On Motzoei Shabbos, they arranged an outdoor Hurricane kumzitz and all joined to participate.

We were monitoring the development of Irma and the shofar. I was still hoping to return to Miami for Selichos and Rosh Hashanah in the yeshivah. Irma didn’t seem to be cooperative. Early reports from the people who were staying in our Doresh buildings sent photos of flooded streets and high waters particularly around the beis medrash building. Rabbi Aaron Kotler prevailed upon us to move the yeshivah to Lakewood and he offered to help us reconvene there. Many of the Doresh talmidim live in New York and New Jersey; especially Lakewood. This move would strategically place them closer to home, as well as make their homes available to host the other talmidim who could reconvene there.

On Sunday, we decided to purchase tickets on the 8:00 pm Amtrak train to Philadelphia. We called the rental company who were very accommodating about returning the vans in Atlanta and we packed up for the next leg of our trip. We purchased Chinese food from the kosher restaurant for supper on the train and boarded for the 16-hour ride.

When we arrived in Philadelphia, four vans were waiting to pick us up and bring everyone to Lakewood. When we arrived in Lakewood, it was already arranged who would stay where. Rabbi Kotler told us that BMG would provide food, a beis medrash and classrooms. He also offered to try and arrange some activities and speakers. Rav Shmuel Blech graciously agreed to allow the yeshivah to use his Beis Medrash Anshei Sefard.

We had stayed by the Storch family in Atlanta and we got the telephone number of noted mechanech, Rabbi Sholom Storch in Lakewood, who offered to give a shiur each morning. Rav Dovid Trenk and Rav Blech each gave a shiur. The yeshivah davening was in Rav Blech’s Shul. Breakfast afterwards each day was in BMG. Lunch and supper was brought over from BMG.

Rabbi Kotler’s son Yehudah, who is a dorm counselor and mashpiah in Yeshivas Doresh, arranged various interesting speakers, such as Mr. Sydney Krupnick, an accomplished real estate developer and WWII veteran, who spoke about lessons from his life experiences.

I spoke toward the end of the experience and discussed how important each person’s Torah is and that each step of the journey was worth all of the effort in order to learn and continue growing.