Israel Netanyahu to U.N. on Iran Deal: ‘Fix It or Nix It!’
Israel 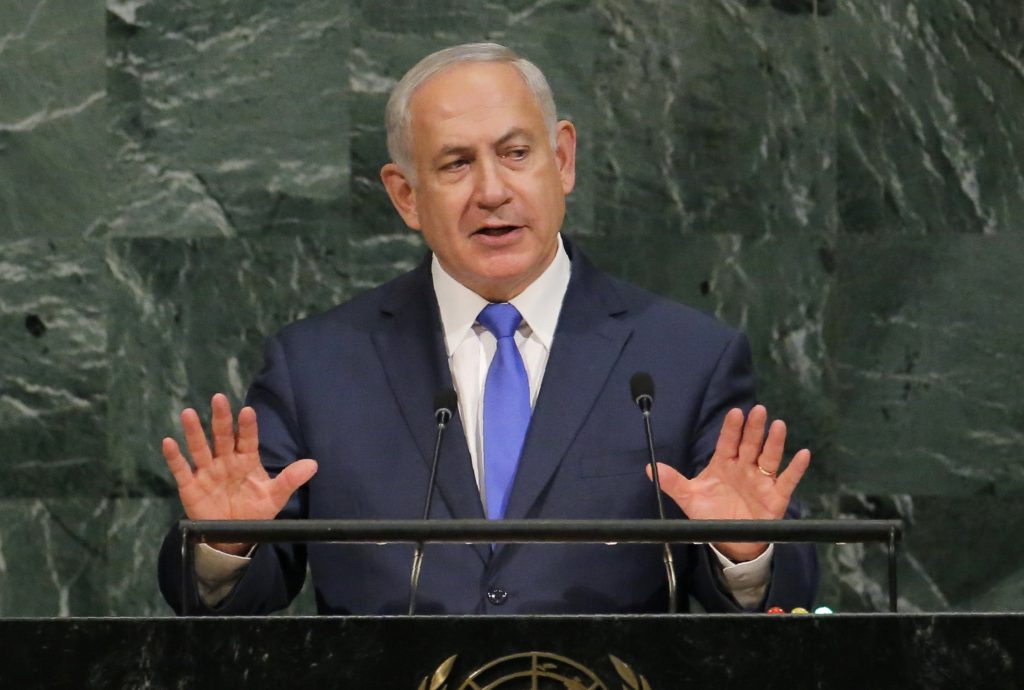 In his address to the U.N. General Assembly on Tuesday, Israeli Prime Minister Binyamin Netanyahu offered no revelations or “gimmicks,” instead sticking to what was essentially a revisiting of criticism of the Iran nuclear deal and expressions of hope for acceptance of Israel among the nations.

Despite speculation beforehand about what surprises he might have prepared, Netanyahu brought with him no visual aids, no “ticking bombs,” this time, and the line in Persian that had been hinted at in media reports was an offer of friendship to the Iranian people and one of simple defiance to the Iranian regime.

“I’ve been ambassador to the U.N., a long-serving prime minister and heard countless speeches,” he says. But “none were bolder, more courageous and forthright than the one delivered by President Trump today.”

Netanyahu put Israel’s position on the Iran nuclear agreement into a neat slogan: “Nix it or fix it.”

He agreed with President Trump’s characterization of the nuclear deal as “an embarrassment,” an agreement that Netanyahu said not only doesn’t prevent the path to a nuclear weapon, “but it actually paves it.”

Netanyahu declared that the so called Sunset Clause, which removes the restrictions on Iran in 10 to 15 years, must go.

“That’s why I said two years ago: The greatest danger is that Iran will not be able to build a single bomb by breaking the deal … they will able to build many nuclear bombs by keeping the deal!

“Imagine the danger of hundreds of nuclear weapons in the hand of a vast Islamist empire with the missiles to deliver them anywhere in the world.”

Netanyahu said that those who argued the agreement would block Iran from getting the bomb and help to moderate the regime were “naïve.”

The argument was made concerning North Korea, and we see what has happened, he said.

“Nixing means more sanctions. Fixing means many things, penalizing Iran for every violation, but most importantly, fixing the deal means getting rid of the sunset clause.”

In a passage that echoed Winston Churchill’s pronouncement after World War II that “an iron curtain” of Soviet tyranny “has descended on the continent” of Europe, Netanyahu declared: “From the Caspian Sea to the Mediterranean, from Tehran to Tartus, an Iranian curtain is descending across the Middle East. Iran spreads this curtain of tyranny and terror over Iraq, Syria, Lebanon and elsewhere, and it pledges to extinguish the light of Israel.

“Today, I have a simple message to Ayatollah Khamenei, the dictator of Iran: The light of Israel will never be extinguished.”

“But I also have a message today for the people of Iran: You are not our enemy; you are our friends. Shomaah doosteh mah hasteed [You are our friends]. One day, my Iranian friends, you will be free from the evil regime that terrorizes you … And when that day of liberation finally comes, the friendship between our two ancient peoples will surely flourish once again.”

Turning to the issue of the U.N.’s treatment of Israel, he said:

“Unfortunately, when it comes to UN decisions about Israel, that simple recognition is too often absent. It was absent last December when the Security Council passed an anti-Israel resolution that set back the cause of peace. It was absent last May, when the World Health Organization adopted – you have to listen to this: the World Health Organization adopted a Syrian-sponsored resolution that criticized Israel for health conditions on the Golan Heights.

“Syria has barrel-bombed, starved, gassed and murdered hundreds of thousands of its own citizens and wounded millions more, while Israel has provided lifesaving medical care to thousands of Syrian victims of that very same carnage. Yet who does the World Health Organization criticize? Israel.

“Is there no limit to the U.N.’s absurdity?

Well, apparently not, because in July, UNESCO declared the Tomb of the Patriarchs in Hebron a Palestinian World Heritage site. That’s worse than fake news. That’s fake history. Mind you, it’s true that Abraham, the father of both Ishmael and Isaac, is buried there, but so too are Isaac, Jacob, Sarah, Rebecca – Sarah is a Jewish name, by the way – and Leah, who just happen to be patriarchs and matriarchs of the Jewish people. You won’t read about that in the latest UNESCO report.”

Mentioning that during the past year he has visited six continents, he looks forward to someday visiting the penguins in Antarctica.

“They can better tell black from white, and right from wrong, than the U.N.,” he quipped.

“When it comes to U.N. decisions about Israel, the simple recognition that some things are black and white is too often absent. It was absent last December when the Security Council passed an anti-Israel resolution. … It was absent last May when the World Health Organization adopted a Syrian-sponsored resolution that criticized Israel for health conditions on the Golan Heights.”

But the overriding message was upbeat. He said that while the U.N. has long been the “epicenter of global anti-Semitism … there are signs of positive change even at the United Nations.”

He concluded by wishing a “Happy new year — Shanah tovah from Israel.”