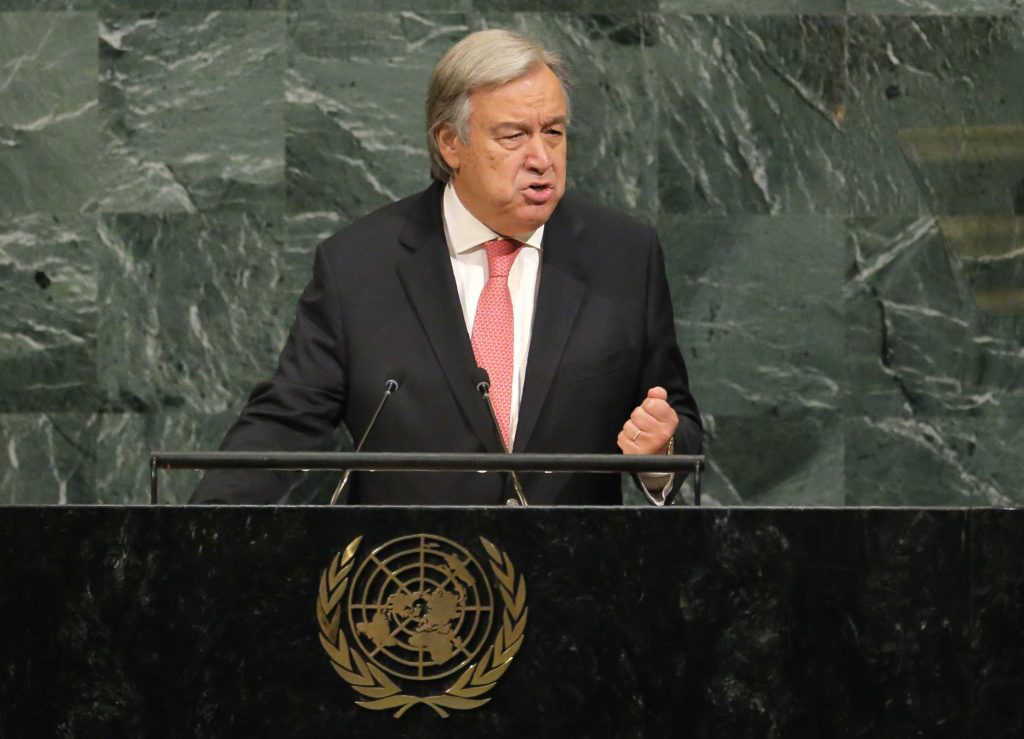 U.N. Secretary-General Antonio Guterres warned the world’s leaders Tuesday that the threat of a nuclear attack is at its highest level since the end of the Cold War and “fiery talk can lead to fatal misunderstandings.”

In his first state-of-the-world report since taking the reins of the United Nations on Jan. 1, Guterres put “nuclear peril” as the leading threat warning that “we must not sleepwalk our way into war.”

The U.N. chief told presidents, prime ministers and monarchs at the opening of the General Assembly’s annual ministerial meeting that millions of people are living in fear “under a shadow of dread cast by the provocative nuclear and missile tests” of North Korea.

His message on “fiery” rhetoric was implicitly directed at North Korea’s leader Kim Jong Un, but also at the United States and President Donald Trump, who has warned of “fire and fury” if North Korea does not back down.

Guterres said a solution to the North Korea must be political and stressed to leaders: “This is a time for statesmanship.”

Beyond the nuclear threat, Guterres painted a grim picture of a troubled world facing grave challenges with many people “hurting and angry” because they “see insecurity rising, inequality growing, conflict spreading and climate changing.”

“Societies are fragmented,” he said. “Political discourse is polarized. Trust within and among countries is being driven down by those who demonize and divide.”

“We are a world in pieces,” Guterres said. “We need to be a world at peace.”

But Guterres said there are seven threats and tests that stand in the way: nuclear peril, terrorism, unresolved conflicts and systematic violations of international humanitarian law, climate change, rising inequality, unintended consequences of innovation, and people on the move.

These issues are expected to dominate the six-day meeting. But on day one, the spotlight was on Pres. Trump and French leader Emmanuel Macron – both of whom were also making their debuts at the General Assembly.

Many world leaders, concerned about U.S. priorities and role in the world, get their first chance to hear and meet Mr. Trump. He spoke after Guterres and Brazil’s president, who for more than 35 years has been the first leader to address the 193-member General Assembly.

He said the U.N. has represented “hope and prospects for a more just world” for the last 70 years and at “this time in history, marked by so much uncertainty and instability, we need more diplomacy not less” – and “we need the U.N. more than before.”

But Temer said it is imperative to reform the U.N., particularly to expand the powerful Security Council to align it with the reality of the 21st century. Brazil is part of a group with Germany, India and Japan seeking permanent seats on the council.

Pres. Trump told leaders that the United States seeks harmony and friendship, not conflict and strife on the world stage, but he warned that nobody should take advantage of America.

He threatened to “totally destroy North Korea” if the United States is forced to defend itself or its allies against aggression. He called Iran an “economically depleted rogue state” whose chief export is violence.

And Pres. Trump said all responsible nations must work together to confront terrorists and “the Islamic extremists that inspire them.” And “it is time to expose and hold responsible” nations that provide funding and safe harbor to terror groups,” he said.

Not far behind North Korea on the list of issues needing urgent international attention is the plight of Myanmar’s Rohingya Muslims, victims of what Guterres calls a campaign of “ethnic cleansing” that has driven nearly 400,000 to flee into Bangladesh in the past three weeks.

Facing accusations of ethnic cleansing from Guterres and the U.N. human rights chief, Myanmar leader Aung San Suu Kyi earlier Tuesday defended the government and said her country does not fear international scrutiny. She invited diplomats to see some areas for themselves.

Guterres told leaders in his General Assembly speech that “I take note” of Suu Kyi’s speech.

“We are all shocked by the dramatic escalation of sectarian tensions in Myanmar’s Rakhine State,” he said. “The authorities in Myanmar must end the military operations, and allow unhindered humanitarian access. They must also address the grievances of the Rohingya, whose status has been left unresolved for far too long.”

The secretary-general has repeatedly focused on the major challenge posed by climate change.

The world leaders gathered as Hurricane Maria, a Category 5 storm, smashed the small Caribbean nation of Dominica with 160 mph winds. It ripped the roof off even the prime minister’s residence and caused what he called “mind-boggling” devastation. The storm was on a track to strike Puerto Rico on Wednesday.

On Monday, Guterres and top government officials from several countries devastated by the other Category 5 storm, Hurricane Irma, addressed a hastily called U.N. meeting and appealed for help to rebuild following that storm’s destruction.

Guterres called this year’s hurricane season “the most violent on record” and warned that extreme weather linked to climate change is having an impact all over the world, “including floods in southern Asia and landslides and droughts in Africa.”