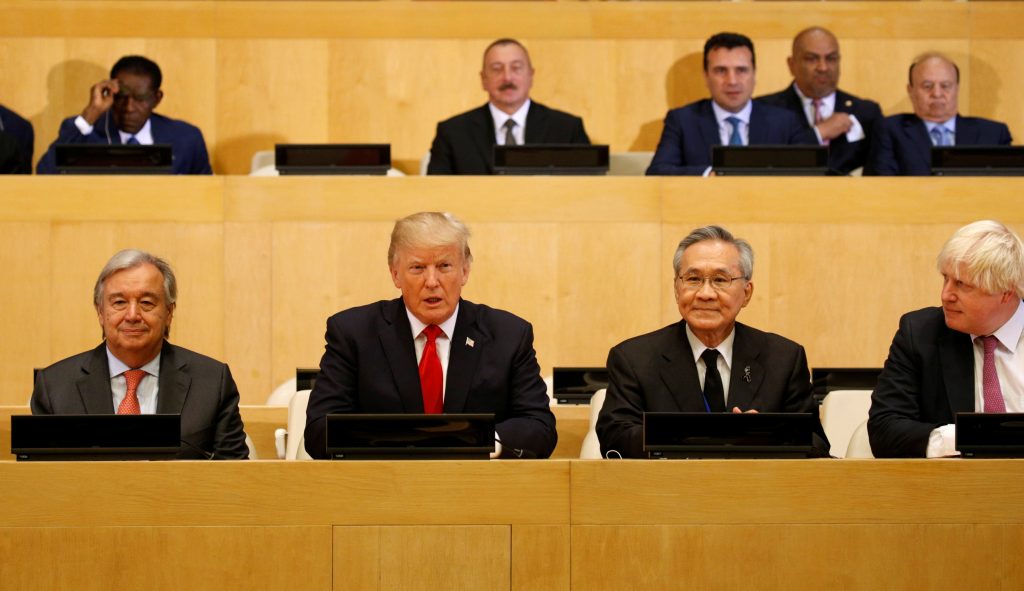 President Donald Trump will urge United Nations member states on Tuesday to turn up the pressure on North Korea to give up its nuclear weapons, using his maiden speech to the world body to address what he considers the top global challenge.

President Trump’s speech will mark his latest attempt to lay out his “America First” vision for a U.S. foreign policy that is aimed at downgrading global bureaucracies, basing alliances on shared interests, and steering Washington away from nation-building exercises abroad.

President Trump’s first major turn on the global platform offered by the United Nations has been dominated by Iran and North Korea, which have been the focus of his talks with other world leaders.

Even so, he has found time to criticize the world body, alleging gross mismanagement and demanding that the United States, the largest donor to the United Nations, get more for its investment.

In his speech, he will seek to rally the world to help the United States and its Asian allies reduce North Korea to pariah status and pressure Iran to rein in everything from ballistic missile launches to interference in Syria.

With North Korean nuclear tests and missile launches stirring global tensions, President Trump’s move on Pyongyang comes as the U.S. ambassador to the United States, Nikki Haley, says that most non-military options have all but been exhausted.

A senior White House official, briefing reporters on the contents of the speech, said President Trump would single out North Korea for “destabilizing, hostile and dangerous behavior.”

North Korea’s official KCNA news agency said on Monday that the more sanctions that Washington and its allies imposed on Pyongyang, the faster it would move to complete its nuclear plans.

President Trump will also voice concern about Iran, which aides say he considers in violation of the spirit of a 2015 deal negotiated by his Democratic predecessor, Barack Obama, and aimed at containing Iran’s nuclear program.

“Theirs is a shared menace and nations cannot be bystanders to history, and if we don’t confront the threats now, they will only gather force and become more formidable,” the official said of North Korea and Iran.

President Trump’s rhetoric against Iran, coming as he appears to be leaning against recertifying the nuclear deal by a mid-October deadline, prompted a retort from Rouhani on Monday.

Rouhani told CNN that exiting the Iran nuclear deal “would carry a high cost for the United States of America, and I do not believe Americans would be willing to pay such a high cost for something that will be useless for them.”