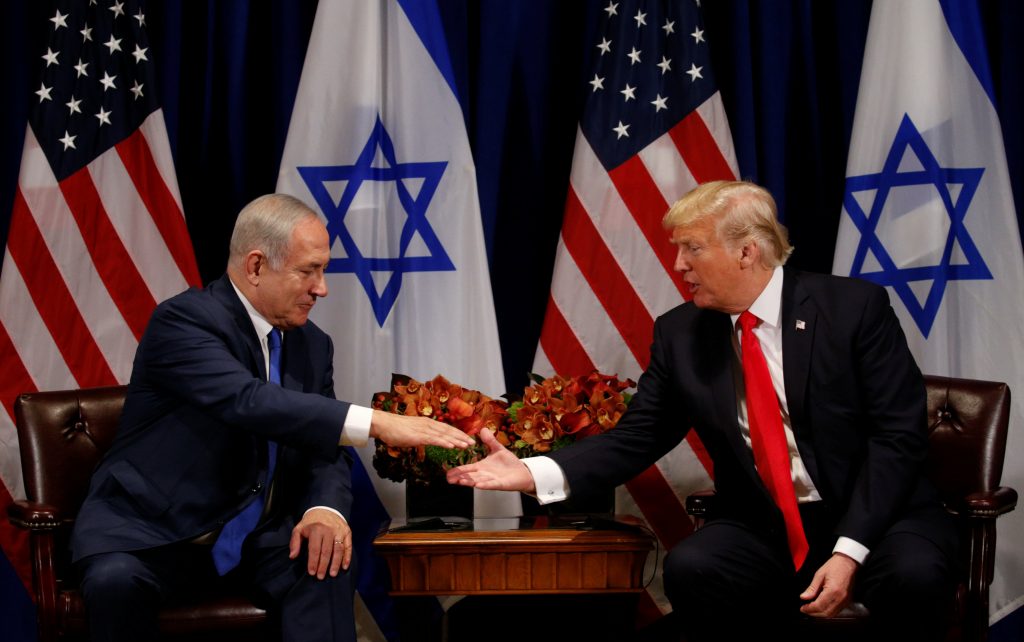 In a brief appearance with reporters just before their meeting on the sidelines of the 72nd session of the U.N. General Assembly Monday, U.S. President Donald Trump and Israeli Prime Minister Binyamin Netanyahu acknowledged that Iran and Mideast peacemaking were to be discussed.

The two sat side by side in a room of the Palace Hotel in Manhattan in the warm and friendly atmosphere that has characterized their relationship, in the much commented-on contrast to the always tense air between President Barack Obama and Netanyahu.

“Prime Minister Netanyahu has been a friend of mine for many years. We are going to talk about many important things, including the peace talks between Israel and the Palestinians. We think there is a good chance that this will happen. I think Israel wants peace, and that the Palestinians want to see it.”

“History tells us that this is impossible — in my opinion it is possible,” the president said.

Then he changed the subject, saying that he was looking forward to discussing “how we can address together the terrible nuclear deal with Iran” and how to repel Iran’s “growing aggression in the region, specially in Syria.”

Netanyahu added that “under President Trump” America support for Israel in the U.N. has been “strong” and full of “clarity and conviction. And I want to thank you,” he added. No mention was made of U.S. ambassador to the U.N. Nikki Haley, who was reportedly keeping a low profile during her boss’s visit.

As the press conference broke up, one of the reporters called out to ask Trump what he’s going to do about the Iran nuclear accord.

“You’ll be seeing very soon,” Trump answered, as he and Netanyahu walked out together.