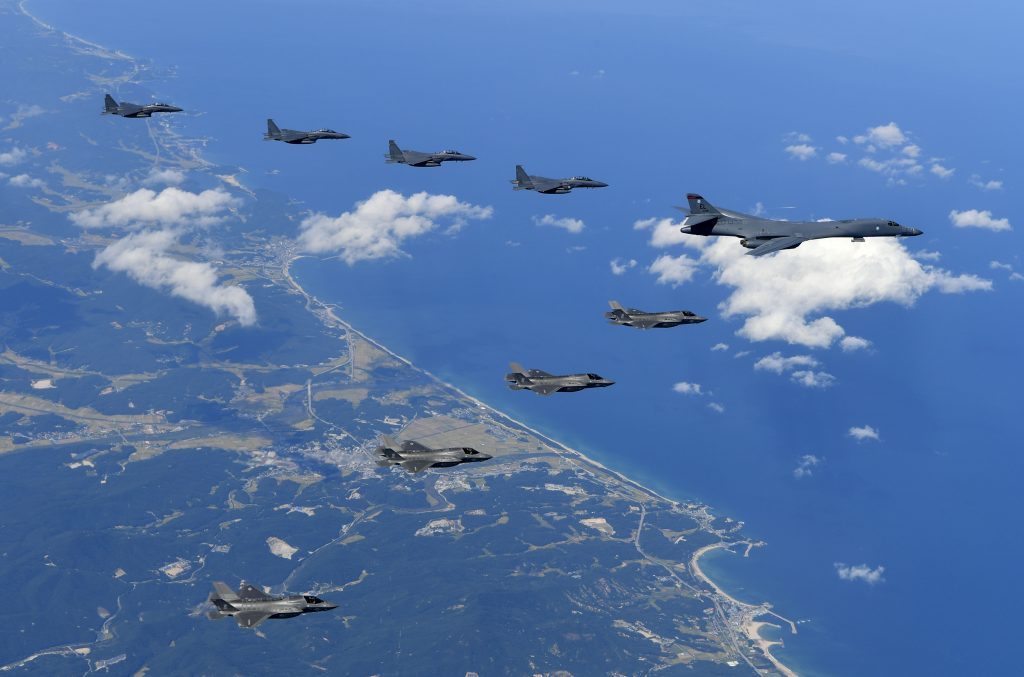 The U.S. military staged bombing drills with South Korea over the Korean peninsula, and Russia and China began naval exercises ahead of a U.N. General Assembly meeting on Tuesday where North Korea’s nuclear threat is likely to loom large.

The flurry of military drills came after Pyongyang fired another mid-range ballistic missile over Japan on Friday and the reclusive North conducted its sixth and most powerful nuclear test on Sept. 3 in defiance of United Nations sanctions and other international pressure.

The joint drills were being conducted “two to three times a month these days,” Defense Minister Song Young-moo told a parliamentary hearing on Monday.

In Beijing, the official Xinhua news agency said China and Russia began naval drills off the Russian far eastern port of Vladivostok, not far from the Russia-North Korea border.

Those drills were being conducted between Peter the Great Bay, near Vladivostok, and the southern part of the Sea of Okhotsk, to the north of Japan, it said.

The drills are the second part of China-Russian naval exercises this year, the first part of which was staged in the Baltic in July. Xinhua did not directly link the drills to current tension over North Korea.

China and Russia have repeatedly called for a peaceful solution and talks to resolve the issue.

On Sunday, however, U.S. Ambassador to the United Nations Nikki Haley said the U.N. Security Council had run out of options on containing North Korea’s nuclear program and the United States might have to turn the matter over to the Pentagon.

In response, Chinese Foreign Ministry spokesman Lu Kang said the most pressing task was for all parties to enforce the latest U.N. resolutions on North Korea fully, rather than “deliberately complicating the issue.”

Military threats from various parties have not promoted a resolution to the issue, he said.

“This is not beneficial to a final resolution to the peninsula nuclear issue,” Lu told a daily news briefing.

President Donald Trump has vowed that North Korea will never be able to threaten the United States with a nuclear-tipped ballistic missile.

Asked about Trump’s warning last month that the North Korean threat to the United States would be met with “fire and fury,” Haley said, “It was not an empty threat.”

Washington has also asked China to do more to rein in its neighbor and ally, while Beijing has urged the United States to refrain from making threats against the North.

Gasoline and diesel prices in the North have surged since the latest nuclear test, according to market data analyzed by Reuters on Monday.

The international community must remain united and enforce sanctions against North Korea after its repeated launch of ballistic missiles, Japanese Prime Minister Shinzo Abe said in an editorial in the New York Times on Sunday.

Such tests were in violation of Security Council resolutions and showed that North Korea could now target the United States or Europe, he wrote.

Abe also said diplomacy and dialogue would not work with North Korea and concerted pressure by the entire international community was essential to tackle the threats posed by the North and its leader, Kim Jong Un.

However, the official China Daily argued on Monday that sanctions should be given time to bite and that the door must be left open to talks.

“With its Friday missile launch, Pyongyang wanted to give the impression that sanctions will not work,” it said in an editorial. “Some people have fallen for that and immediately echoed the suggestion, pointing to the failure of past sanctions to achieve their purpose.

“But that past sanctions did not work does not mean they will not. It is too early to claim failure because the latest sanctions have hardly begun to take effect. Giving the sanctions time to bite is the best way to make Pyongyang reconsider,” the newspaper said.

Pyongyang has launched dozens of missiles as it accelerates a weapons program designed to provide the ability to target the United States with a powerful, nuclear-tipped missile.

It says such programs are needed as a deterrent against invasion by the United States, which has 28,500 troops stationed in South Korea. On Saturday, it said it aimed to reach an “equilibrium” of military force with the United States.