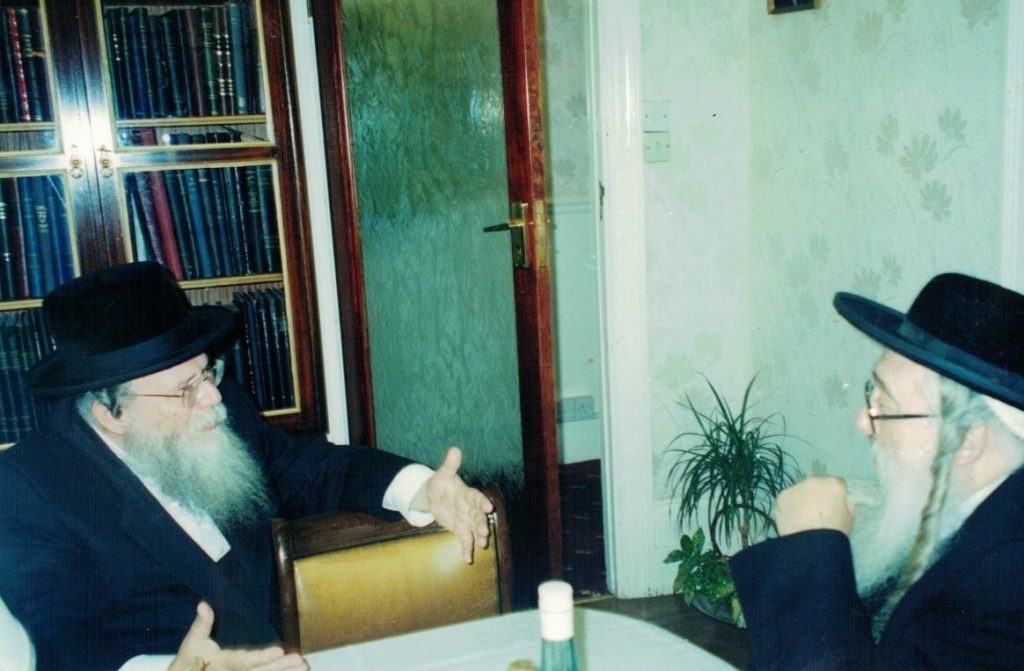 The London kehillah was greatly saddened by the sudden petirah on Sunday of Harav Moishe Chaim Bransdorfer, zt”l. Harav Bransdorfer was a living paradigm of the burning fire for Torah and Chassidus that was aflame in the hearts of previous generations.

Harav Moishe Chaim was born in 1946, immediately after the War. His parents found refuge in the DP Camp in Lausanne, Switzerland. Their son was the first baby born in the camp after the devastation of the War. He symbolised the wondrous rebirth of Klal Yisrael after Churban Europa. Reb Shlomo Stern, z”l, was his mohel and the Stropfkeve Rav, z”l, was his sandek ; both these tzaddikim had miraculously escaped from Pressburg.

In the years that followed, his father Reb Hershel Bransdorfer, z”l, took his family to Antwerp, to rebuild the remnants of the kehillah. Moishe Chaim learnt in Yesoidei Hatorah School and in the Bobov shtiebel. He was very close to Harav Itzikel,of Pshevorsk zy”a, and even in his youth, he gained a reputation for learning with great hasmadah. After spending years learning in Wilryk Yeshivah under Harav Yehudah Aryeh Treger, zt”l, he continued his learning in Eretz Yisrael in Belz Yeshivah – he was a talmid of Harav Moshe Shuvak. He also learned in the Tchebiner Yeshivah, where he learned with the Rosh Yeshivah Harav Boruch Shimon Schneersohn, zt”l, and was highly valued as a true lamdan by Harav Dov Berish Weidenfeld, the Tchebiner Rav, zt”l.

Rav Moishe Chaim became a highly prized bachur. He would be one of the cornerstones on which bnei Torah would be rebuilt after the destruction of the War. He married, tbl”c, his eishes chayil, the daughter of Reb Bunem Hirschler, z”l, one of the highly respected members of the London kehillah. The young couple moved to London, and Rav Moishe Chaim joined Rav Wasserman’s Kollel, the forerunner to Rabinow Kollel. Once again, he endeared himself greatly to all those around him. His depth of learning and his hasmadah were an inspiration for everyone. He was appointed Rosh Hakollel in Belz Beis Hamedrash, 99 Bethune Road and later became a popular maggid shiur in Satmar Cheder.

Harav Bransdorfer excelled in harbotzas haTorah. He was known for his ability to plumb the depths of intricate sugyos and explain them clearly for his talmidim. He taught hundreds of talmidim to value yashrus haTorah. The Steipler Gaon, zt”l, gave him the accolade of a true ben Torah. Harav Leib Gurwicz, the Gateshead Rosh Yeshivah, zt”l, also greatly praised his learning.

In 1977 Rav Moishe Chaim was invited to become Rosh Kollel in Hager’s Kollel, Golders Green. He held this position and continued to be marbitz Torah for 40 years, right up until shortly before his petirah. He was continuously immersed in Torah wherever he went. Even when he was unwell, a visitor found him in a deep sugya with an open Gemara Menachos and Sefer Chazon Yechezkel on Tosefta in front of him.

Harav Bransdorfer was niftar following an extended illness. A very large crowd gathered outside his house on Sunday afternoon for the levayah. The maspidim were led by the Mara d’Asra Harav Ephraim Padwa, who described the niftar as a ‘shtik Torah’. Following his many years immersed in Torah, his whole being was transformed into the personification of a ben Torah. Rav Gershon Hager was maspid on behalf of Hager’s Kollel. He elaborated on the ability of the niftar to impress others with his appearance as a talmid chacham. Rav Chaim Halpern emotionally described his greatness. Rav Shimon Hirshler, brother-in-law of the niftar, tearfully declared that he was surely included in the tzaddikim who were sealed in the Sefer Hachaim for eternal life. Rav Moshe Friedman, son of the Rav of the Belz Shtiebel and Rav Moshe Halpern, Rav Beis Hamedrash Beis Shmuel both spoke on the incredible yegias haTorah demonstrated by Rav Moshe Chaim throughout his life. Finally, two sons of the niftar, Reb Yidel and Reb Berisch, were maspid their father. Rav Moshe Chaim was continually ablaze with the passion of true Chassidus that warmed all those who came within his influence. He had a dvar Torah on his lips in every situation. His outstanding middah was the pursuit of emes, in his learning and equally throughout his life.

Harav Moishe Chaim is survived by his eishes chayil who was his support and strength for all his harbotzas haTorah, his children and grandchildren, together with the many talmidim who were inspired by him and who follow in his ways.