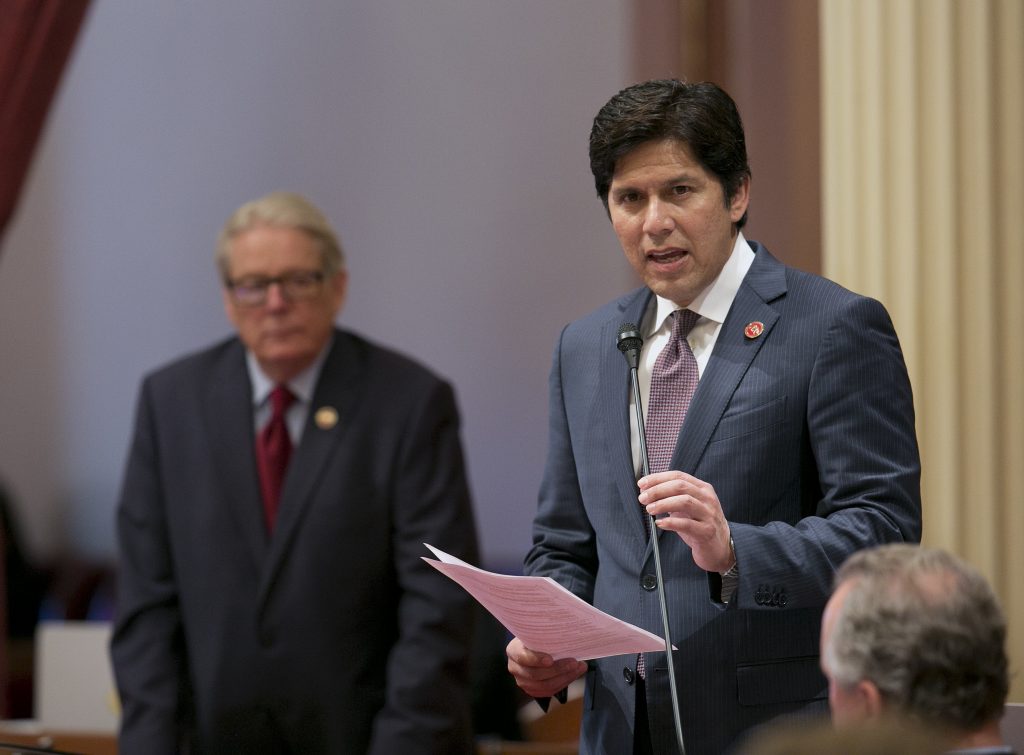 California lawmakers on Saturday passed a “sanctuary state” bill to protect immigrants without legal residency in the U.S., part of a broader push by Democrats to counter expanded deportation orders under the Trump administration.

The legislation by Democratic Sen. Kevin de Leon, the most far-reaching of its kind in the country, would limit state and local law enforcement communication with federal immigration authorities, and prevent officers from questioning and holding people on immigration violations.

After passionate debate in both houses of the Legislature, staunch opposition from Republican sheriffs and threats from Trump administration officials against sanctuary cities, Senate Bill 54 was approved Saturday by a 27-11 vote along party lines. But the bill sent to Gov. Jerry Brown drastically scaled back the version first introduced, the result of tough negotiations between Brown and De Leon in the final weeks of the legislative session.

On the Senate floor minutes before 2 a.m. on Saturday, De Leon said the changes were reasonable, and reflected a powerful compromise between law enforcement officials and advocates.

“These amendments do not mean to erode the core mission of this measure, which is to protect hardworking families that have contributed greatly to our culture and the economy,” he said. “This is a measure that reflects the values of who we are as a great state.”

Officially dubbed the California Values Act, the legislation initially would have prohibited state and local law enforcement agencies from using any resources to hold or question people or share information about them with federal immigration agents unless they had violent or serious criminal convictions.

After talks with Brown, amendments to the bill made last week would allow federal immigration authorities to keep working with state corrections officials and to continue entering county jails to question immigrants. The legislation would also permit police and sheriffs to share information and transfer people to immigration authorities if they have been convicted of one or more crimes from a list of 800 outlined in a previous law, the California Trust Act.

Some immigrant rights advocates who were previously disappointed with the list of offenses under the Trust Act were dismayed to see the same exceptions applied in the so-called sanctuary state bill. The list includes many violent and serious crimes, as well as some nonviolent charges and “wobblers,” offenses that can be charged as a felony or misdemeanor, which advocates said has the potential to ensnare people who do not pose a danger to the public.

But immigrant rights groups did not withdraw their support for Senate Bill 54 and also won some concessions. Under the additions to the bill, the California Department of Corrections and Rehabilitation would have to develop new standards to protect people held on immigration violations, and to allow immigrant inmates to receive credits toward their sentences serviced if they undergo rehabilitation and educational programs while incarcerated.

The state attorney general’s office would have to develop recommendations that limit immigration agents’ access to personal information. The attorney general also has broad authority under the state Constitution to ensure that police and sheriffs agencies follow SB 54’s provisions should it be signed into law.

“This was a hard-fought effort, but the end product was worth the fight,” Jennie Pasquarella, immigrants’ rights director with the American Civil Liberties Union of California, said in a statement Saturday.

In their respective chambers Friday, at least 20 members of the Assembly and six members of the Senate took the floor for debate on the bill, voicing complex stances on illegal immigration, federalism and the diversity of families in California.

GOP Assemblyman Steven Choi, a first-generation immigrant from South Korea, said that he came to the U.S. legally and that the bill created “chaos” for a country built on law and order.

Others pointed to the opposition from sheriffs organizations, saying the bill would tie officers’ hands, allowing serial thieves, chronic drug abusers and gang members to slip through the cracks. Supporters countered the Trump administration was trying to paint all immigrants in the country illegally as criminals.

They pointed to provisions in the bill that would make hospitals, schools and courthouses safe zones for immigrants from federal immigration authorities at a time of fear for some communities.

“We are ironically ending this session the way we started, talking about protecting the most vulnerable among us,” Sen. Ricardo Lara, a Democrat, said.

De Leon introduced SB 54 on what was an unusually acrimonious first day of the 2017 legislative session, as lawmakers in both chambers were locked in bitter debate over the still newly elected President Donald Trump.

It was at the center of a legislative package filed by Democrats in an attempt to protect more than 2.3 million people living in the state illegally. Other legislative proposals and budget deals have expanded workplace protections against raids from U.S. Immigration and Customs Enforcement, and increased legal defense services for immigrants facing deportation and financial aid for students without legal residency.

Senate Bill 54 received national attention as the U.S. Department of Justice pledged to slash government grants for law enforcement from any so-called sanctuary cities, which limit the collaboration between local and federal authorities on immigration enforcement.

“This abandonment of the rule of law by the Legislature continues to put Californians at risk, and undermines national security and law enforcement,” he said.

At the request of the California Senate this year, former U.S. Attorney General Eric H Holder Jr. reviewed the bill and said it passed constitutional muster, adding that the states “have the power over the health and safety of their residents and allocation of state resources.”

In a statement Saturday, McDonnell said the final version of the bill was not perfect, but “reflects much of what the LASD implemented years ago and the work is well underway.”

On Friday, lawmakers said some children without legal status were too afraid to go to school, while police statistics showed a drop in reports of violence as immigrant victims refused to come forward.

Democratic Assemblywoman Cristina Garcia said the era was reminiscent of the 1980s, when her father dreaded immigration raids.

“We are not living in a hypothetical fear,” she said. “That fear is a reality.”