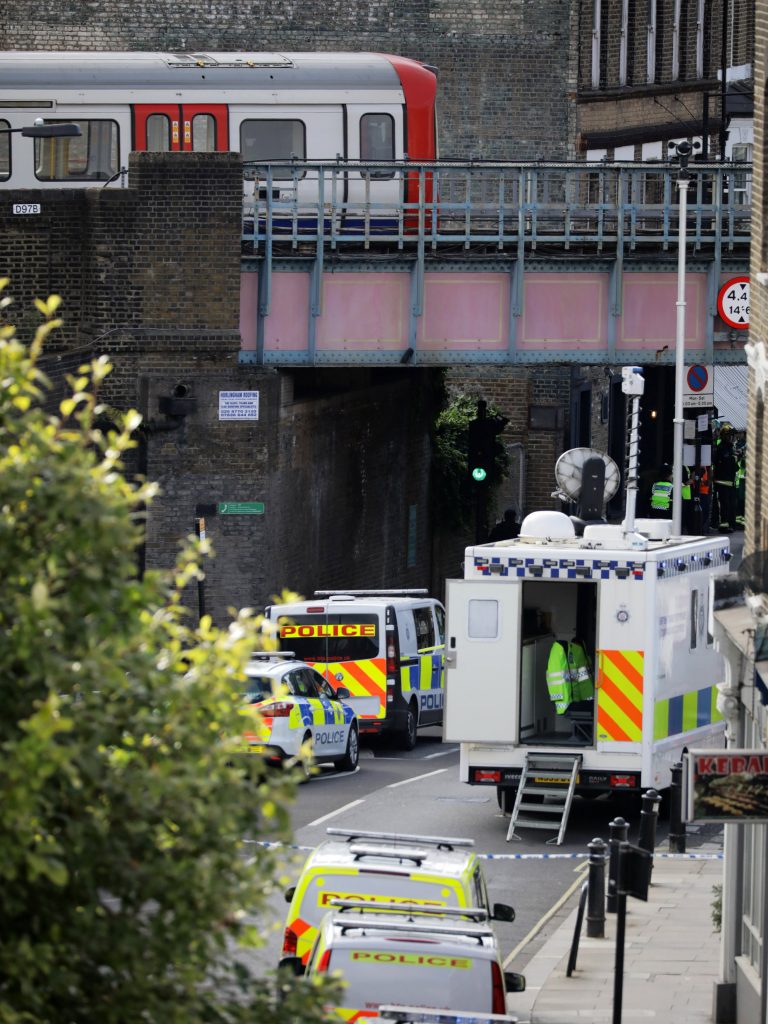 A home-made bomb on a packed rush-hour commuter train in London engulfed a train car in flames and injured 22 people Friday morning, but apparently failed to fully explode.

Passengers heading into the British capital fled in panic after the blast as the train was about to depart Parsons Green underground station in West London.

Some suffered burns and others were injured in a stampede to escape, but health officials said none were thought to be in a serious condition.

“We now assess that this was a detonation of an improvised explosive device,” Britain’s top counter-terrorism officer Mark Rowley told reporters.

Police said a hunt involving hundreds of detectives backed by the intelligence services was underway to find out who was responsible. Rowley declined to say if the suspected bomber had been on the train, saying it was a live investigation.

Britain’s threat level remained on its second-highest rank of severe following the “cowardly attack,” said Prime Minister Theresa May. But she added the threat level would be kept under review.

It was Britain’s fifth major terrorism incident this year.

Pictures taken at the scene showed a slightly-charred white bucket with a supermarket freezer bag on the floor of one train carriage. The bucket, still intact, was in flames and there appeared to be wires coming out of the top.

“I was on second carriage from the back. I just heard a kind of whoosh. I looked up and saw the whole carriage engulfed in flames making its way towards me,” Ola Fayankinnu, who was on the train, told Reuters.

“There were phones, hats, bags all over the place and when I looked back I saw a bag with flames.”

Charlie Craven said he had just gotten on the train when the device exploded.

“Literally within three seconds of putting your bag down, the doors just closing, we hear a loud explosion,” he told Reuters. “I looked around and saw this massive fireball … coming down the carriage.”

He said terrified passengers fled, fearing a second explosion or a gunman, with people being knocked to the ground and crushed in the stampede to escape.

Outside the station, a woman was carried off on a stretcher with her legs covered in a foil blanket while others were led away swathed in bandages. Health officials said 22 were taken to hospital, most suffering from flash burns.

Parsons Green is one of the elevated train stations of what is known as London’s Underground network.

“Another attack in London by a loser terrorist,” U.S. President Donald Trump tweeted. “These are sick and demented people who were in the sights of Scotland Yard. Must be proactive!”

May, who returned to London to chair a meeting of Britain’s emergency response committee, said police and security services were working to track down those responsible.

Asked about Trump’s tweet, she replied: “I never think it’s helpful for anybody to speculate on what is an ongoing investigation.”

Others were more directly critical of Trump. “True or not – and I’m sure he doesn’t know – this is so unhelpful from leader of our ally and intelligence partner,” tweeted Nick Timothy, May’s former chief of staff.

A U.S. law-enforcement official and a U.S. intelligence source, speaking on condition of anonymity, said the attack might well have been carried out in response to recent Islamic State video messages urging would-be terrorists to attack trains and other public transport.

One of the officials said the device “doesn’t look very professionally built” and said its rudimentary design suggested the attack was carried out by someone inspired by Islamic State propaganda rather than by a well-trained cell.

“The flash flame reported suggests that the ‘explosion’ was only partly successful,” he said. “I must speculate that either the mixture was not of the right composition or that the ignition system was inadequate or not properly placed.”

U.K. security services believe that those behind some of the previous terror incidents in Britain this year had probably been acting alone and likely radicalized by online material.