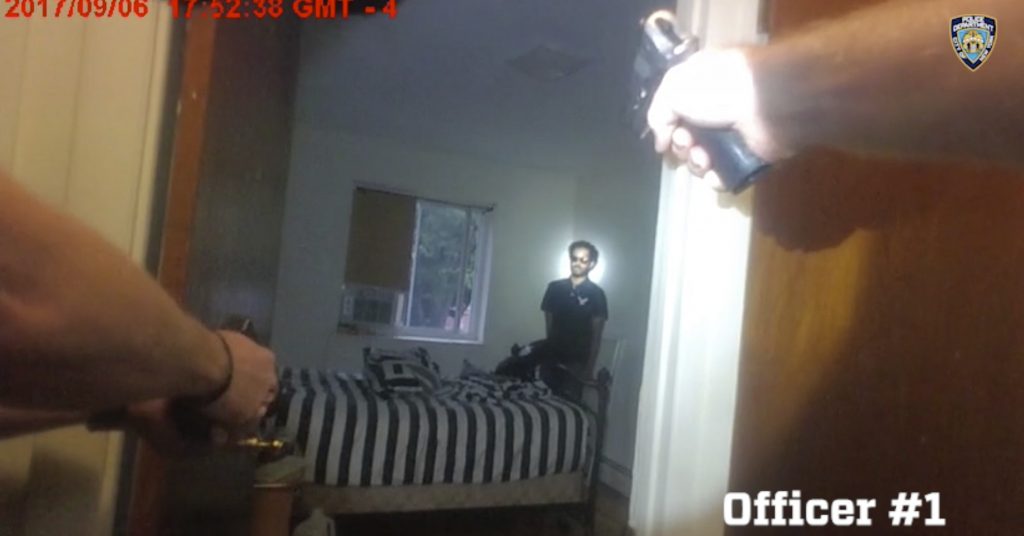 The New York Police Department released bodycam footage on Thursday of a chaotic scene in which officers shot and killed a man with a knife and a fake gun, the first fatal police encounter captured on the devices since officers started wearing them this year.

The video shows the slaying a week ago of 31-year-old Miguel Richards, a college student studying information technology. Officers were called to his Bronx home after his landlord reported he hadn’t seen him for a few days.

The video shows an officer shining a flashlight on Richards as Richards kneels on his bed wearing dark glasses and holding a knife. He never speaks.

About 15 minutes in, the officers notice that Richards has a gun behind his back.

“I don’t want to shoot you if you have a fake gun in your hand. Is that a real gun?” one officer asks. “Drop that gun to the floor. And drop that knife.”

A third officer appears with a stun gun while Richards stands behind his bed. Richards pointed his fake gun with a laser pointer at the officers, who fire both the stun gun and their weapons.

The actual moment he’s struck is obscured by the hands of the officer with the stun gun.

Chief of Department Carlos Gomez said officers asked Richards a total of 50 times to drop the weapons. Richards’ friend, who was called to the scene by the landlord, asked Richards 72 times to put his hands up, Gomez said.

“That’s a lot of warnings by both uniformed officers and a friend at the scene,” Gomez said.

Richards’ father has said he believed officers killed his son in cold blood.

“He did not deserve to die this way,” he told the Daily News of New York.

The footage of the shooting was released publicly over the objection of Bronx District Attorney Darcel Clark, who said she supported the need for transparency but still had an obligation to her investigation into whether the officers involved should face criminal charges.

Gomez said they were releasing the images for transparency reasons. In a note to officers, Police Commissioner James O’Neill said, “We are doing this because the NYPD is committed to being as transparent as possible with respect to the release of body-worn camera video in these critical incidents.”

He said, “In the vast majority of these cases, we believe that body-worn camera video will confirm the tremendous restraint exhibited by our officers.”