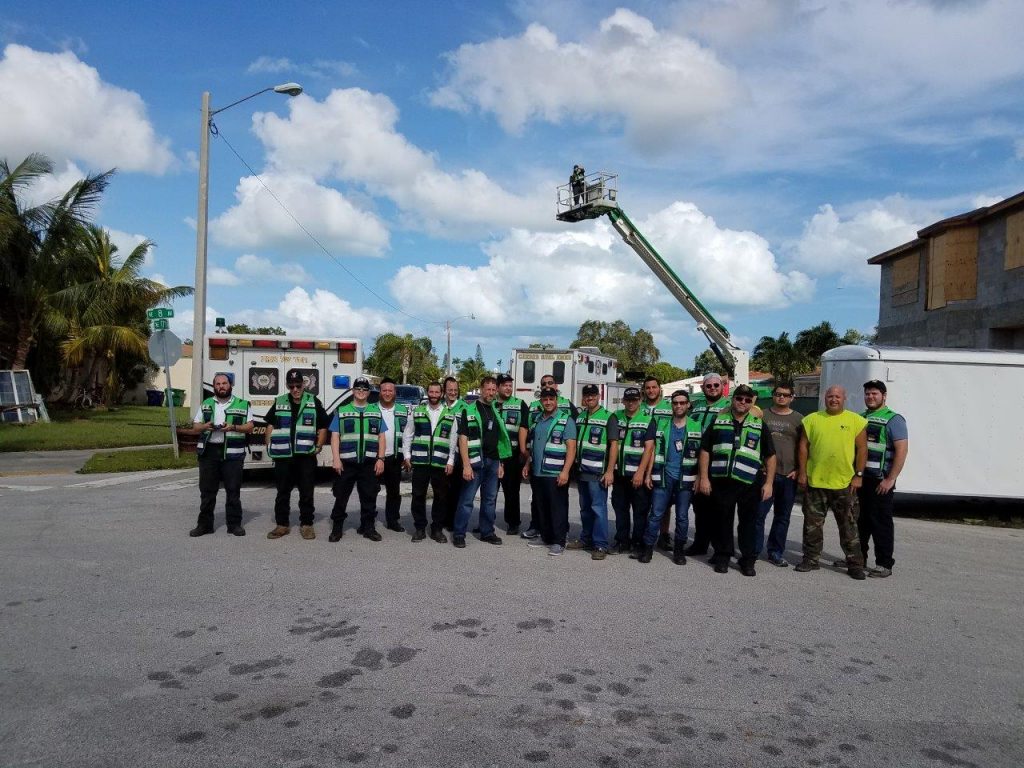 Nearly five days after the southern Florida community was, bechasdei Hashem, spared the worst of Hurricane Irma’s predicted damage, many were still left without electricity in their homes. In Miami’s Jewish community, even as the challenges of life in sweltering temperatures and no power took its toll, a sea of chessed and healthy perspective are giving some the boost that they need.

In advance of the storm, much attention has been paid to the ongoing efforts of communities like Atlanta who mobilized to host the many who fled north, heeding official evacuation warnings. Those who remained behind had their own hachnassas orchim effort as many moved in with relatives and neighbors in more secure locations and houses. Now, as power is gradually being restored, the open doors in the community are only widening, as families who have gotten electricity back, or the few that never lost it, are rolling out the red carpet to those left with dark sweltering homes.

“We’re traveling nomads,” Devorah Wechsler, principal of the junior high school of Bais Yaakov of Miami, told Hamodia. “It’s certainly an inconvenience but, baruch Hashem, it’s nothing compared to the devastation we were afraid of … and we’re very fortunate to have good friends that are taking care of us.”

As of Thursday, much of North Miami Beach, including the Weschlers’ home, was still without power and as well, many in Miami Beach proper. What started earlier in the week as individuals reaching out to friends to invite them to their homes, had blossomed into a coordinated effort to ensure that members of the community, especially those with young children and the elderly have an air conditioned home with working refrigerators to go to.

Hundreds who fled Irma to Atlanta or other locations have gradually returned, but gridlock and other impasses created in the storm’s aftermath have made for grueling travel conditions. For some it took over 24 hours to drive from Atlanta back to Miami, only to find homes intact, but reeling from the effects of days without electricity.

“It was a nightmare for a lot of my friends to get back, and when they did, their houses were 100 degrees with the stench of the food they had frozen for Yom Tov rotting in their freezer,” said Mrs. Wechsler.

With so many left temporarily homeless, many mosdos, shuls, restaurants, and caterers have offered meals to the community. Some kosher supermarkets from as far away as New York and New Jersey have sent trucks with fresh milk and other supplies to help Miamians restock their kitchens.

Hatzalah and several other organizations had banded together to make sure the elderly were attended to and living in safe conditions.

A particular challenge for families has been keeping their young children cool and occupied as most schools have been closed amid power outages and many staff members are still out of town. Several yeshivah high schools had begun to resume sessions on a scaled back basis on Thursday, but most elementary and girls schools were aiming for the coming Monday, when the state says all power should be restored. However, even earlier in the week, many yeshivos organized optional learning programs in homes or batei medrash with electricity.

“People are just looking for an air-conditioned place that they can take their kids to during the day and then try to keep them there for as long as possible,” said Mrs. Wechsler.

In Miami Beach proper, far more residents had their power restored already. Mrs. Malka Lanter’s home still had no electricity, but she and her husband had moved into Tower 41, a large condo with a generator, before the storm and had remained there. The building, with many of its 450 apartments vacant over the summer months has become a well-used refuge for many in the city’s frum community since the storm hit.

“Life is getting back to normal,” Mrs. Lanter told Hamodia. “Around here, most people have power back and today almost all of the stores were open … baruch Hashem, we avoided the calamity that we were all afraid of.”

One North Miami Beach resident, who asked not to be mentioned by name, said that she had stayed in her home powered by a generator that was strong enough to keep a fan and refrigerator running, but not central air conditioning.

“This should be the biggest problem that we have,” she said. “We live in south Florida where hurricanes and blackouts are part of life, but we don’t have snowstorms or trouble parking like in other places, so big deal, we don’t have power for a few days … it’s bringing out tremendous chessed in the community.”

Amid several re-locations, and struggling to keep her family comfortable and occupied, Mrs. Wechsler remained focused on what she felt the community had gained from the challenges.

“This really raised the bar of what we are able to do for each other as a community. People are going so far beyond what they thought their limits were to help others,” she said. “All of the tefillos helped us avoid the worst that we were prepared for, but at the same time, this has given a lot of us a taste of what it means to have a home and what galus really feels like.”