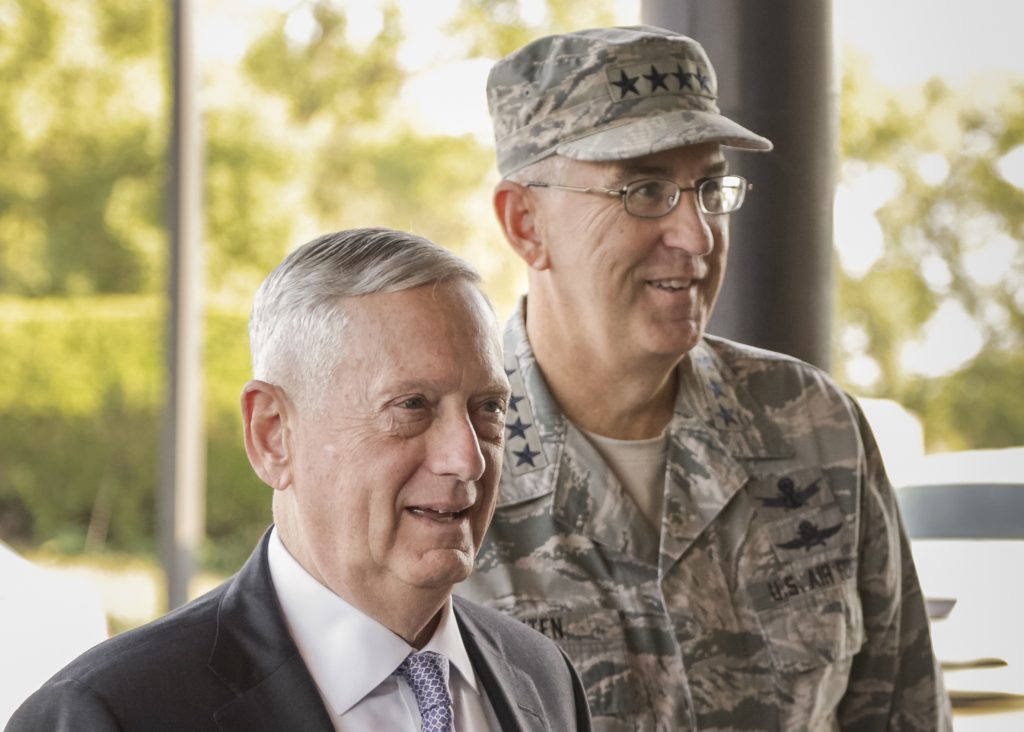 He inspected a mock-up nuclear warhead, but there was no Kim Jong Un lookalike posing for photographs. He chatted with nuclear missile launch officers in their underground command post, but there was no talk of unleashing nuclear hell on North Korea.

A subtle, unspoken message of Defense Secretary Jim Mattis’ visit to this nuclear weapons base Wednesday was that America is a mature nuclear power not intimidated by threats from an upstart North Korean leader who flaunts his emerging nuclear muscle.

Mattis was quietly reminding North Korea that it has no match for a U.S. nuclear arsenal that, while old, is still capable of sudden and swift destruction if Kim were to throw the first nuclear punch.

In his only public comments, Mattis cast his visit as part of an effort to ensure that the U.S. maintains the kind of nuclear firepower that convinces any potential nuclear opponent that attacking would be suicidal.

“You can leave no doubt at all,” he told reporters traveling with him. “Don’t try it. It won’t work. You can’t take us out.”

Mattis was taking such a restrained approach that he barred reporters from his town hall-style exchange with airmen on this base that hosts nuclear-capable B-52 bombers as well as the 91st Missile Wing, which has nearly 150 nuclear-tipped intercontinental ballistic missiles standing ready for launch at a moment’s notice.

On Thursday, Mattis was getting classified briefings at Strategic Command, just outside of Omaha, Nebraska. Air Force Gen. John E. Hyten, the head of Strategic Command, would be in command of nuclear forces in the event that President Donald Trump ordered them into combat.

Mattis said his visits to Minot and Strategic Command are intended to inform his “nuclear posture review,” a top-to-bottom reassessment of U.S. nuclear weapons policy. He said the review is nearly complete but he would not cite a target date. A major question posed in the review is how big the U.S. nuclear force needs to be to remain a deterrent to nuclear war.

Mattis said Wednesday he has become convinced that the United States must keep all three parts of its nuclear force, rather than eliminate one, as he once suggested. In congressional testimony in January 2015, while he was a private citizen, Mattis said eliminating the ground-based component — intercontinental ballistic missiles, or ICBMs — would “reduce the false alarm danger.” He was referring to the argument made by some nuclear policy experts that because ICBMs are postured to be launched on warning of incoming missiles, a false warning might trigger nuclear war.

Mattis has called the submarine-based component “sacrosanct” and has said it is necessary to retain the ability to fire nuclear weapons from planes. Together, those three prongs constitute what the military calls its nuclear triad.

“I’ve questioned the triad,” Mattis told reporters flying with him to Minot Air Force Base, a nuclear base in North Dakota. He said his view has now changed.

“I cannot solve the deterrent problem reducing it from a triad. If I want to send the most compelling message, I have been persuaded that the triad in its framework is the right way to go,” Mattis said.

Mattis has previously indicated this evolution in thinking, but his statements Wednesday were emphatic.

The key to avoiding nuclear war, he said, is maintaining a nuclear arsenal sufficient to convince a potential enemy it could not win a nuclear war with the U.S. and thus should not start one.

“You want the enemy to look at it and say, this is impossible to take out in a first strike, and the (U.S.) retaliation is such that we don’t want to do it,” Mattis said. “That’s how a deterrent works.”

Mattis also said the Trump administration is reviewing the value of the New Start treaty negotiated with Russia by the Obama administration in 2010. The treaty, already in effect, requires reductions by both sides to a maximum of 1,550 strategic nuclear warheads by February.

“We’re still engaged in determining whether it’s a good idea,” Mattis said, adding that the question is linked to adherence by others to separate but related arms treaties. That was an apparent reference to U.S. allegations that Russia is violating the Intermediate-range Nuclear Forces treaty from 1987.

Mattis declined to discuss the matter further, except to say the administration is not considering withdrawing from New Start. It’s an open question whether it will seek to extend the treaty, which expires in February 2021.

Trump has criticized New Start as a bad deal for America.