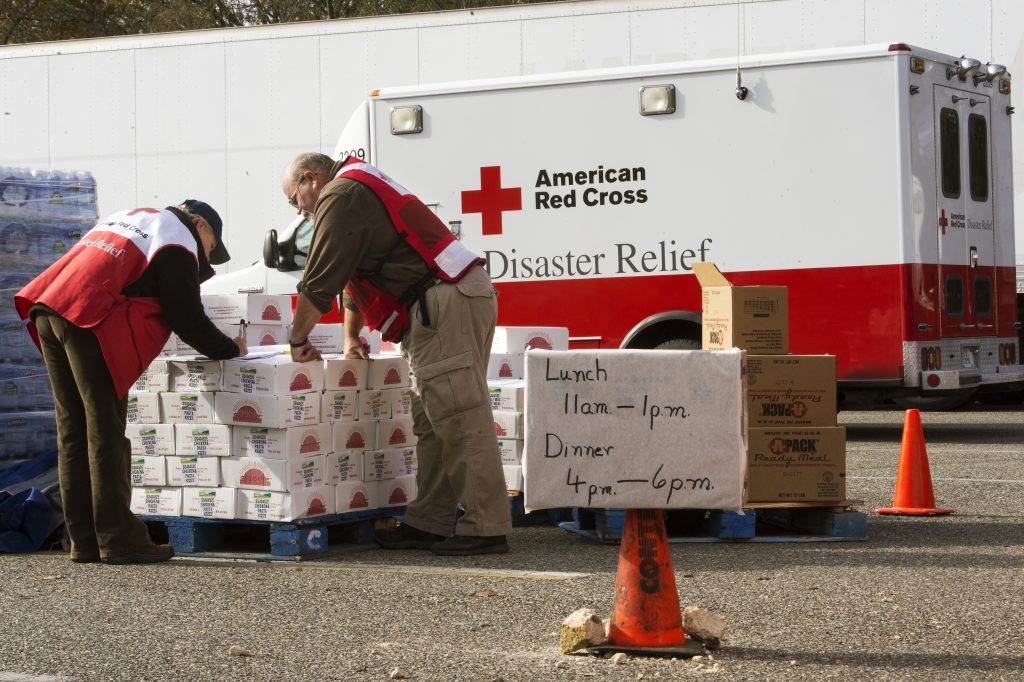 Confronted with back-to-back major hurricanes, the American Red Cross has received a huge outpouring of financial support — and a simultaneous barrage of criticism based on its struggles to respond to several past disasters.

Yet even in the early stages of the response to Harvey in Texas, a NoRedCross hashtag circulated widely on Twitter. Some prominent journalists wrote articles suggesting that people should not donate to the organization. The New York Times, in an editorial, urged prospective donors to be skeptical.

“Its record on large-scale operations is spotty,” said the editorial, asserting that “there has been less accountability than Americans might expect emanating from its grand marble headquarters in Washington.”

The criticism has been stinging to Red Cross volunteers, many of whom have taken to social media to rebut the negative commentary.

“I worry that our volunteers need to feel appreciated,” Red Cross President Gail McGovern said in a telephone interview. “After 12-hour shifts, they come back to their hotel really exhausted. They don’t want to read this stuff.”

Some local officials in Texas and Florida have complained about glitches in the Red Cross response to Harvey and Irma, while others have expressed thanks. But much of the current mistrust of the Red Cross arises from the aftermath of other major disasters over the past 16 years.

After the 2001 terror attacks, the Red Cross irked many donors by earmarking some 9/11 gifts for unrelated purposes, including future needs. It was widely criticized for its response to Hurricane Katrina in 2005, and afterward acknowledged problems that included overwhelmed volunteers, inadequate anti-fraud measures and too few strong partnerships with local charities and civic groups.

More recently, investigative reporting by Pro Publica and National Public Radio made the case that the Red Cross responses to the Haiti earthquake in 2010 and Superstorm Sandy in 2012 were flawed in multiple ways. One key allegation was that the Red Cross failed to adequately document how it was spending the $488 million it raised for its work in Haiti.

Last year, the Red Cross posted a detailed breakdown of its spending in Haiti. But that did not deter some critics from using social media as the new hurricanes arrived to post Haiti-related headlines like this: “How Red Cross Raised Half a Billion Dollars and Built Only Six Homes.”

“People are repeating and retweeting this stuff instead of taking time to research,” said McGovern, a former professor of marketing at Harvard who took over as Red Cross president in 2008 after years of rapid leadership turnover.

McGovern said she took solace in evidence of continued public support — the strong flow of donations and the signing up of about 40,000 new volunteers during the hurricanes. The organization ran scores of emergency shelters in Texas and the Southeast and says it already has provided more than $45 million in financial assistance to more than 100,000 hurricane-stricken households in Texas.

For both Harvey and Irma, the Red Cross is among the hurricane-response groups recommended by Charity Navigator, a watchdog group that rates charities on their finances and transparency. On the Charity Navigator website, several hundred comments about the Red Cross were posted, including visceral exchanges between supporters and critics.

Charity Navigator’s president, Michael Thatcher, says the Red Cross “is under pretty intense scrutiny,” and he hopes the result is improved accountability.

“It’s a hard job to be able to ramp up quickly and deploy volunteer resources and expert resources at the drop of a hat,” he said. “Are they perfect? No. I would love to see them do better, but I definitely want them to hang around.”

Bob Ottenhoff, president and CEO of the Center for Disaster Philanthropy, urged the Red Cross to be as specific as possible in explaining how emergency donations will be spent, both short-term and long-term.

“Part of why the Red Cross got in difficulty is they’re raising money in such large quantities they can’t use it all for the reasons people gave it,” he said.

Another source of concern to some critics is McGovern’s salary of just over $500,000. The Red Cross defends it as being in the normal range for leaders of major national nonprofits.

In the wake of various past controversies, the Government Accountability Office issued a detailed report about the Red Cross in 2015, recommending that Congress establish some sort of federally overseen process for regular, independent evaluations of Red Cross disaster services. The Red Cross contended that existing evaluation mechanisms were adequate, and the GAO’s proposal has not been implemented.

Congress chartered the Red Cross in 1900 to play a central role in responding to domestic and international disasters, though it does not receive federal funding for this purpose on a regular basis.

McGovern says the Red Cross wants to be as transparent as possible about its handling of donations. It’s too early now to outline long-term plans for the Harvey and Irma donations, but that issue will be broached in a one-month-later report, she said.

In Houston, more than 50 groups, local and national, are raising money for recovery from Harvey. The distrust of established organizations like the Red Cross has driven many donors to new initiatives. Notably, Houston Texans star J.J. Watt has raised more than $30 million for his foundation, largely through appeals on his social media accounts.

The Red Cross remains dominant, raising more than $200 million on its own for Harvey relief. About $40 million has gone to a local fund set up by Houston Mayor Sylvester Turner and Harris County’s top official, Judge Ed Emmett. They openly urge donors to forego contributions to the Red Cross.

Emmett blames the Red Cross for problems that arose with setting up and running the emergency shelters used by tens of thousands of people flooded out of their homes.

The major shelter for several days was the George R. Brown Convention Center in downtown Houston. Originally setting a capacity of 5,000 people, the Red Cross ended up with double that number in three days. It ran out of cots. Some people slept on strips of cardboard or the floor until more cots arrived. Others said they were not getting enough food.

David Brady, CEO of the Red Cross for the Texas Gulf Coast region, said the group’s volunteers and staff were doing the best they could during a chaotic and unprecedented storm. Many Red Cross volunteers slept on cots at the shelter themselves.

“There are challenges that we and everyone else faced during the storm,” Brady said. “We always look at how we can serve better.”