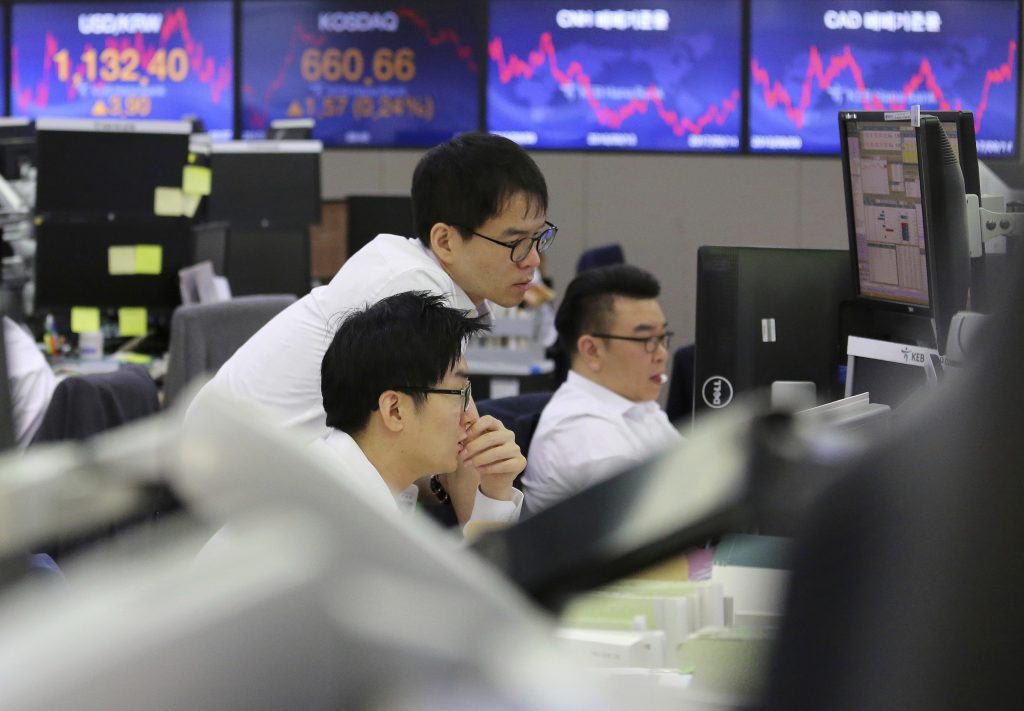 Asian stocks inched down from 10-year highs on Thursday following a burst of Chinese data which was largely weaker than markets expected, while the dollar held steady ahead of U.S. inflation data due later in the day.

China’s fixed-asset investment, factory output and retail sales all grew less than expected, reinforcing views that the world’s second-largest economy is gradually beginning to lose steam in the face of rising borrowing costs.

That took some of the shine off China’s surprisingly robust growth in the first half of the year, which has helped fuel stronger global demand, particularly for commodities, but analysts do not see a risk of a sharp slowdown in its economic momentum.

The Australian dollar, often used as a liquid proxy of China-linked trades, pared gains after the China readings but was still up 0.25 percent at $0.8007 after a much stronger-than-expected jobs report.

MSCI’s broadest index of Asia-Pacific shares outside Japan edged down 0.1 percent after rising to its highest since 2007 the day before. China stocks dipped into the red after the data, giving up modest early gains.

Japan’s Nikkei eased 0.2 percent, while the broader TOPIX briefly brushed a two-year high as the yen weakened. Reaction to reports of North Korean threats to “sink” Japan were so far limited.

Wall Street edged up to a record high on Wednesday, with gains in consumer discretionary and energy stocks helping offset losses in technology heavyweight Apple Inc.

But trading was subdued as traders awaited U.S. consumer inflation data later in the day to see if it will change the perception of subdued inflation and slow credit tightening in the United States.

Expectations that the Federal Reserve will hike rates again in 2017 have waned as price pressures remain stubbornly weak.

The dollar index, measured against a basket of six major currencies, was at 92.472 after touching 92.530 overnight, its highest since Sept. 5.

It had slumped to a 2-½-year low of 91.011 on Friday, when Hurricane Irma threatened the continental United States and on North Korea concerns.

“The dollar would be sold if the CPI turns out to be weak but the main focal point is how the stock market reacts to such an outcome,” said Junichi Ishikawa, senior FX strategist at IG Securities in Tokyo.

“The U.S. financial sector has benefited from the recent rise in yields. Should yields fall on lackluster CPI data, that could be used as a pretext to sell U.S. stocks which have already hit successive record highs.”

The dollar set a one-month high of 110.735 yen before drifting to 110.460. So far this week it has gained 2.5 percent against its Japanese peer, a currency often sought in times of risk aversion.

The pound hit a one-year high of $1.3329 on Wednesday following strong domestic inflation data, with the currency market braced for the closely watched Bank of England (BoE)policy meeting due later on Thursday.

The BoE must decide on Thursday how forcefully to phrase the prospects of a first interest rate rise in a decade when it weighs up the need to help Britain’s Brexit-bound economy against tackling a jump in inflation.

In commodities, crude oil prices dipped slightly after posting a big surge overnight after the International Energy Agency (IEA) said a global surplus of crude was starting to shrink.