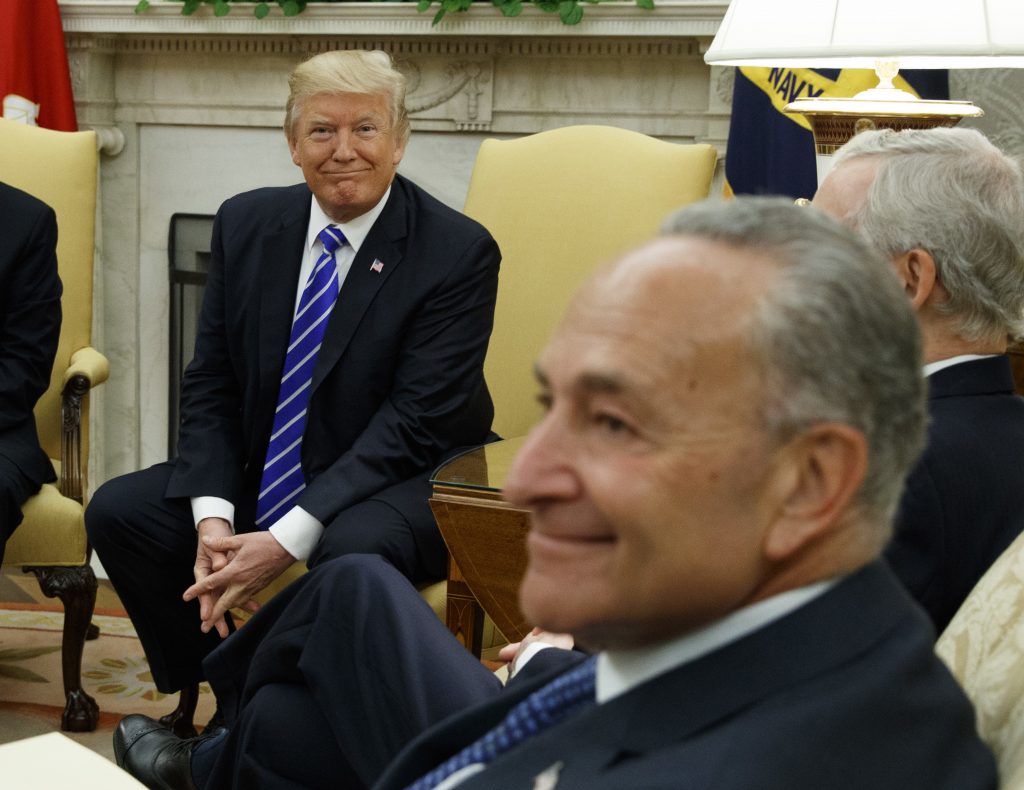 The White House said that Pres. Trump had invited the two Democratic leaders to dinner, more than a week after the president reached an agreement with Schumer and Pelosi — despite objections from Republicans — on a three-month agreement to raise the debt ceiling, keep the government running and speed hurricane relief to states. The president and the congressional leaders are expected to discuss the fall deadlines facing Congress.

Mr. Trump has said he’s simply doing “what the people of the United States want to see. They want to see some dialogue.”

Congressional aides said Schumer and Pelosi were expected to discuss protections for young immigrants and stabilizing the health-care markets. Mr. Trump has fumed at the Republican-led Congress’ inability to repeal and replace former President Barack Obama’s health-care law. He has given Congress six months to come up with a solution before he ends a program that protects from deportation young immigrants living in the country illegally, many of them brought here as children.

The dinner was the latest example of Mr. Trump’s bipartisan push. He had dinner Tuesday night with Republican and Democratic senators to talk about his planned tax overhaul and was meeting later Wednesday with a group of moderate members of Congress from both parties.

Last week, Mr. Trump overruled Republican leaders and his own treasury secretary on the debt ceiling agreement. He also courted Democratic Sen. Heidi Heitkamp of North Dakota with a flight to her home state on Air Force One. And at Pelosi’s request, he later offered reassurances to young immigrants on Twitter that those covered by the Deferred Action for Childhood Arrivals program would “have nothing to worry about” over the next six months.

House Speaker Paul Ryan, R-Wis., said in an interview with The Associated Press that while he wanted a longer-term deal on the debt ceiling, Mr. Trump was in search of a “bipartisan moment” with lawmakers and his approach was “reasonable.”

“It’s only fitting that the president listens to the other party. He didn’t violate a principle. He did what he thought was right for the country at the moment,” Ryan said.