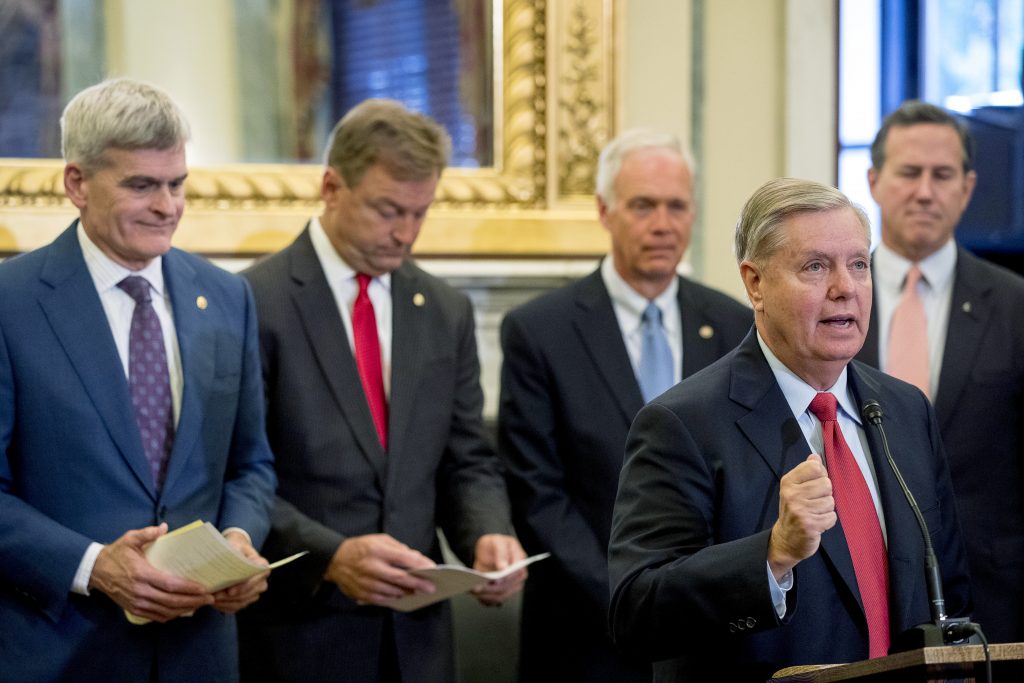 Despite opposition and little time, Sens. Lindsey Graham, R-S.C., and Bill Cassidy, R-La., proposed legislation that would do away with many of the subsidies and mandates of the 2010 law and instead would provide block grants to the states to help individuals pay for health coverage.

“If you believe repealing and replacing Obamacare is a good idea, this is your best and only chance to make it happen because everything else has failed except this approach,” Graham told reporters.

The senators said that some states would get more money to provide health care than they get through the current system. They are modeling their effort after the welfare reform legislation passed under President Bill Clinton in the 1990s. They said states are better equipped than Washington to determine how best to meet the needs of their residents.

They also acknowledged they have an uphill battle to get the bill passed before Oct. 1 when the GOP effort to repeal the law loses its protection against Democratic filibusters.

“To my Republican colleagues, don’t let the health-care debate die. Don’t leave the field with your tail between your legs. Keep fighting,” Graham said.

President Donald Trump lauded the senators’ effort, but it was unclear how much energy the White House was actually putting into the health-care drive with GOP attention shifting to a tax overhaul.

“Inaction is not an option, and I sincerely hope that Senators Graham and Cassidy have found a way to address the Obamacare crisis,” Mr. Trump said.

The White House issued the statement after Graham used the news conference to urge Mr. Trump to “pick up the phone” and round up support from governors.

“Tell them this matters to you, that you weren’t kidding about repealing and replacing Obamacare, that you actually meant it,” Graham said. “So Mr. President, help us because we’re trying to help you.”

Sanders, the Vermont independent who caucuses with Democrats, was unveiling legislation that would allow Americans to get health coverage simply by showing a new government-issued card. Consumers also would no longer owe out-of-pocket expenses like deductibles.

But Sanders’ description of his measure omitted specifics about how much it would cost and final decisions about how he would pay for it.

To cover themselves, several Democrats were introducing their own bills that expand coverage without going as far as Sanders, including possible presidential aspirants Sens. Chris Murphy of Connecticut and Ohio’s Sherrod Brown. Several Democrats facing tough reelections next year in GOP-leaning states say they want to focus on strengthening Obama’s existing law, including Montana’s Jon Tester and Missouri’s Claire McCaskill.

“We welcome the Democrats’ strategy of moving even further left,” said Katie Martin, spokeswoman for the Senate GOP’s campaign organization.

Graham and Cassidy have struggled for weeks to round up sufficient support for their package, although Sens. Ron Johnson, R-Wis., and Dean Heller, R-Nev. signed on. It would cut and reshape Medicaid, disperse money spent under Obama’s law directly to states and erase Obama’s penalties on people who don’t purchase coverage.

No. 3 Senate GOP leader John Thune of South Dakota said Graham and Cassidy would need “a double-double bank shot” to prevail, a joking reference to an impossible basketball shot.

A third effort, a bipartisan attempt to shore up individual insurance markets around the country, is showing early signs that the sides are having problems reaching agreement.

Sens. Lamar Alexander, R-Tenn., and Patty Murray, D-Wash. hope to reach a deal on continuing for at least a year the federal payments to insurers that Mr. Trump has threatened to halt. Republicans are also insisting on easing the Obama law’s coverage requirements, which Democrats oppose.