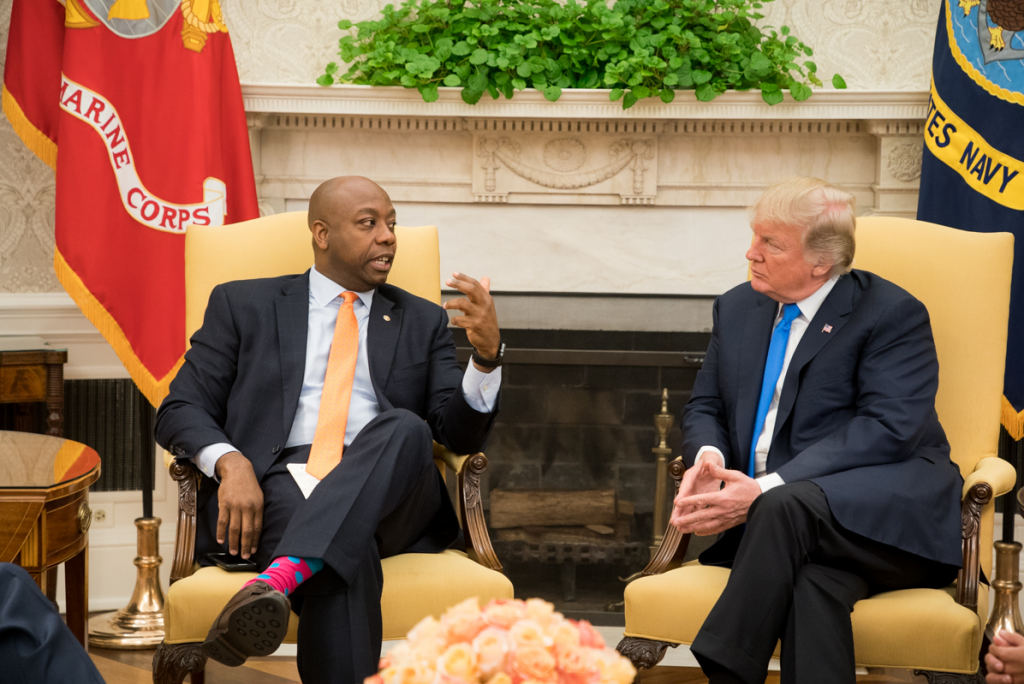 After questioning the president’s “moral authority” in his response to the white supremacist rally in Charlottesville, Va., Sen. Tim Scott thinks President Donald Trump may now understand how he could have handled the episode differently.

Time will tell, however, just how far the South Carolina lawmaker’s message resonated beyond the 40 minutes the Senate’s only black Republican spent with Trump in the Oval Office on Wednesday morning.

When asked directly if the president had changed his mind about his Charlottesville remarks after meeting with Scott, White House press secretary Sarah Huckabee Sanders suggested Trump remained unapologetic.

“The president was clear in his initial statement, that he condemned hatred, bigotry, racism of all forms,” said Sanders, who attended the Oval Office meeting, at her daily press briefing. “He continues to stick to that message. He’s been very consistent in that fact. He and the senator talked about that and discussed that, and agreed that that was the appropriate place to be.”

Scott’s questioning of the president’s moral authority last month came as Trump cited violence from “both sides of the Charlottesville rally, the white supremacists and the counterprotesters.”

Scott did say Trump “tried to explain what he was trying to convey” last month when he bemoaned violence on “many sides, many sides,” rather than pointedly condemn the white supremacists and neo-Nazis who converged on the quaint college town to protest the removal of a Confederate statue. A counterprotester died during the melee and two Virginia state troopers died in a helicopter crash as they aided in the response.

“He simply was trying to convey … that there was an antagonist on the other side,” Scott said of Trump’s criticism of the counterprotesters.

“My response was, while that’s true — if you look at it from a sterile perspective, there was an antagonist on the other side — however, the real picture has nothing to do with who’s on the other side,” Scott continued. “It has to do with the affirmation of hate groups who over three centuries in this country’s history have made it their mission to create upheaval in minority communities as the reason for their existence.”

Scott said that while Trump mostly listened, he expressed an understanding of the point the senator was trying to make.

If there was one concrete outcome from the meeting, it might have been Trump’s agreement to work with Scott to hire additional high-ranking African-Americans in the administration, but Sanders said they did not speak about specific candidates.

“There’s certainly conversations about adding additional personnel that can tap into the African-American community,” she stressed.

Scott said he emphasized to Trump the need to diversify his “echo chamber.” The senator pointed to his own successful efforts to fill his senior staff with men and women of color. One of Scott’s goals for meeting with Trump was also to share his personal narrative of growing up poor and black in a single-parent household in North Charleston, experiences a world away from Trump’s New York City upbringing.

Scott was not the only Republican who criticized Trump’s response to the Charlottesville violence. Sen. Lindsey Graham (R-S.C.) also challenged the president to deliver a more decisive condemnation of the white supremacist instigators. Graham’s demand provoked a Trump Twitter response.

“Publicity seeking Lindsey Graham falsely stated that I said there is moral equivalency between the KKK, neo-Nazis & white supremacists,” Trump tweeted. “Such a disgusting lie. He can’t forget about his election trouncing. The people of South Carolina will remember!”

Graham told McClatchy on Wednesday he had not spoken to Trump about this exchange but said he was glad Trump agreed to discuss the issue with Scott in a civil way.

Congressional Black Caucus Chairman Cedric Richmond (D-La.) also said he was gratified Trump and Scott could sit down together.

“Maybe he’ll hear it better from Tim than he would from the Congressional Black Caucus,” Richmond said. “(Democrats) have not been shy about our disappointment in his words and how we think he has mischaracterized history and then conflated arguments about monuments and other stuff. Maybe Sen. Scott can make some more headway because he’s a Republican.”

Scott, whose response to Trump’s rhetoric around Charlottesville has resonated perhaps more strongly than that of any other elected official, said Wednesday he was ultimately less focused on re-litigating past comments than he was on “improving tomorrow.”

While he and Trump both said they looked forward to continuing a dialogue, Scott scoffed at the notion he might become “the guy who focuses on race as his career.”

“My goal is to focus on those issues that move this country forward,” he went on. “One of the things that I was very clear to do was not to have a racial conversation with the president as if that somehow will solve problems or change minds.

“My goal was to have a conversation about fairness, access to opportunities and remedies that will help people who are impoverished today, people who feel hopeless today,” he continued. “That encompasses black folks and white folks.”

Accordingly, Scott said he took advantage of his audience with Trump and Vice President Mike Pence, along with White House legislative affairs director Marc Short and his deputy, Mary Elizabeth Taylor, to pitch his “Opportunity Agenda,” a slate of bills aimed at improving access to education, work training and apprenticeships.

But his status as one of just three black Republicans currently serving in Congress has made it impossible for the public to ignore Scott’s meeting with Trump.

Scott said he was “very” surprised by the interest his audience with Trump has generated, but said he indicated the extent to which the American people have a hunger to engage on a complicated problem still plaguing the country.