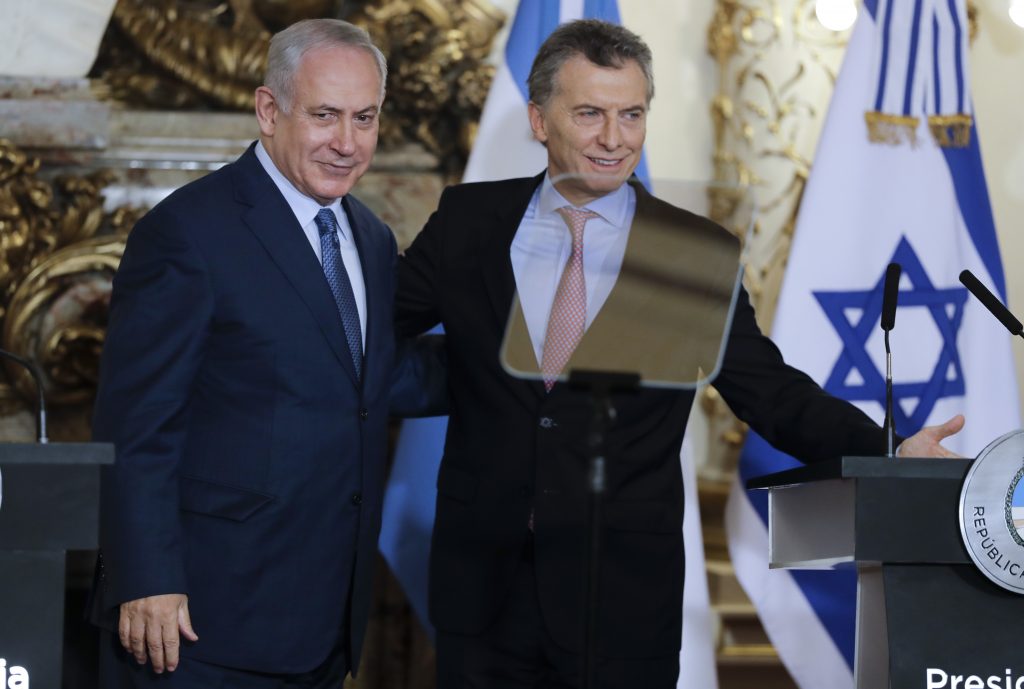 Israeli Prime Minister Binyamin Netanyahu said during his visit to Argentina on Wednesday that he intends to urge President Donald Trump to cancel the Iran nuclear deal, or to freeze or rewrite it, when he meets him in the U.S. next week.

PM Netanyahu said that the deal should contain no expiration date, such as it currently does, and that the U.S. should stipulate in a revised agreement that Iran must dismantle all of its centrifuges. In addition, Iran must agree to desist its sponsorship of terrorism around the world.

“Our position is clear,” said Mr. Netanyahu. “The Iran nuclear deal is bad for the world, bad for the Middle East. It has to be fixed or cancelled. If the Iranians refuse, as expected, it would [be] possible to discuss postponement of the program for 25 years.”

Mr. Netanyahu dismissed as meaningless the clause which restricts the Iranian program for ten years.

Meanwhile, the Israeli prime minister addressed a special economic event attended by Argentinian businesspeople and an Israeli business delegation that joined his trip, on Tuesday night in Buenos Aires.

“This is the first time ever that an Israeli Prime Minister comes to Argentina as Prime Minister or comes to any country south of the United States, which is actually astounding when you think of it, so obviously it’s a new age in our relations with the world, our relations with Latin America, and not by accident I chose to begin it here at the kind invitation of my friend Mauricio Macri. He is transforming Argentina and I think we are transforming together the friendship between our countries.

“The future belongs to those who innovate. Israel is an innovation nation. The power of innovation is endless. New industries are created from thin air literally. They create wealth very rapidly. If you look to the ten leading companies in the world in terms of market capitalization ten years ago, five were energy companies, one, only one was IT-Microsoft. Ten years later one energy company is left, Exxon, in this list. It went from number one to number five, and five are IT companies. The power of the mind is the new wealth. The combination of big data, connectivity and artificial intelligence creates industries never heard of. This is a transformation that will change virtually every field of human endeavor. The distinction between high- tech and low-tech is rapidly disappearing in everything, in sewage, water, milk, I just counted three liquids, but in anything, in agriculture, in transportation, in health, everything.

“Everything is changing very, very rapidly. The future belongs to those who innovate, and therefore this meeting, this event today marks this change in our ability to cooperate, so I want to make it clear that we welcome all Argentinian companies to come to Israel with the Deputy President and subsequently later on in the second half of the year with the President and all Israeli companies to come to Argentina and share the ability to produce value.

“I think this is evident for anyone dealing in business; it’s not evident for anyone dealing with governments. Governments typically do not think that wealth is created by private sector. They think that wealth is created by governments. But it’s not, it’s just spent by governments. To create value you need entrepreneurs and to create entrepreneurs you need freedom. Freedom, freedom from bureaucracy, freedom from overregulation, freedom from excessive taxes. This is an important message that I don’t need to bring to the President of Argentina because he understands it perfectly.

“In Israel this means that we create new industries from scratch. Once you have that environment, I’ll give you an example, Israel produces more milk per cow than any other cow in the world. You think it would be a French cow, Dutch cow, an American cow? No. It’s an Israeli cow, because it’s a computerized cow, every moo is computerized. We recycle 87% of our wastewater. The next country to recycle, the second country in the world, is Spain with 17%.

“We have 20% of the world’s global investment in private cybersecurity, 20%. Since we are 1/10 of 1% of the world population, this means we’re punching 200 times above our weight. It’s as if Israel were a country of 1.6 billion people. It’s not. We have a car industry today. We never had one but we have now. A car industry. You use Waze? Yeah? OK. Waze is an Israeli company. It was sold to Google for a mere $1 billion. Very stupid deal. It’s worth a lot more. But now, now we have a company in Jerusalem that was sold to Intel for $15 billion for autonomous vehicles, and we have 500 tech startup companies that receive each year $3.5 billion regular investment for automotive technology because transportation is changing. Transportation is changing, 85% of the value of the car within ten years will be in software. Not in the body, not in the chassis, not in the wheels, not in the engine – but in the software. Cars are moving platforms for software. And so we’re moving into that. And I could tell you on this, as opposed to cyber, we had nothing to do with it. We didn’t do anything! It happened by itself. By itself! If you create the right business environment. And the same thing is happening everywhere.

“When you have drones looking at fields and you have agriculture that is suited to the plant. The plant! Not the field, the plant! You can actually water and fertilize up to the level of the individual plants and reduce your … cost, to produce crops, and enormously increase productivity. And so on, and so on and so on. You can make your agriculture more productive, your air cleaner, your water more efficient and cleaner, everything, your health. We are now engaging in a digital health project in Israel. We have 98% of the population in a computerized record that every person has with a little card, and they know what their medical record is for the last 20 years. This is an enormous, enormous big data possibility. We are now going to take 100,000 of these people and we’re going to give them a genetic test, you know, a swap. And then we’re going to take 2,000 of these people and we’re going to put censors on them to monitor their physical activity. So we now have a database of the entire population going down to medical records, going down to genetic composition, going down to physical performance. I don’t know what this will yield, but I think, practically speaking, that this can produce both preventive medicine and personalized medicine and many, many, many companies that will develop from this.

“I think that we should have a partnership in seizing the future. This is what I came to Argentina for and this is what I leave Argentina with: President Macri and I decided to join hands and deliver to our peoples the future they deserve.”