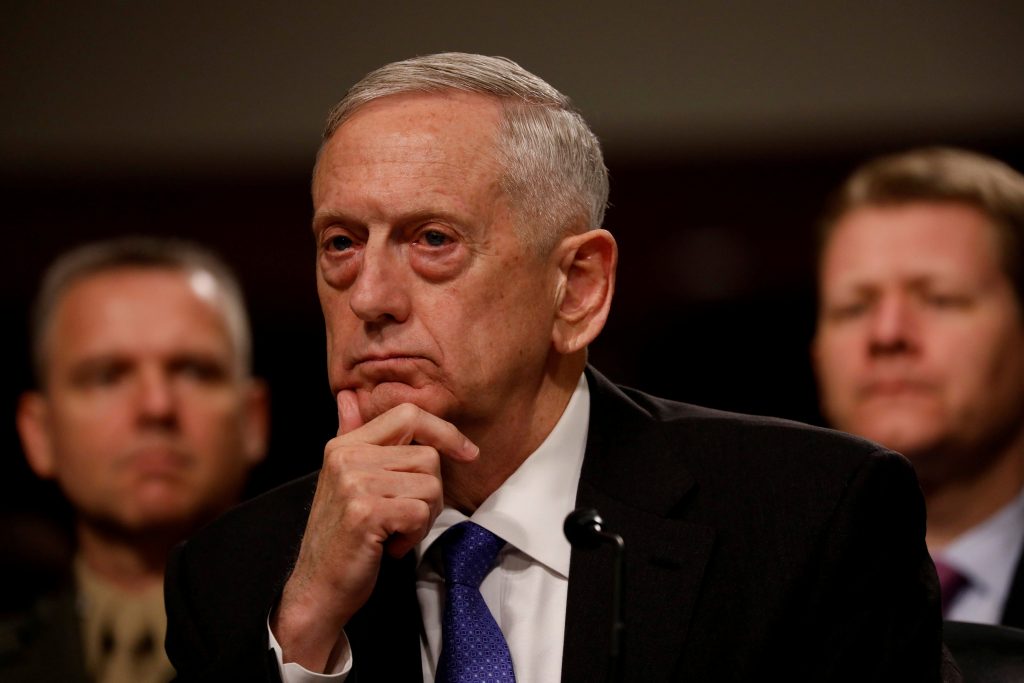 On Wednesday he is dropping in on ground zero of American nuclear firepower: Minot Air Force base in North Dakota, home to more than 100 land-based nuclear missiles as well as nuclear bomb-toting aircraft. He also will receive briefings at Strategic Command, whose top officer would command nuclear forces in war.

The visits were scheduled before a recent series of North Korean nuclear and missile tests, but they give Mattis a chance to highlight what the Air Force touts as an always-ready fleet of land-based missiles and B-52 bombers equipped to deliver nuclear devastation to nearly any point on the globe in short order.

Minot and Strategic Command headquarters at Offutt Air Force Base in Nebraska also are timely backdrops for a related political message: The Trump administration intends to press ahead with a multi-billion-dollar modernization of the entire nuclear arsenal. The Pentagon is in the midst of an in-depth review of nuclear weapons policy, but it seems already clear that upgrading the Cold War-era nuclear force is a foregone conclusion.

Last month the Pentagon signaled its intentions by awarding two key contracts. One was to Northrop Grumman and Boeing, totaling nearly $700 million, for further development of an intercontinental ballistic missile, or ICBM, to replace the Minuteman 3. The other was to Lockheed Martin and Raytheon for $1.8 billion to work on a new nuclear-armed, air-launched cruise missile. The Air Force also is proceeding with development of a next-generation nuclear-capable bomber, dubbed the B-21 Raider, and the Navy is building a new fleet of strategic nuclear submarines.

How this fits into the broader defense budget in coming years is unclear. Kingston Reif, a nuclear policy specialist at the Arms Control Association, says his analysis of budget figures suggests that the total cost over 30 years could approach $1.5 trillion, when adjusting for inflation.

“The current approach exceeds what is necessary for deterrence and assumes that the United States will maintain a nuclear arsenal like the one it has now for decades to come,” Reif said, noting the Obama administration had determined that the nuclear arsenal could be cut further without sacrificing security.

Air Force Secretary Heather Wilson said in an Associated Press interview on Monday that there is no practical alternative to modernizing the force.

“At some point, stuff just breaks,” she said, referring to the Minuteman 3, which was first deployed in 1970. “The materials just are not able to be maintained anymore.”

Mattis in recent weeks has all but dismissed the idea — he himself raised it in congressional testimony two years ago — that the country might be better off eliminating the ICBM fleet. In June, the Air Force finished reducing the number of Minuteman 3 missiles by 50 to a total of 400, the lowest since 1962. But Mattis appears to have been persuaded by the argument that keeping ICBMs deployed in underground silos sprinkled across the western Great Plains is key to deterrence because an attacker would have to use hundreds of weapons to destroy all 400 launch facilities.

“It’s going to soak up a lot” of an enemy’s arsenal, he said last month, referring to the Minuteman launch sites in North Dakota, Montana, Wyoming, Colorado and Nebraska. Because these are fixed sites known to an adversary, they are easily targeted, although perhaps not easily destroyed.

Minot hosts the 91st Missile Wing, which operates one-third of the nation’s 400 Minuteman 3 missiles, as well as the 5th Bomb Wing, which flies nuclear-capable B-52 bombers.

Minot in recent years was at the center of trouble in the ICBM force, including lapses in morale, training, performance and management. The Air Force has made an effort since 2014 to correct those weaknesses, which had accumulated over a period of years, with little attention from Congress.

Mattis himself has been something of a nuclear skeptic. Pentagon leaders usually are cheerleaders for the nuclear establishment, in part because it has been at the heart of U.S. security strategy for many decades and in part because it is politically unpopular to question the way that establishment manages the nuclear force. In his 41-year Marine Corps career, which ended in 2013, Mattis was never closely involved in nuclear strategy, but he has said that during his post-military stint as a visiting fellow at Stanford University’s Hoover Institution he gave nuclear policy a lot of thought.

On a visit last month to Naval Base Kitsap at Bangor, Washington, which is home to Pacific-based Trident nuclear submarines, Mattis repeated the familiar assertion that the Pentagon’s No. 1 priority is to maintain a nuclear force sufficient to ensure that the weapons are never needed in combat, adding darkly, “If they are, that fight is over with very, very quickly, as we try to restore some kind of health to this planet.”