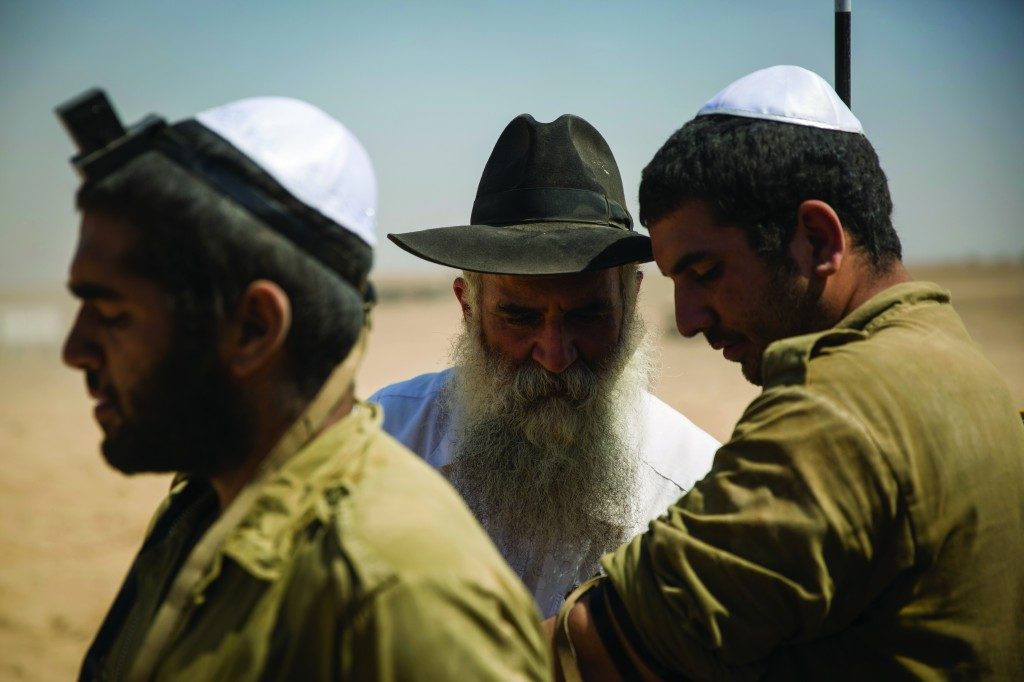 Shock and disbelief. That is the only possible reaction to the news report last Friday that a Chabad shaliach in Herzliya, Israel, was ticketed and fined NIS 730 ($200) for offering passersby the opportunity to put on tefillin.

According to witnesses, the shaliach was approached by two city inspectors demanding that he shut down his tefillin stand. When he refused, he was fined for “creating a public obstacle.” The ticket said that the Chabad Chassid “was bothering passersby by asking them to put on tefillin.”

How can one Jew offering another the chance to do a mitzvah be construed as a public obstacle? How can it be that Chabad has set up tefillin stands in New York, London, the Red Square in Moscow, and the Eiffel Tower in Paris without interference from local officials, but in Israel, two weeks before Rosh Hashanah, city inspectors have the chutzpah to fine a Jew sitting in the sun all day for the chance to offer a fellow Jew a mitzvah?

As MK Bezalel Smotrich, of the Jewish Home, put it, such behavior is “unacceptable in a Jewish state.”

But such unacceptable behavior isn’t limited to Herzliya. In Sderot, the gabbai of a shul was fined for activating a Shabbos siren to make residents aware of candle-lighting time. “The noise was heard from far away, and included Shabbos songs,” the outraged city inspector wrote in his report. “This noise caused a disturbance.”

How ironic that a city like Sderot, which lived for years with sirens warning of incoming rockets, now has the audacity to complain about sirens that welcome in the Shabbos and refer to Shabbos songs as a “disturbance.”

The gabbai turned to Shas MK Michael Malkieli, who spoke to a member of the Sderot Municipal Council and the head of the city’s Planning and Building Committee, requesting that they cancel the fine.

“It is unreal that in Israel, in 2017, we are seeing fines given for Shabbos sirens,” said Malkieli, who also wrote to the mayor of Herzliya over the tefillin debacle. In both cases, the public pressure worked and the fines were canceled.

Moreover, in Herzliya, the mayor, Moshe Fedlon, went out of his way to state that he had nothing against Chabad, promised to work with shluchim to “set up official sites throughout the city where they can offer to help people put on tefillin,” and had himself photographed putting on tefillin with the assistance of a Chabad shaliach.

But the fact that inspectors in the state of Israel can relate to tefillin as an “obstacle,” and Shabbos songs as a “disturbance,” must serve as a warning light. It is yet another painful reminder how far the government, Knesset, courts and educational system of Israel, a country that identifies itself a Jewish state, has distanced itself from Torah life. While they may seek to cloak this attitude in the guise of promoting democracy, what it really is all about is a heartbreaking disconnect from our glorious heritage.

The irony is that on this issue the people are way ahead of their government. A poll released just recently, shows that a large majority favors moving soccer games to weekdays so that both players and fans can have Shabbos.

And while a tiny, but influential minority rails about any attempt to introduce Yiddishkeit in the secular public schools as “religious coercion,” they are rejected by the silent majority which is grateful for any opportunity to expose their children to their heritage, at whatever level.

There are also signs that this extremist minority is beginning to fall out of favor with the High Court. In a most welcome development, the court decided on Monday to stay out of a petition filed by the Reform, to force the government to run buses on Shabbos on the scurrilous grounds that it’s a matter of pikuach nefesh (people need to get to the hospital).

The government, in responding to the Reform, pointed to the status quo and noted that the transportation minister is “required to act in a manner that takes into consideration Jewish tradition on transportation on Shabbos.”

These kinds of decisions have an impact on the overall climate. More decisions that “take into account Jewish tradition” will filter down to city inspectors in Herzliya and Sderot and help them understand that the last thing you could call a tefillin stand is a “public obstacle,” and that Shabbos songs are a salve for the soul, not a “disturbance.”

It is to be hoped that the special atmosphere of the coming Yamim Tovim — Rosh Hashanah, Yom Kippur and Sukkos — will help awaken the pintele Yid in all the Jews of Israel.

One thing is for sure. Chabad won’t be dissuaded from its noble mission by a few tickets or fines. “For 50 years we have been sponsoring these stations and they have become an inseparable part of the Israeli landscape,” said one representative. “We will continue our practice and act as a bridge between the different parts of the nation.”