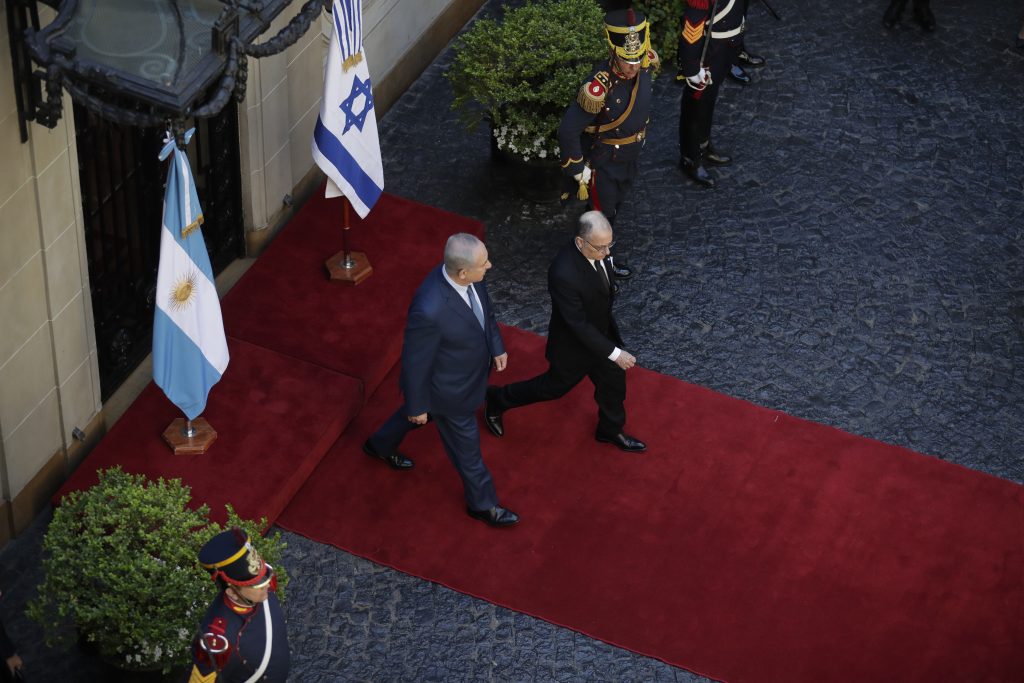 During a press conference with his Argentine counterpart President Mauricio Macri, Israeli Prime Minister Binyamin Netanyahu on Tuesday pressed for a revision or revocation of the Iran nuclear deal.

“In the case of Iran, there have been some news stories about Israel’s purported position on the nuclear deal with Iran. So let me take this opportunity and clarify: Our position is straightforward. This is a bad deal. Either fix it — or cancel it. This is Israel’s position,” Netanyahu said.

Netanyahu’s comment came after Reuters had reported earlier on Tuesday that U.S. officials familiar with discussions about the deal, known as the Joint Comprehensive Plan of Action (JCPOA), said Israel and Saudi Arabia would like to see the pact remaining as it is.

Before Netanyahu’s speech, Miri Ben-Zeev, whose husband, Eli, Hy”d, was a security guard murdered in the embassy attack, recalled the day when her husband was killed in “the Paris of South America.” Four Foreign Ministry employees were killed in the attack, and the representatives of the families of three of them were invited to the ceremony and accompanied the prime minister on his flight from Israel.

The prime minister, who was received by Argentinian officials with great friendliness, made the following remarks at a wreath-laying ceremony at Embassy Square in Buenos Aires:

”First of all, I am grateful for this ceremony. I know that it expresses President Macri’s commitment to fighting terrorism, fighting anti-Semitism, remembering the lessons of the past and doing everything in his power to prevent a recurrence of such tragedies.

”Twenty-five years ago, we all united as one big family in the face of destruction and horror. I assume we all remember where we were at that moment. I remember the terrible impression left by the atrocities, carried out by savage terrorists. This act broke our hearts, in Argentina and in Israel, and in other places around the world. It was a moment of profound shared fate, of mutual solidarity in pain and tears. We will never forget the 29 lost souls, the 29 victims of the attack: men and women, Jews and non-Jews, Argentinians and Israelis.

”As the son of a bereaved family for 41 years, I say to you, the families here and those who came with me from Israel: We are family. Your pain is my pain, and I know that the wound never heals. The scar remains, but we have the ability to support each other and ease the journey of grief as much as possible. I wish to express my condolences to every family who lost a loved one, and I wish a full recovery to the wounded.

”Distinguished guests, alongside the memory and the grief, there is also a lesson. The terrorist attack at the Israeli embassy in Buenos Aires, much like the attack on the AMIA building two years later, taught us that we must not be deterred in any way from the ongoing struggle against extremist murderers. We must stand firmly, forcefully, determinedly, against the perpetrators, supporters and distributors of terrorism.

”Global terrorism has two main foci: The terror of radical Shiite Islam led by Iran, and the terrorism of radical Sunni Islam, first under the leadership of al-Qaida and now under the leadership of Islamic State. Iran was behind the major terrorist attacks in Buenos Aires in the 1990s, all the way from the Middle East, along with its proxy, Hezbollah. They continue to extend their tentacles all over of the world, even here to Latin America. We are determined to fight Iran’s terrorism; we are determined to prevent it from establishing itself along our border. We are also determined to fight the second group that spreads global terrorism around the world — Islamic State.

“We are helping all the countries that fight against them. Indeed, many have joined this war, and there have been some achievements, but there is also a problem. It turns out that the more successful the campaign against Islamic State is, it creates an equally serious problem: Islamic State is defeated — Iran enters. Islamic State surrenders — Iran takes over. It is incumbent on all civilized countries to fight terrorism in general, and Iran’s terrorist attacks in particular — the same Iran that committed these two horrifying crimes.

”On this day, September 11, we stand at attention with our brothers and sisters in the United States as well. We stand at attention in memory of the thousands of victims who were murdered in the terrible terrorist attack on the World Trade Center, Washington and Pennsylvania.

”Buenos Aires, New York, Jerusalem, Paris, Barcelona and Brussels — no country is immune to radical Islamist terrorism, and since this threat is shared, the solution must be shared as well. We must face it together, without fear, without hesitation. I believe that if we do this, the victory of civilized people over the representatives of barbarism will be assured. Progress will defeat the Middle Ages. Progress will subdue terrorism, which in essence harms innocent people. But even in the Middle Ages, no one did what Iran has done. Although in ancient times innocent people were harmed, ambassadors were never harmed, and if they were, it was considered an unusual crime. Even in times of barbarism, they avoided hurting ambassadors, but Iran did strike the embassy and created a new standard that we cannot accept.

”Whoever hurts us, we hurt them — legally, civilly, humanely — but terrorism only wins if we do not fight it. Let us fight it, because all of our futures are at stake. We will forever cherish the memory of the victims of the attack, and we pledge ourselves in their name to eradicate terrorism, and bring life and hope for progress and peace for all humankind.”

At the AMIA Building in Buenos Aires, Netanyahu addressed the heads of the Jewish community:

”My wife and I have come from Jerusalem, the beating heart of the Jewish people for 3,000 years. We came to this building, which is the heart of the Jewish community of Buenos Aires. Therefore, before anything else, this is a heart-to-heart meeting. The longstanding Argentine Jewish community is a warm and kind community, which continues to cultivate its Jewish identity, invest in Jewish education and strengthen its ties to the state of Israel. We appreciate you, we love you and we thank you for the warm reception. Thank you, all.

”Yet this visit has another dimension, one related to the events that occurred here 23 years ago. We will never forget what happened here. Two years after the horrific bombing of the Israeli Embassy in Buenos Aires in 1992, where we just came from, terrorism struck again in the capital of Argentina, this time – even harsher. We all shared the shock and pain, even if thousands of miles separated us. Our hearts were broken. We saw the terrible sights; we heard about the wounded and the slain, and we wept. We received the reports and felt a deep sense of shared destiny. I can say this personally because I am familiar with anguish and bereavement, and I know what it is like to lose loved ones to the war on terror and in terrorist attacks.

”Recognizing the magnitude of loss, my wife and I, together with the entire delegation, share in the grief of the families whose loved ones were murdered in the AMIA Building. I hope that the scar that you live with has somewhat healed over the years, and does not stop you from enjoying happy occasions and discovering new avenues for hope.

”Since the tragedy that befell you, befell us all, much has changed in the world when it comes to understanding terrorism. There is no country in the whole world today that is immune to terrorism. Not even the countries that instigate it. Everyone suffers from this scourge, but there are those who consciously spread it, systematically and with a cruelty that knows no bounds. What has not changed is the source of the terrorism that attacked this place.

”Iran still instigates terrorism all over the globe as it did two-and-a half decades ago. It was Iran that lit the fuse of the bomb that struck Argentina twice. Iran initiated, planned and carried out these horrible attacks through its proxy, Hezbollah. I thank President Macri and the authorities in Argentina for their willingness to exhaust the investigation into the truth. The time has come to publicly place full responsibility on those responsible and condemn them once and for all. The time has come to deliver justice to the victims.

”My friends, the Iranian threat is an ongoing challenge; it erupts from the Middle East and sends tentacles in each and every direction, including here, to Latin America, and it does so all the more forcefully in recent years.

”Israel has spearheaded the fight against global terrorism, and we will continue to act decisively and in various ways to defend ourselves against Iranian aggression and terrorism, and terrorism at large. We will do so together with our partners here in South America – Argentina – and of course, in North America.

”With us here today is a representative from the American Embassy, and on this day we also bow our heads in memory of our brothers and sisters who lost their lives in the dreadful attack on the Twin Towers and other places in the U.S.

”Twenty three years ago, brutal murderers were sent to blow up the AMIA building, rendering it a pile of dust and rubble. Today, it stands again, taller and stronger, symbolizing the triumph of good over evil. This is also true for the state of Israel. When you visit Israel, you can see the great development. You see Israel rising as a global power in technology, cyber, agriculture, water, in every field. Israel is becoming a force to be reckoned with on the global stage.

”My visit here reflects this change. It reflects the fact that we have friends on all continents, and their number is increasing. The number of our friends that realize that we share both a future and a threat, and that we must work hand in hand, is growing. Undoubtedly, one of our great friends is the President of Argentina, Macri, and for that reason, I decided to begin my visit to South America here, in Buenos Aires.

”Thank you all and Shanah Tovah.”