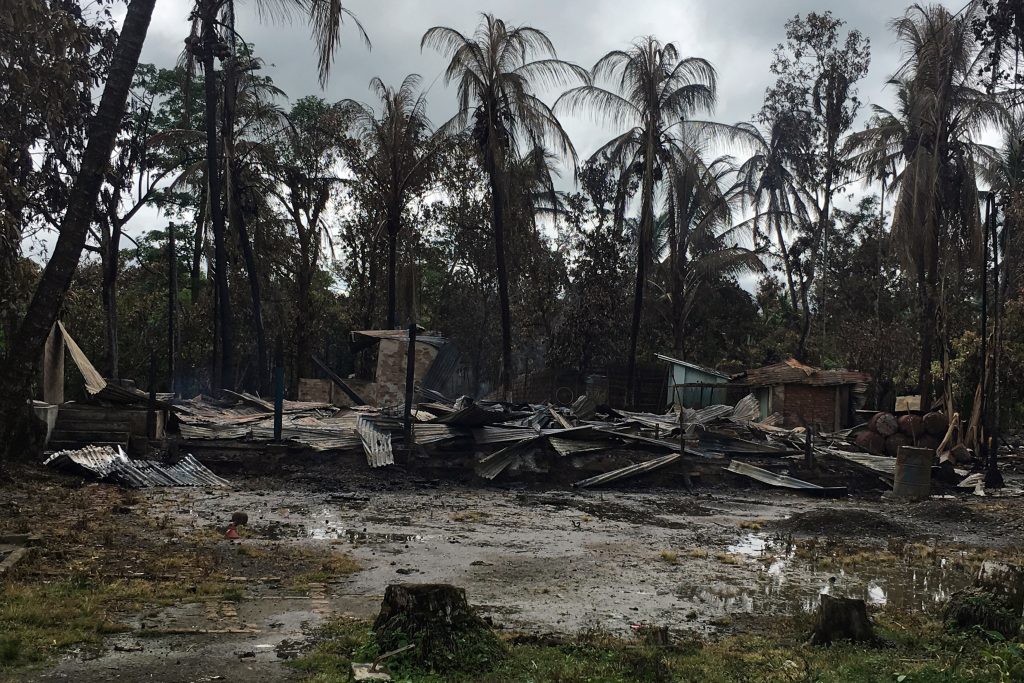 Pressure mounted on Myanmar on Tuesday to end violence that has sent about 370,000 Rohingya Muslims fleeing to Bangladesh, with the United States calling for protection of civilians and Bangladesh urging safe zones to enable refugees to go home.

But China, which competes for influence in its southern neighbor with the United States, said it backed Myanmar’s efforts to safeguard “development and stability”.

The government of Buddhist-majority Myanmar says its security forces are fighting Rohingya terrorists behind a surge of violence in Rakhine state that began on Aug. 25, and they are doing all they can to avoid harming civilians.

The government says about 400 people have been killed in the fighting, the latest in the western state.

The top U.N. human rights official denounced Myanmar on Monday for conducting a “cruel military operation” against Rohingya, branding it “a textbook example of ethnic cleansing”.

The United States said the violent displacement of the Rohingya showed Myanmar’s security forces were not protecting civilians. Washington has been a staunch supporter of Myanmar’s transition from decades of harsh military rule that is being led by Nobel peace laureate Aung San Suu Kyi.

“We call on Burmese security authorities to respect the rule of law, stop the violence, and end the displacement of civilians from all communities,” the White House said in a statement.

Myanmar government spokesmen were not immediately available for comment but the foreign ministry said shortly before the U.S. statement was issued that Myanmar was also concerned about the suffering. Its forces were carrying out their legitimate duty to restore order in response to acts of terrorism.

“The government of Myanmar fully shares the concern of the international community regarding the displacement and suffering of all communities affected by the latest escalation of violence ignited by the acts of terrorism,” the ministry said in a statement.

Myanmar’s government regards Rohingya as illegal migrants from Bangladesh and denies them citizenship, even though many Rohingya families have lived there for generations.

Attacks by a Rohingya terrorist group, the Arakan Rohingya Salvation Army (ARSA), on police posts and an army base in the north of Rakhine on Aug. 25, provoked the military counter-offensive that refugees say is aimed at pushing Rohingya out of the country.

A similar but smaller wave of attacks by the same insurgents last October also sparked what critics called a heavy-handed response by the security forces that sent 87,000 Rohingya fleeing to Bangladesh.

Reports from refugees and rights groups paint a picture of widespread attacks on Rohingya villages in the north of Rakhine by the security forces and ethnic Rakhine Buddhists, who have put numerous Muslim villages to the torch.

But Myanmar authorities have denied that the security forces, or Buddhist civilians, have been setting the fires, instead blaming the insurgents. Nearly 30,000 Buddhist villagers have also been displaced, they say.

The U.N. Security Council is to meet on Wednesday behind closed doors for the second time during the crisis since Aug. 25. British U.N. Ambassador Matthew Rycroft said he hoped there would be a public statement agreed by the council on the crisis.

“It is important that the Security Council plays its role in responding,” said Sweden’s U.N. Ambassador Olof Skoog on Tuesday. Britain and Sweden requested the meeting.

However, rights groups slammed the 15-member council for not holding a public meeting. Diplomats have said China and Russia would likely object to such a move and protect Myanmar if there were any push for council action to try and end the crisis.

“This is ethnic cleansing on a large scale it seems, and the Security Council can’t open its doors and stand in front of the cameras? It’s appalling, frankly,” Human Rights Watch U.N. director Louis Charbonneau told reporters on Tuesday.

Sherine Tadros, head of Amnesty International in New York, said if the council doesn’t act, “the price is being paid.”

“The danger is without some sort of public proclamation by Security Council members … the message that you’re sending to the Myanmar government is deadly, and they will continue to do it,” Tadros told reporters.

The exodus to Bangladesh shows no sign of slowing with 370,000 the latest estimate, according to a U.N. refugee agency spokeswoman, up from an estimate of 313,000 on the weekend.

Bangladesh was already home to about 400,000 Rohingyans.

Many refugees are hungry and sick, without shelter or clean water in the middle of the rainy season. The United Nations said 200,000 children needed urgent support.

Two emergency flights organized by the U.N. refugee agency arrived in Bangladesh with aid for about 25,000 refugees. More flights are planned with the aim of helping 120,000, a spokesman said.

Worry is also growing about conditions inside Rakhine State, with fears a hidden humanitarian crisis may be unfolding. Myanmar has rejected a ceasefire declared by ARSA to enable the delivery of aid there, saying it did not negotiate with terrorists.

But Bangladeshi Prime Minister Sheikh Hasina said Myanmar should set up safe zones to enable the refugees to go home.

“Myanmar will have to take back all Rohingya refugees who entered Bangladesh,” Hasina said on a visit to the Cox’s Bazar border district where she distributed aid.

“Myanmar has created the problem and they will have to solve it,” she said, adding: “We want peaceful relations with our neighbors, but we can’t accept any injustice.

“Stop this violence against innocent people.”

Myanmar has said those who can verify their citizenship can return but most Rohingyans are stateless.

In Beijing, Chinese foreign ministry spokesman Geng Shuang said, “The international community should support Myanmar in its efforts to safeguard development and stability.”