Here Come the Dems! Hang On to Your Property 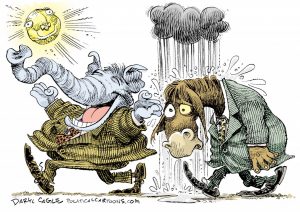 Just one year ago, we were watching Hillary Clinton stumble away from the 9/11 memorial and wondering what our future president was up to. A year later, all we have from her presidential campaign is some swag, a firmly-in-place glass ceiling at the Jacob Javits center and another Clinton book tour.

With liberals ensconced in their snuggly safe spaces where no light or reason intrudes under penalty of a fit of sobbing, President Trump withdrew the U.S. from the eight-year safe space it had occupied. World climate change paid for by the U.S. taxpayer? Out. Recognizing as legitimate, identities which just a few years ago would have ended in the mental asylum? Out. Consider the United Nations a dispassionate arbiter of world conflicts? Out, out, out.

Not much happened this past week politically, but at least now we know why Clinton lost. Her latest book promises an autopsy into what happened, but it just gives an insider’s look on why things didn’t happen.

Ha ha, those primitive residents of Saginaw and Waukesha.

But most of all she blames Bernie.

Bernie Sanders was her Democratic primary opponent and he hurled accusations at her that she wasn’t a proper Democrat. That, she admonished the socialist senator, was “paving the way for Trump’s ‘Crooked Hillary’ campaign.”

“I am proud to be a Democrat and I wish Bernie were too,” she zinged.

But in hindsight, he was right and she was wrong. The Democratic party has been taken over by the Bernie Bros, lock, stock and barrel. They may as well change their name to the Democratic Socialists of America, an organization desperately in need of a leader.

In retrospect, Barack Obama was onto something when he lifted then-Harvard professor Elizabeth Warren’s line that “If you’ve got a business — you didn’t build that.” Obama was actually ahead of his time. Today’s Democratic party would abolish private property, for-profit businesses or any of the other hallmarks of a capitalist society.

Clinton’s campaign chief when she ran for a New York Senate seat in 2000 was a young man named Bill de Blasio. Here’s what he had to say in an interview with New York Magazine last week:

“What’s been hardest is the way our legal system is structured to favor private property. I think people all over this city, of every background, would like to have the city government be able to determine which building goes where, how high it will be, who gets to live in it, what the rent will be. I think there’s a socialistic impulse, which I hear every day, in every kind of community that they would like things to be planned in accordance to their needs. And I would, too. Unfortunately, what stands in the way of that are hundreds of years of history that have elevated property rights and wealth to the point that that’s the reality that calls the tune on a lot of development.”

That young man has now grown a bit older and he is today mayor of the City of New York. He owns three homes in the city and is up for reelection in two months.

“If I had my druthers” — meaning, if I get reelected — “the city government would determine every single plot of land, how development would proceed. And there would be very stringent requirements around income levels and rents. That’s a world I’d love to see, and I think what we have, in this city at least, are people who would love to have the New Deal back, on one level. They’d love to have a very, very powerful government, including a federal government, involved in directly addressing their day-to-day reality.”

However, he lamented, “It’s not reachable right now.”

This, my friends, is today’s Democratic party. Hillary Clinton’s sob tour these next three months will just remind people who don’t like Mr. Trump what the alternative would have been, but it won’t bring back the once-great Democratic party of Scoop Jackson and Harry Truman. Or Bill Clinton, for that matter.

That ship has sailed. We’re just one election off from the barbarians at the gate. Hang on to your property.