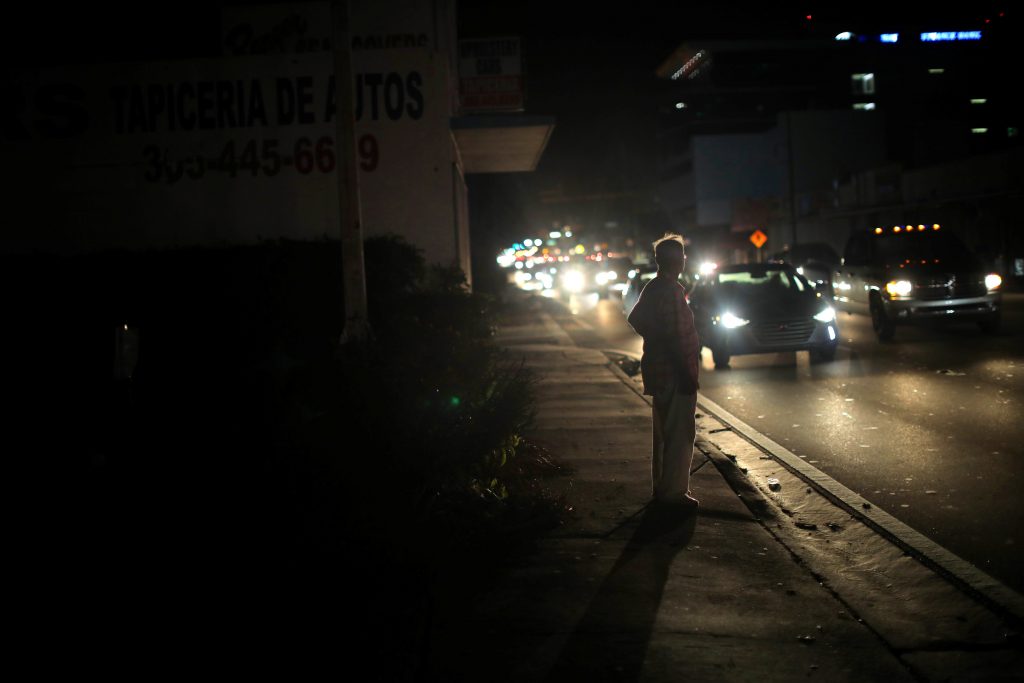 Aid was rushed in to hurricane-scarred Florida early Tuesday, residents began to dig out, and officials slowly pieced together the scope of Irma’s vicious path of destruction across the peninsula.

Even as glimmers of hope emerged from parts of the state that forecasters once worried would be razed by the storm, the fate of the Florida Keys, where Irma rumbled through with Category 4 muscle, remained largely a question mark. Communication and access were cut and authorities dangled only vague assessments of ruinous impact.

“It’s devastating,” Florida Gov. Rick Scott said after emerging from a Monday fly-over of the Keys.

A Navy aircraft carrier was due to anchor off Key West to help in search-and-rescue efforts. Drinking water supplies in the Keys were cut off, fuel was running low and all three hospitals in the island chain were shuttered. The governor described overturned mobile homes, washed-ashore boats and rampant flood damage.

A stunning 13 million people, two-thirds of the third-largest state’s residents, plodded on in the tropical heat without electricity, and nearly every corner of Florida felt Irma’s power. In a parting blow to the state before pushing on to Georgia and beyond, the storm caused record flooding in and around Jacksonville, causing untold damage and prompting dozens of rescues. It also spread misery into Georgia and South Carolina as it moved inland with winds at 50 mph (80 kmh), causing flooding and power outages.

Six deaths in Florida have been blamed on Irma, along with three in Georgia and one in South Carolina. At least 35 people were killed in the Caribbean.

More than 180,000 people huddled in shelters in the Sunshine State and officials warned it could take weeks for electricity to be restored to everyone.

The governor said it was way too early to put a dollar estimate on the damage.

Around the Tampa-St. Petersburg area, where Irma rolled through early Monday, damage appeared modest. And the governor said damage on the southwest coast, including in Naples and Fort Myers, was not as bad as feared. In the Keys, though, he said “there is devastation.”

“It’s horrible, what we saw,” Scott said. “I know for our entire state, especially the Keys, it’s going to be a long road.”

He said the Navy dispatched the USS Iwo Jima, USS New York and the aircraft carrier Abraham Lincoln to help with relief efforts.

Emergency managers in the islands declared Monday “the Keys are not open for business” and warned that there was no fuel, electricity, running water or cell service and that supplies were low and anxiety high.

“HELP IS ON THE WAY,” they promised on social media.

The Keys are linked by 42 bridges that have to be checked for safety before motorists can be allowed in, officials said. The governor said the route also needs to be cleared of debris and sand, but should be usable fairly quickly.

In the Jacksonville area, close to the Georgia line, storm surge brought some of the worst flooding ever seen there, with at least 46 people pulled from swamped homes.

The Jacksonville Sheriff’s Office warned residents along the St. Johns River to “Get out NOW.”

“If you need to get out, put a white flag in front of your house. A t-shirt, anything white,” the office said on its social media page. “Search and rescue teams are ready to deploy.”

A tornado spun off by Irma was reported on the Georgia coast, and firefighters inland had to rescue several people after trees fell on their homes.

A tropical storm warning was issued for the first time ever in Atlanta, and school was canceled in communities around the state. More than 1.5 million customers were without power Monday night in Georgia.

Irma, weakened to a tropical depression, is expected to push into Alabama, Mississippi and Tennessee over the next two days.

People in the heavily populated Tampa-St. Petersburg area had braced for the first direct hit from a major hurricane since 1921. But by the time Irma arrived in the middle of the night Monday, its winds were down to 100 mph or less.

“When that sun came out this morning and the damage was minimal, it became a good day,” Tampa Mayor Bob Buckhorn said.