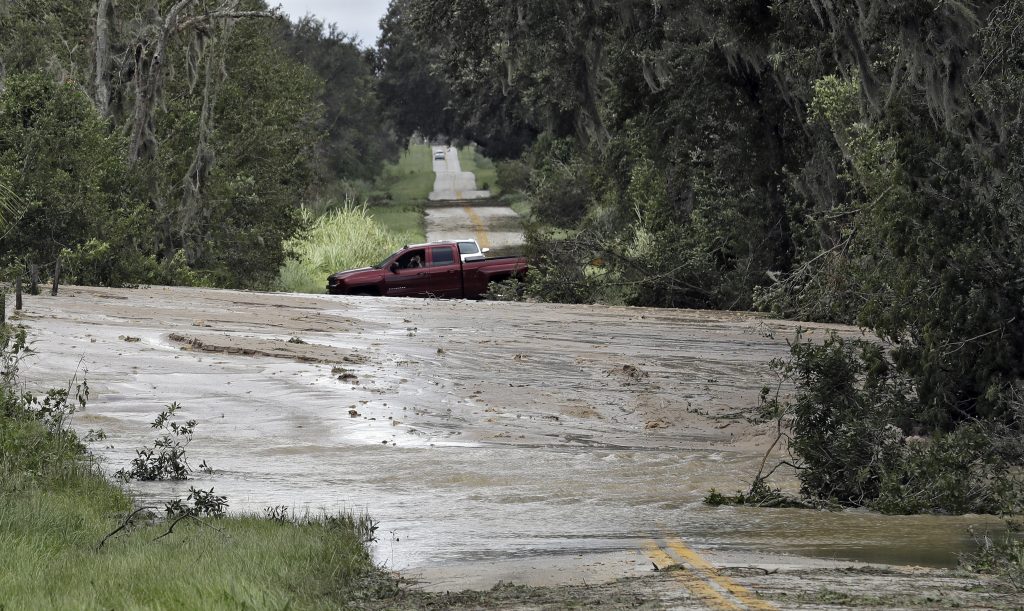 Hurricane Irma weakened into a still-dangerous tropical storm Monday as it pushed inland, triggering record flooding in Florida’s northeastern corner, while rescuers in its soggy, wind-battered wake mobilized to reach victims and learn the full extent of the damage.

The storm engulfed nearly the entire Florida peninsula, wreaking havoc from the state’s southernmost point up to the Georgia line, from the Atlantic coast to the Gulf side. It swamped homes, uprooted massive trees, flooded streets, cast boats ashore, snapped miles of power lines and toppled construction cranes.

“How are we going to survive from here?” asked Gwen Bush, who waded through thigh-deep floodwaters outside her central Florida home to reach National Guard rescuers and get a ride to a shelter. “What’s going to happen now? I just don’t know.”

More than 6.2 million homes and businesses remained without power, and 220,000 people huddled in shelters. Officials warned that it could take weeks for electricity to be restored to everyone.

No deaths in Florida were immediately linked to the storm. At least 34 people were killed in the Caribbean as Irma — at one point the most powerful hurricane ever recorded in the open Atlantic, with winds up to 185 mph — ravaged a string of resort islands long known as vacation playgrounds for the rich.

By Monday morning, Irma was downgraded to a tropical storm, with winds of 65 mph.

Irma’s wrath in the Sunshine State stretched hundreds of miles.

In the Keys, where the storm roared ashore Sunday morning with winds of 130 mph, video showed houses shoved from their foundations and boats tossed onto the pavement. In Coral Gables, near Miami, fallen trees made streets look like jungle, and damaged power lines buzzed.

And more than 400 miles from where Irma first came ashore, storm surge brought flooding to the Jacksonville area at levels not seen in more than 50 years, with at least 46 people pulled from swamped homes.

The Jacksonville Sheriff’s Office warned residents along the St. Johns River to “Get out NOW.”

“If you need to get out, put a white flag in front of your house. A t-shirt, anything white,” the office said on its social-media paqe. “Search and rescue teams are ready to deploy.”

The full breadth of the damage statewide remained unclear, though, with communications and travel cut off by high winds and flooding. Search crews planned to go door-to-door in the hard-hit Keys to check on residents.

Around midday, Irma’s center began pushing into Georgia, where a tornado spun off by the storm was reported on the coast, and firefighters inland had to rescue several people after trees fell on their homes.

A tropical storm warning was issued for the first time ever in Atlanta, and school was canceled in communities around the state. More than 100,000 customers were without power in Georgia and over 80,000 in South Carolina.

Over the next two days, Irma is expected to push to the northwest, into Alabama, Mississippi and Tennessee.

People in the heavily populated Tampa-St. Petersburg area were braced for its first direct hit from a major hurricane since 1921. But by the time it struck in the middle of the night Monday, its winds were down to 100 mph or less.

Tampa Mayor Bob Buckhorn said the situation was not as bad as it could have been but warned residents that dangerous storm surge continued. He also reported downed power lines and other debris.

“What we feared the most was the surge,” he said on MSNBC. “The surge is yet to be finished.”

In Redington Shores west of Tampa, Carl Roberts spent a sleepless night riding out Irma in his 17th-floor beachfront condo. After losing power late Sunday, he made it through the worst of the storm shaken but unhurt.

“The hurricane winds lashed the shutters violently, throughout the night,” he wrote in a text message, “making sleep impossible.”

As morning broke, he couldn’t open the electric shutters to see outside.

East of Tampa, winds knocked a utility pole and power lines onto a sheriff’s cruiser late Sunday in Polk County. A deputy and a paramedic, who had just escorted an elderly patient to safety, were trapped for two hours until a crew could free them. Both were unhurt.

And more than 120 homes were being evacuated early Monday in just outside Orlando as floodwaters started to pour in. Firefighters and National Guardsmen went door-to-door and used boats to ferry families to safety.

A few miles away, 30 others had to be evacuated when a 60-foot sinkhole opened up under an apartment building. No injuries were reported.