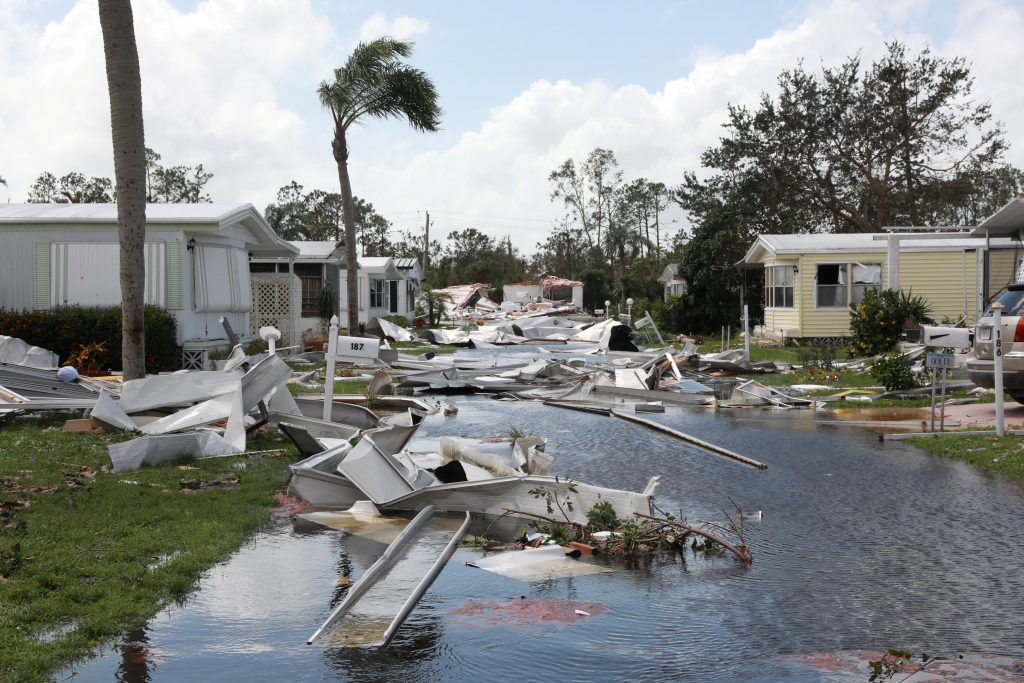 Storm-shocked Floridians returned to their shattered homes on Monday as the remnants of once-powerful Hurricane Irma pushed inland, leaving well over half of residents without power and flooding cities in the state’s northeastern corner.

Downgraded to a tropical storm early on Monday, Irma once ranked as one of the strongest Atlantic hurricanes on record days before barreling into the Florida Keys on Sunday and plowing northward along the Gulf Coast to wreak havoc across a wide swath of the state.

Especially hard hit was the resort archipelago of the Keys, extending into the Gulf of Mexico from the tip of Florida’s peninsula and connected to the mainland by a single, narrow highway, Governor Rick Scott told a news conference on Monday.

“There’s devastation,” he said, adding that virtually every mobile-home park on the island chain was left upended. “It’s horrible, what we saw.”

In Miami, which escaped the worst of Irma’s winds but experienced heavy flooding, residents in the city’s Little Haiti neighborhood returned to the wreckage of trailer homes that were shredded by the storm.

“I wanted to cry, but this is what it is, this is life,” Melida Hernandez, 67, who had ridden out the storm at a nearby church, said as she gazed at the ruins of her dwelling, split in two by a fallen tree.

Flooding was reported on Monday in northeastern Florida, including Jacksonville, where police were rescuing residents from waist-deep water.

“Stay inside. Go up. Not out,” Jacksonville’s website warned residents. “There is flooding throughout the city.” The city also warned residents to be wary of snakes and alligators driven into the floodwaters.

Still, the scope of Florida’s damage paled in comparison with the utter devastation left by Irma as a rare Category 5 hurricane in parts of the Caribbean, where the storm killed nearly 40 people — at least 10 of them in Cuba — before turning its fury on Florida.

The storm claimed its first known U.S. fatality over the weekend in the Keys — a man found dead in a pickup truck that had crashed into a tree in high winds, but there was no immediate word on further casualties.

The Keys were largely evacuated before the storm hit, and police established a checkpoint on Monday to keep residents from returning while authorities work to restore power, water, fuel supplies and medical service.

No timetable for reopening the Keys was given, but Miami-Dade County police detective Alvaro Zabeleta, speaking for local authorities, said the message for evacuees was: “Today, for sure, it’s not happening.”

Some 6.5 million people, about one-third of Florida’s population, had been ordered from their homes ahead of Irma’s arrival, and more than 200,000 people sought refuge in about 700 shelters, according to state data.

Scott urged evacuees all over the state to stay put for now rather than rush home, saying downed power lines, debris and other hazards abounded. “Don’t put any more lives at risk,” he said.

He noted, however, that damage to Florida’s west coast, which bore the brunt of the storm after Irma left the Keys, was less severe than had been feared.

One of the biggest lingering problems was widespread power outages, with utilities reporting 7.3 million homes and businesses without electricity in Florida and neighboring states. They said it could take weeks to fully restore service.

Scott said 65 percent of Florida was without power.

Travel into and out of the state likewise remained stymied. Miami International Airport, one of the busiest in the country, halted passenger flights through at least Monday.

With sustained winds of up to 60 miles per hour, Irma had crossed into Georgia by midday, posing a threat of torrential rains and flooding there and other states in the U.S. Southeast.

Some residents who fled the Keys before Irma roared ashore with winds up to 130 mph grew angry as authorities barred them from returning to their homes on Monday.

A few dozen people argued with police who turned them away from the first of a series of bridges leading to the island chain.

“I would expect that the Keys are not fit for re-entry for regular citizenry for weeks,” Tom Bossert, a homeland security advisor to U.S. President Donald Trump, told a White House news briefing.

Irma’s arrival in Florida came about two weeks after Hurricane Harvey claimed about 60 lives and caused property damage estimates as high as $180 billion after pummeling the Gulf Coasts of Texas and Louisiana with heavy rains and severe flooding.

That tally, lower than earlier forecasts of up to $50 billion in insured losses, helped spur a relief rally on Wall Street as fears eased that Irma would cut into U.S. economic growth.

As shelters began to empty on Monday, some 7,000 people filed out of Germain Arena in Estero, south of Fort Myers. The crowd included Don Sciarretta, who rode out the storm with a 90-year-old, Elsie Johnston, who suffers from Alzheimer’s disease.

Sciarretta, 73, spent two days without sleep, holding up a slumped-over Johnston and making sure she did not fall out of her chair. He relied on other people in the shelter to bring the pair food, often after waiting in hours-long lines.

“For the next storm, I’ll go somewhere on my own like a hotel or a friend’s house,” Sciarretta said. “I’m not going through this again.”