Authorities are urging people who chose to ride out Hurricane Irma in the Florida Keys to remain indoors until the storm passes.

The U.S. National Hurricane Center in Miami said that Hurricane Irma’s northern eyewall reached the lower Florida Keys Sunday morning. The eyewall is a band of clouds surrounding the center of the storm that has intense winds and strong rain.

Hundreds of thousands of people lost power Sunday morning in Florida as Hurricane Irma’s winds and rain lash the state. Irma’s center was over water off Key West early Sunday, but places including Miami were being hit with strong winds and rain.

Florida Power & Light Company said that about 430,000 customers were without power Sunday morning. Miami-Dade County had the most outages with about 250,000. Broward County had 130,000 outages. Palm Beach County had more than 40,000 outages.

The utility said that it has mobilized crews and is working to restore power as soon as it can.

Speaking to Hamodia from her home in Miami after Shabbos, Mrs. D. said that she had spent Shabbos at home with her family.

“We had a beautiful Shabbos, through shalosh seudos,” she said. “The tropical storm winds picked up and just as Shabbos was over we lost power.

“We are now using lanterns that we prepared,” she said. “The current forecast is that the hurricane is moving west and will not affect Miami directly, but we are still predicted to get very strong winds and rain throughout Sunday. It will hopefully not be as strong as they predicted.” 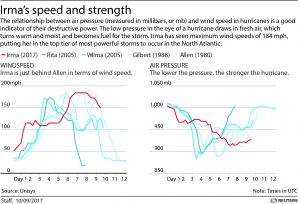 In an online post early Sunday, Key West Police urged people who stayed for the hurricane to remain where they took shelter until the storm had passed completely. They also urged people not to go outside when the eye of the storm is over there area, a time period when conditions can seem deceptively calm.

With Hurricane Irma closing in on Florida, the storm’s winds are already lashing parts of the state.

As of 6 a.m. EDT, forecasters say the Category 4 storm is centered about 30 miles south of the island.

Meanwhile, to the north, access to all of Pinellas County’s barrier islands, including the popular spring break destination of Clearwater Beach, has been shut off.

Irma’s maximum sustained winds are near 130 mph. The hurricane center says weakening is forecast, but Irma is expected to remain a powerful hurricane as it moves through the Florida Keys and near Florida’s west coast.