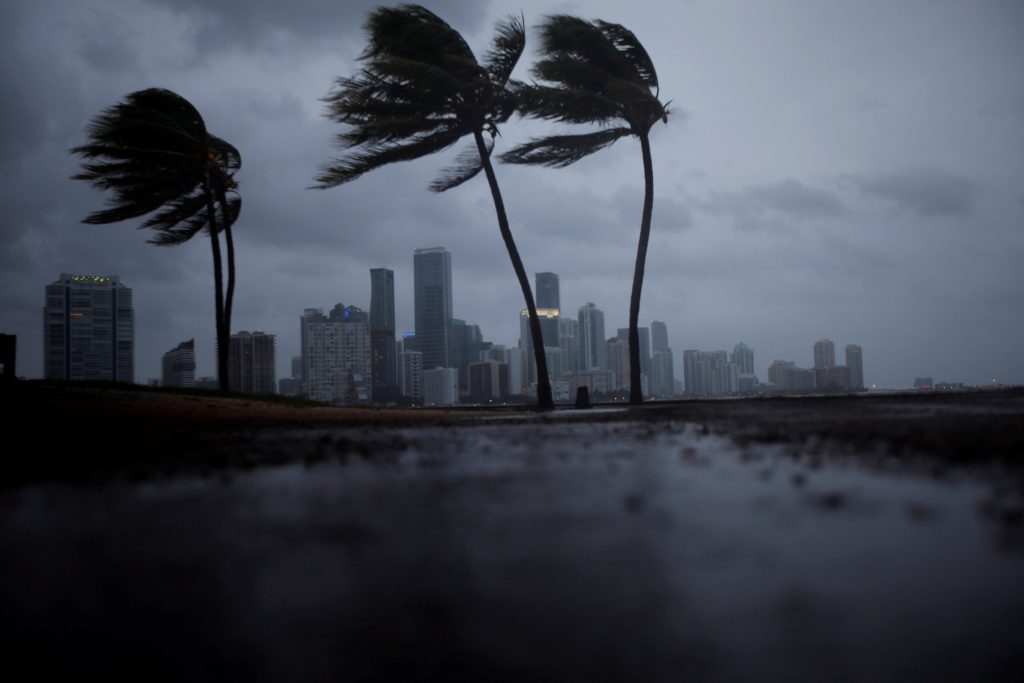 Hurricane Irma gained strength as it was set to make landfall in Florida on Sunday with a double barrel threat of destructive winds and life-threatening storm surges, prompting one of the largest evacuations in U.S. history.

The storm, which went on a deadly march up Cuba’s northern coast a day earlier, was a Category 4 hurricane about 30 miles south-southeast of Key West, Florida, as of 6 a.m. EDT with maximum sustained winds of 130 mph, the National Hurricane Center (NHC) said.

It was on a path that would take it along the state’s Gulf of Mexico coast near population centers including Tampa and St. Petersburg, it said.

Storm surges pushed by a high tide were forecast to be as high as 15 feet for low-lying area along the state’s southwest coast on Sunday, which could produce catastrophic flooding for thousands of homes.

“Take action now to protect your life,” the National Weather Service in Key West advised. “This is an extremely dangerous and life-threatening situation.”

Irma, which killed at least 22 people in the Caribbean, was likely to cause billions of dollars in damage to the third-most-populous U.S. state.

Wind gusts near hurricane force began to batter the Florida Keys late on Saturday, the NHC said, with Key West seeing gusts of more than 80 mph on Sunday morning and water levels about 2 feet above normal. The area was expected to feel the full brunt of Irma starting at around 7 a..m. to 8 a.m.

Tens of thousands of people huddling in shelters watched for updates as the storm swung to the west, now potentially sparing Tampa as well as Miami the catastrophic head-on blow forecasters had been warning about for days.

But those few miles meant St. Petersburg could get a direct hit, rather than its more populous twin across Tampa Bay. Neither city has suffered a major hurricane in nearly a century.

The leading edge of the immense storm bent palm trees and pelted rain across South Florida, knocking out power to more than 170,000 homes and businesses, as the eye approached Key West.

Florida Gov. Rick Scott had warned residents in the state’s evacuation zones Saturday that “this is your last chance to make a good decision.” About 6.4 million people were told to flee.

But because the storm is 350 to 400 miles wide, the entire Florida peninsula was exposed. Forecasters said the greater Miami area of 6 million people could still get life-threatening hurricane winds and storm surge of 4 to 6 feet.

Irma was at one time the most powerful hurricane ever recorded in the open Atlantic with a peak wind speed of 185 mph last week. It left more than 20 people dead across the Caribbean, and as it moved north over the Gulf of Mexico’s bathtub-warm water of nearly 90 degrees, it was expected to regain strength.

Meteorologists predicted Irma would plow into the Tampa Bay area Monday morning. The area has not been struck by a major hurricane since 1921, when its population was about 10,000, National Hurricane Center spokesman Dennis Feltgen said. Now around 3 million people live there.

Irma’s course change caught many off guard and triggered a major round of last-minute evacuations in the Tampa area. Many businesses had yet to protect windows with plywood or hurricane shutters. Some locals grumbled about the forecast, even though Florida’s west coast had long been included in the zone of probability.

“For five days, we were told it was going to be on the east coast, and then 24 hours before it hits, we’re now told it’s coming up the west coast,” said Jeff Beerbohm, a 52-year-old entrepreneur in St. Petersburg. “As usual, the weatherman, I don’t know why they’re paid.”

Nearly the entire Florida coastline remained under hurricane watches and warnings, and the latest projections could shift again, sparing or savaging other parts of the state.

Forecasters warned of storm surge as high as 15 feet.

“This is going to sneak up on people,” said Jamie Rhome, head of the hurricane center’s storm surge unit.

The westward shift prompted Pinellas County, home to St. Petersburg, to order 260,000 people to leave, while Georgia scaled back evacuation orders for some coastal residents. Motorists heading inland from the Tampa area were allowed to drive on the shoulders.

Given its mammoth size and strength and its course up the peninsula, it could prove one of the most devastating hurricanes ever to hit Florida, and inflict damage on a scale not seen there in 25 years.