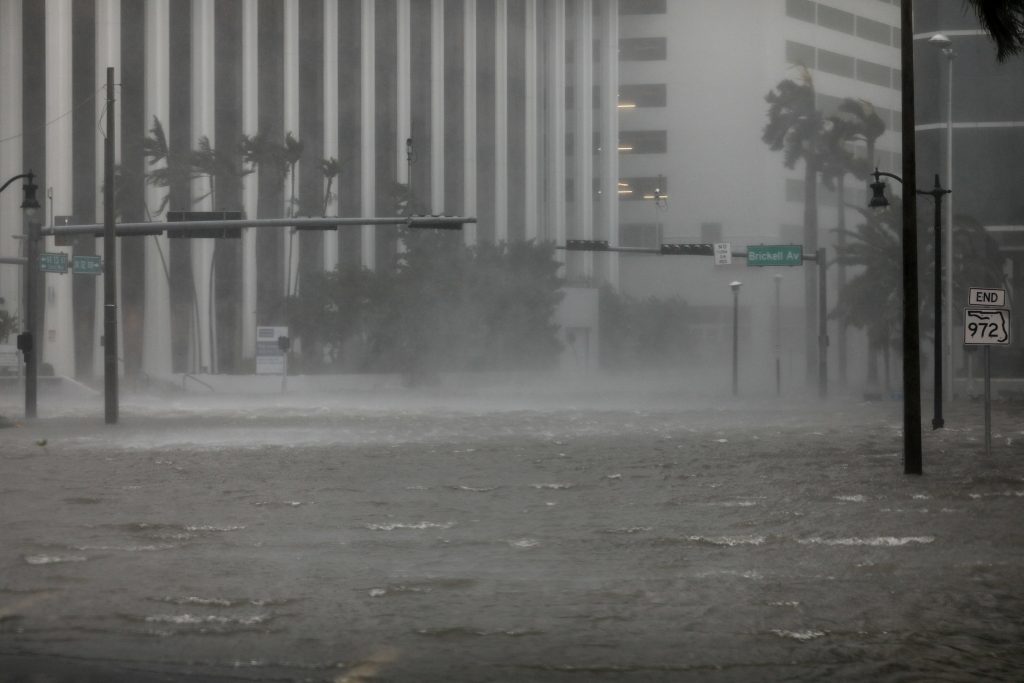 Extremely dangerous Hurricane Irma crashed into the Florida Keys on Sunday morning, unleashing violent wind gusts and storm-surge flooding. Florida’s western coast is now facing Irma’s wrath, and forecasters fear this storm will go down as one of the worst in the state’s history.

At 4 p.m., the storm was centered 10 miles southeast of Naples, which reported a wind gust of 135 mph shortly thereafter. The storm was headed north at 12 mph toward Cape Coral and Fort Myers. At 3:35 p.m. Sunday, it had made its second landfall of the day over Marco Island, where a wind gust of 130 mph was reported.

The storm’s peak winds had dropped 15 mph from the morning, classifying it as a Category 3 hurricane (down from a 4). Even with slow weakening likely to continue as the storm interacts with lands, it remains very serious and life-threatening. The storm was predicted to move up the west coast of Florida into Sunday night.

Winds in excess of 100 mph were expected to batter numerous population centers along the western coast, including Fort Myers, Sarasota, and up the coast to Tampa. And coastal waters could rise 10 to 15 feet above normally dry land, inundating homes, businesses and roads, an “imminent danger,” according to the National Hurricane Center.

“The Keys through Tampa will likely experience the worst storm surge event that area has seen in generations,” said Bill Read, a former Hurricane Center director.

When Irma crashed into the Keys early Sunday as a Category 4, following Hurricane Harvey’s assault in Texas, it marked the first time on record that two Category 4 storms had made landfall in the United States in the same year.

Because of the storm’s magnitude, the entire state of Florida is being severely affected by damaging winds and torrential rains. Tropical storm and hurricane conditions were also predicted to spread into the Florida Panhandle, eastern Alabama, much of Georgia, and southern South Carolina by Monday.

An extreme wind warning was issued for Naples through 5:30 p.m. due to the likelihood of destructive winds up to 120 mph. As the eyewall moved over Naples, it reported sustained winds of 93 mph and a gust to 135 mph. Marco Island also clocked a 130-mph gust.

The Weather Service also issued a flash-flood emergency for this same area through 6 p.m. due to the expected sudden onset of storm surge flooding.

Prior to the arrival of the storm center, water was actually retreating from Naples to Tampa due to offshore winds from the east pulling the sea back. But forecasters warned residents that about two to three hours after the storm’s center passed to the north and winds blew back onshore, waters would rush back in rapidly causing severe inundation.

Miami International Airport clocked a gust to 94 mph and an isolated gust hit 100 mph at the University of Miami. Over 2 million customers were without power, mostly in Miami-Dade, Broward and Palm Beach counties.

At the same time, the seas had risen several feet above normally dry land. Social media photos and videos showed water pouring through Miami’s streets, in between high-rises, amidst sideways sheets of rains.

As the storm’s spiral bands walloped south and central Florida, the potential for tornadoes arose in the swirling air, and the Weather Service issued watches and warnings. Witnesses captured photographs of a twister moving off the ocean toward Fort Lauderdale on Saturday evening.

While the core of the storm and worst winds had passed the Keys, the Weather Service warned storm surge flooding was ongoing as winds on the storm’s backside shoved water over the islands. Gusts still reached 50 to 70 mph through 3 p.m.

WARNINGS IN EFFECT IN FLORIDA, AND PREDICTED SURGE HEIGHT AND WINDS

Hurricane warnings cover all of Florida except the western Panhandle, where a tropical storm warning was in effect.

A storm-surge warning was also issued for much of the Florida Peninsula (except for a small section from North Miami Beach to Jupiter Inlet), and even extended up the Georgia coast into southern South Carolina. The Hurricane Center said that this would bring the risk of “dangerous” and “life-threatening” inundation, and that the threat was highest along Florida’s southwest coast and in the Florida Keys, where it said the surge is expected to be “catastrophic.”

“In Southwest Florida – the Naples-Ft. Myers-Cape Coral area, the potential exists for the worst hurricane in history,” Norcross said.

Because of the shift in the most likely storm track to the west, Miami and southeast Florida were most likely to miss the storm’s intensely destructive core, known as the eyewall, where winds are strongest. Even so, because of Irma’s enormous size, the entire Florida Peninsula and even the Panhandle were likely to witness damaging winds. The National Hurricane Center warned that the storm would bring “life-threatening wind impacts to much of the state.”

Conditions will continue to deteriorate Sunday over Florida from south to north as Irma chugs up the coast.

Wind gusts of up to 50 to 70 mph should continue into the evening.

A catastrophic storm surge of 5 to 10 feet or more is expected to inundate much of the island chain. Heavy rain will add to the water problems, as anywhere from 5 to 10 inches of additional rain will fall before the worst of the storm is over. Unfortunately, the damage potential on the Keys could be landscape-altering after taking a direct hit from this storm.

Sustained winds of 45 to 70 mph with gusts of 80-plus mph will last well into Sunday afternoon.

Swirling winds at all levels of the atmosphere have also increased the chances of tornadoes developing at any point on Sunday, especially in locations right along the water. Rainfall totals of four to eight inches or more are expected on Sunday alone, which may exacerbate localized flooding. With Irma’s last-minute track shift to the west, the storm surge won’t be as big of a concern here as it is elsewhere, with a two- to four-foot surge expected along much of Florida’s east coast.

Irma’s ultimate destination will be along the west coast of Florida. This means the conditions will deteriorate rapidly from Naples to Tampa Bay throughout Sunday afternoon. However, Irma’s path will take it parallel to the west coast of Florida, keeping the entire region engulfed in the dangerous northeast quadrant of the storm, where winds are strongest. Sustained hurricane force winds and gusts over 100 mph should arrive in Naples Sunday afternoon and in St. Petersburg/Tampa Bay into the evening.

The most dangerous hazard for this region will be the extreme storm surge. Nowhere in the entire state will the storm-surge levels be higher than along the gulf-facing coast, with storm surge totals of eight to 12 feet and locally up to 15 feet forecast. Any coastal city from Tampa Bay south to Naples is at risk, with historic flooding (the likes of which haven’t been seen in this area since Hurricane Donna in 1960) threatening thousands of people and structures.

Inland areas won’t escape the effects of Irma. The storm is extremely large in size, with tropical-storm-force winds extending outward over 200 miles from the center. The wind speeds in central Florida and the Orlando area will start to pick up by late Sunday afternoon, with sustained winds of 40 to 60 mph and gusts of 70-plus mph lasting from late Sunday night through Monday morning.

Heavy rain will also cause problems, with a general six to 12-plus inches of rain expected by the time the storm is over. The threat of tornadoes will increase by Sunday night, as well, as the storm’s center tracks north along the west coast of Florida.

The northeast portion of Florida will be spared the worst of Irma but won’t escape unscathed. Sustained tropical-force winds of 40 to 55 mph will overspread the area from Daytona Beach to Jacksonville by Sunday evening, with the worst winds (gusts up to 70 mph) occurring overnight. Heavy rain will be a story line here as six to 10-plus inches of rain is expected to fall in a relatively short period.

As with other parts of the state, the tornado threat will peak overnight on Sunday as Irma’s storm center tracks northward.

Storm-surge values will be elevated (two to four feet) but should result in only minor to moderate coastal flooding.

Hazard threats: Wind, rain and, at the coast, storm surge

Hurricane warnings extend well into Georgia, covering over half of the state. Parts of southern South Carolina also are under a hurricane warning, with Irma poised to maintain its hurricane-force strength for several hours after landfall.

Sustained tropical force winds of 25 to 45 mph will spread over Georgia from south to north starting late Sunday night. The strongest sustained winds (40 to 50 mph) with gusts of 60-plus mph will move in on early Monday morning, lasting through Monday evening. This includes Atlanta, which is under a tropical-storm warning, where sustained winds of 25 to 40 mph with gusts up to 60 mph will occur from about 10 p.m. Sunday night to about 5 p.m. Monday afternoon. This could lead to downed trees and outages.

Heavy rain is also expected, with storm totals of six to 10 inches forecast, the bulk of which should fall Monday.

Storm surge along the Georgia/South Carolina coast will be a hazard, as well, with the Hurricane Center predicting a surge of four to six feet. Of particular concern is the duration of the storm surge. Persistent onshore winds will extend the surge component here, with elevated water levels potentially lasting up to 36 hours.