National On Hurricane Bay, a Florida Fisherman Tries to Ride Out the Storm
National 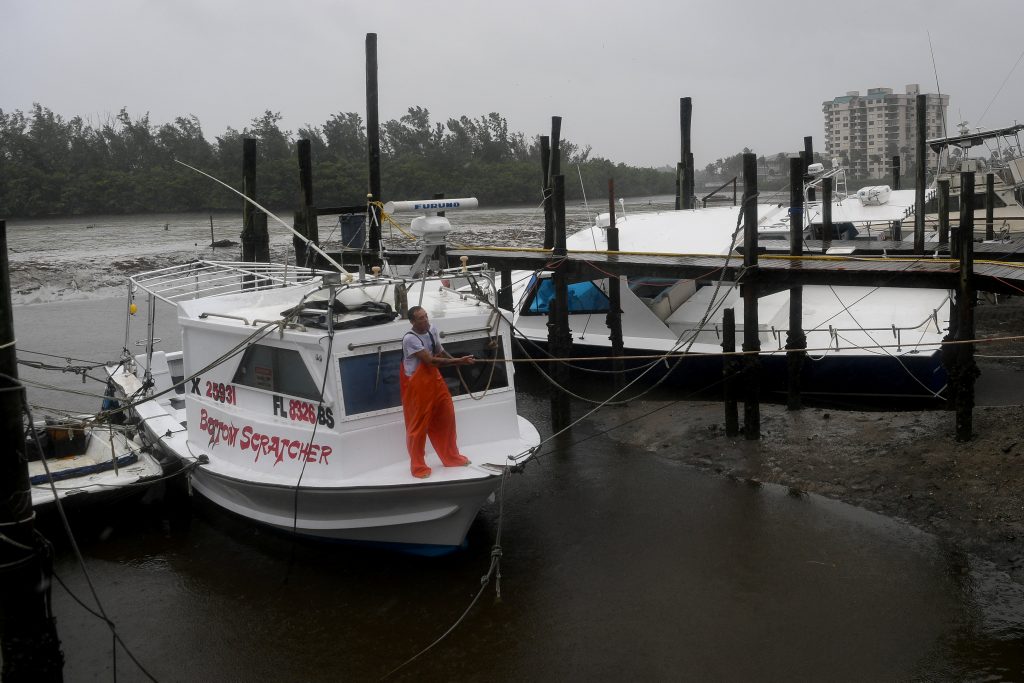 As the winds started to roar in Hurricane Bay, P.J. Pike jumped from a high dock down to his fishing boat and began lashing ropes to the mast.

The lines extended to anything solid nearby – dock posts, a palm tree, the Captain Tony’s Fishing Adventures sign, to anchor what would soon be his shelter for Hurricane Irma, one of the most powerful storms ever to hit the Florida coastline.

“I’ve been here since ’93, and I’ve never seen anything like this,” he shouted with a hoarse voice into a driving rain.

Pike has ridden out a hurricane on a boat more than once. While newscasters and Florida Governor Rick Scott have chastised those who have chosen not evacuate ahead of the storm, Pike can’t see any reason to leave the Bottom Scraper, the 33-foot boat he bought for crabbing excursions and shark-fishing charters.

“I’m a fisherman,” he said. “You protect your boat … You gotta put up some kind of fight.”

Pike grew up in New Hampshire and still speaks with a strong Northeastern accent. He first came to Florida from Louisiana after the federal government put strict limits on red snapper fishing.

Leaving the Florida storm zone was never an option, Pike said. He has family and homes and responsibilities nearby, including a cancer-stricken father who lives on a breathing machine and is now staying in a nearby hospital.

He had not slept in three days, he said, as he worked to fortify two homes he owns and his parents’ home, while gathering scarce supplies – food, water, gasoline, lumber – from nearby stores.

He would have his friend with him, as well as two large dogs, a mastiff bloodhound and a Rhodesian ridgeback.

This terrified his friends parents, who offered Pike the wisdom that public officials across the state had been repeating ad nauseam on the airwaves: You can buy another boat, but you don’t have another life.

“But I like it,” he said of the 33-foot Bottom Scraper, a 1974 model he had just purchased. “I’ve got Portuguese blood – I live on the water. I don’t want to lose the boat. I’m six weeks into it and just put a new engine in it.”

He had no worries about taking his friend onto the boat.

During Hurricane Charley, a major hurricane that smacked Florida in 2004, Pike rode out the storm with his father on a grouper boat, floating in the Gulf of Mexico, a short distance from the shore and his parents’ neighborhood.

The winds battered the boat with debris, mostly roof shingles from the neighborhood homes, Pike said. He and his father kept peeking up from the well to examine the shingles – looking for the distinctive maroon ones of his parents’ home.

A whole sheet of roof plywood, covered in maroon shingles, from his family’s home, slammed into the side of the boat.