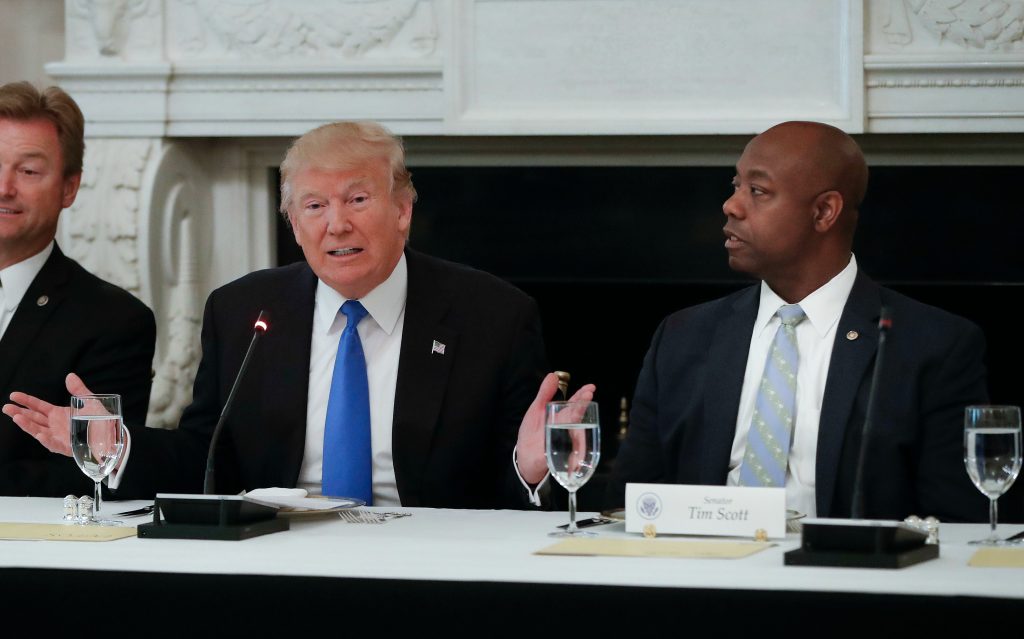 Sen. Tim Scott, R-S.C., who said President Donald Trump’s “moral authority” was “compromised” by his response to the white supremacist-fueled violence in Charlottesville, Virginia, last month, is set to meet with the president Wednesday to discuss issues of race and race relations, said two people familiar with the meeting.

Scott, who has been sharply critical of President Trump and his rhetoric on issues of race, had expressed interest in meeting with the president before the Charlottesville violence, the people said, but that get-together took on newfound urgency after Charlottesville.

For Mr. Trump, the meeting will serve largely as a “listening session,” one of the people added. Both spoke on the condition of anonymity.

Mr. Trump further plunged his young administration into crisis with his response to the white supremacist rally in Charlottesville, which left one counter-protester dead and several injured. At the time, Mr. Trump refused to immediately condemn the violence and said that “both sides” were to blame.

Speaking to VICE News, Scott – the only black Republican in the Senate – refused to defend the president, saying, “I’m not going to defend the indefensible,” and added that Mr. Trump’s “moral authority” had been “compromised” by his insufficient response. In the same interview, he also said that the country still had serious work to do on racial issues: “Racism is real. It is alive. It is here,” Scott said.

On CBS’ “Face the Nation” at the time, Scott also said he believed Mr. Trump needed to hear from people who have experienced the agony of racism firsthand. The one-on-one meeting Wednesday grew out of that appeal, one of the people familiar with it said.

“If the president wants to have a better understanding and appreciation for what he should do next, he needs to hear something from folks who have gone through this painful history,” Scott said on CBS. “Without that personal connection to the painful past, it will be hard for him to regain that moral authority, from my perspective.”

Scott plans to use part of his audience with the president to tell his personal story, about which he has previously spoken movingly. His grandfather dropped out of third grade, never learned to read and spent much of his life picking cotton. His mother raised him as a single parent, working long hours as a nursing assistant.

Scott and President Trump are also expected to discuss other issues facing black Americans, such as poverty and historically black universities.