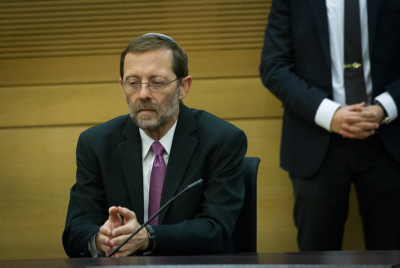 Former Likud MK Moshe Feiglin, now head of his own party called Zehut, will be selecting a pool of candidates to run in the next Knesset elections. Out of that pool, 15 candidates will be chosen to run on the party’s list – and they will be chosen in Israel’s first-ever open primary for the selection of a candidate list to run in the next Knesset elections.

The date for the final primary vote has not yet been announced, but when it does take place, all Israelis will be invited to choose from the candidates. In addition, the party will have several representatives on its list representing Jewish communities abroad – and they will be selected by Zehut party members who live outside Israel. Allowing non-Israelis to choose members of an Israeli political party’s list is a first, as well.

Among the pool of candidates running are a wide variety of Israeli “types,” including political liberals and conservatives, religious and secular. Among the candidates are Gilad Alpher, an economist and adviser to Finance Minister Moshe Kahlon; Libi Molad, a member of the New Liberal Movement; Dr. Rafael Mins, a university lecturer in physics; Yishai Fleisher, the spokesperson for the Chevron Jewish community; and Dr. Nitza Kahane, a mother of 10 and member of the research staff at the Hebrew University medical school.

Feiglin served in the 19th Knesset between 2013 and 2015, having been voted onto the Likud party list by members of his Manhigut Yehudit faction, placing him 14th on the party list. He had also run against Netanyahu for party leadership several times, garnering nearly a quarter of all votes twice. By the 2015 elections, the Likud had changed its constitution to make it more difficult for Manhigut Yehudit members to vote in primaries, and Feiglin fell to the “unrealistic” 35th position.

The Zehut platform is similar to that of his previous Manhigut Yehudit faction’s positions, when that group was one of the largest factions in the Likud. Zehut advocates annexing all of Yehudah and Shomron, with incentives for Arabs to emigrate. Those who wish to remain in Israel will have to demonstrate loyalty to the state, meeting conditions which have yet to be specified. At a recent party event, Feiglin said that “we intend to end the occupation and open the state to all Israelis for generations to come. We will ensure the civil rights of all people, including non-Jews, and we will offer various options to the Arabs of Yehudah and Shomron.”

The party’s domestic agenda advocates much more personal freedom, and much less government intervention in the daily lives of Israelis. For example, Zehut advocates instituting a voucher system, under which parents can send their children to the school of their choice, with tuition covered by the state, as an alternative to centralized public education. Housing prices would be reduced by the reduction of involvement by quasi-government agencies, such as the Israel Lands Administration, the nominal “owner” of over 90 percent of the land in Israel. Feiglin, an observant Jew, also advocates reducing the role of the Chief Rabbinate in the life of the state, for example, privatizing kashrus along the lines of the various Badatzim as opposed to having the Rabbinate involved in hashgachah. He would also promote turning the IDF into a volunteer army, eventually eliminating the draft.