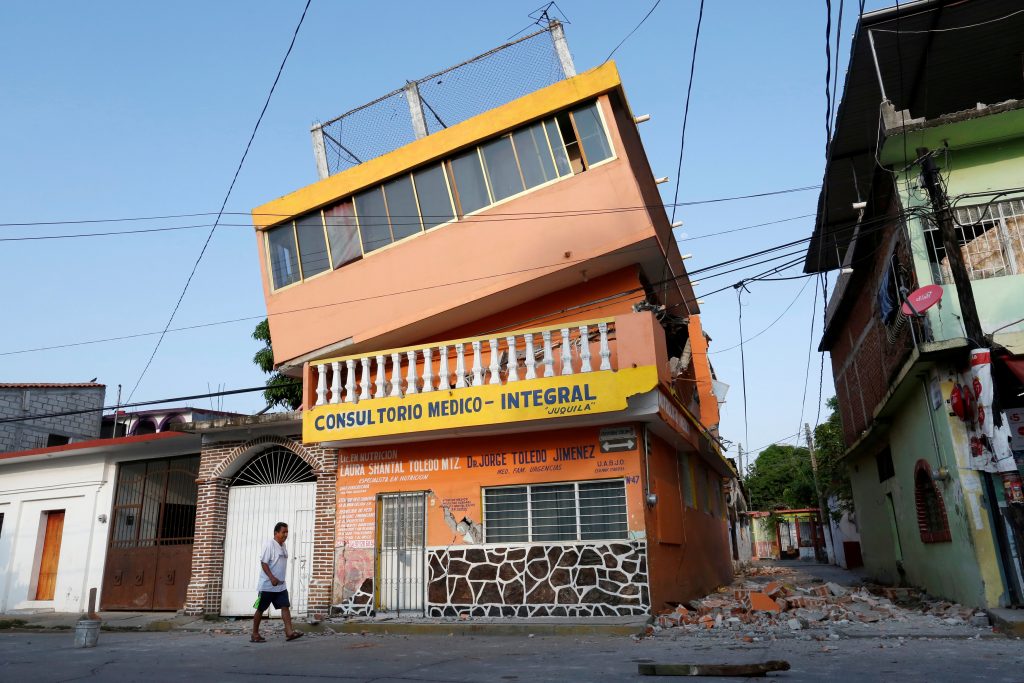 Amid the sounds of snare drums, saxophones and sobbing, Mexicans on Saturday began mourning some of the 66 dead after a monster earthquake and a Gulf coast hurricane.

Scenes of mourning were repeated over and over again in Juchitan, where a third of the city’s homes collapsed or were uninhabitable, President Enrique Pena Nieto said late Friday in an interview with the Televisa news network. Part of the city hall collapsed.

The remains of brick walls and clay tile roofs cluttered streets as families dragged mattresses onto sidewalks to spend a second anxious night sleeping outdoors. Some were newly homeless, while others feared further aftershocks could topple their cracked adobe dwellings.

Rescuers searched for survivors with sniffer dogs and used heavy machinery at the main square to pull rubble away from city hall, where a missing police officer was believed to be inside.

The city’s civil defense coordinator, Jose Antonio Marin Lopez, said similar searches had been going on all over the area.

Teams found bodies in the rubble, but the highlight was pulling four people, including two children, alive from the completely collapsed Hotel Del Rio, where one woman died.

“The priority continues to be the people,” Marin said.

In addition to the deaths in Juchitan, nine other people died in Oaxaca, while 19 people were killed by the quake in neighboring states. Two others died in a mudslide in the Gulf coast state of Veracruz after Hurricane Katia hit late Friday.

Pena Nieto said authorities were working to re-establish supplies of water and food and provide medical attention to those who need it. He vowed the government would help rebuild.

Power was cut at least briefly to more than 1.8 million people due to the quake, and authorities closed schools in at least 11 states to check them for safety.

The Interior Department reported that 428 homes were destroyed and 1,700 were damaged just in Chiapas, the state closest to the epicenter.

Veracruz Gov. Miguel Angel Yunes said two people died in a mudslide related to the storm, and he said some rivers had risen to near flood stage, but there were no reports of major damage.

Veracruz and neighboring Puebla states evacuated more than 4,000 people ahead of the storm’s arrival.

The Hurricane Center said Katia could still bring 3 to 6 inches of additional rain to a region with a history of deadly mudslides and flooding.