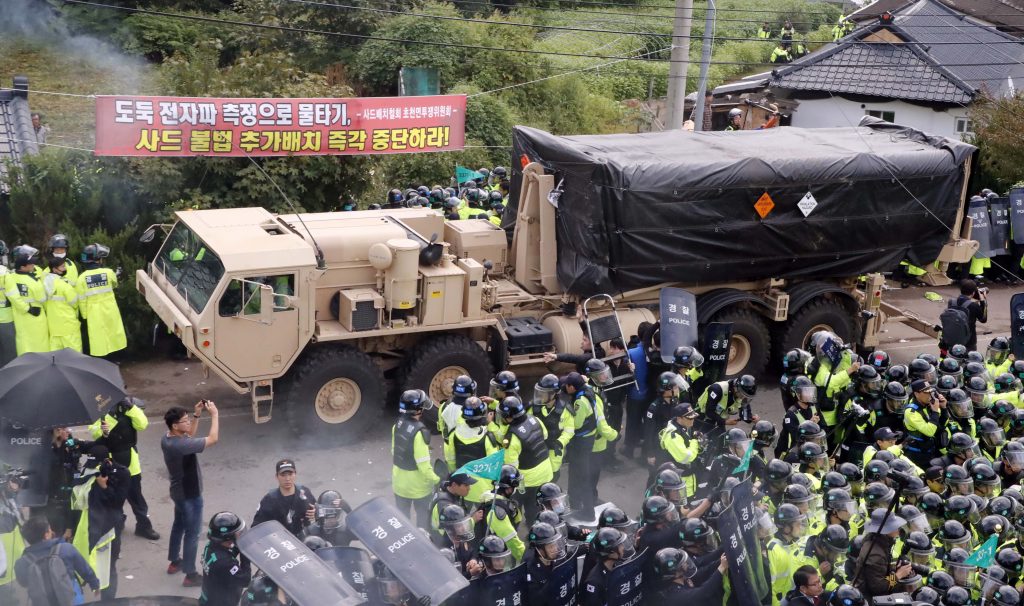 Dozens of people were injured in clashes between South Korean protesters and police Thursday as the U.S. military added more launchers to the high-tech missile-defense system it installed in a southern town to better cope with North Korean threats.

Seoul has hardened its stance against Pyongyang after its torrent of weapons tests, the latest a detonation Sunday of what North Korea said was a thermonuclear weapon built for missiles capable of reaching the U.S. mainland.

The clashes came as South Korean President Moon Jae-in and Japanese Prime Minster Shinzo Abe met in eastern Russia and repeated their calls for stronger punishment of North Korea over its nuclear ambitions, including denying the country oil supplies. The demand contradicted the stance of their host, Russian President Vladimir Putin, who in an earlier meeting with Moon dismissed sanctions as a solution.

In the rural town of Seongju, thousands of police officers in riot gear swarmed around some 400 protesters who since Wednesday night had been occupying a road leading to a former golf course where the Terminal High-Altitude Area Defense System is installed.

The officers also broke the windows of several cars the protesters were using to block the road and towed the vehicles away. A fire department official in Seongju said 38 people, including six police officers, were injured, none seriously. The official spoke on condition of anonymity, citing office rules.

Several U.S. military vehicles, including trucks carrying payloads covered in black sheets that appeared to be launchers, had been seen heading toward the site.

A THAAD battery normally consists of six launchers capable of firing up to 48 interceptor missiles, but only two launchers have been operational so far. South Korea’s Defense Ministry couldn’t immediately confirm when the four launchers added on Thursday will be operationally capable. Seongju residents and activists are worried over rumored health hazards and the possibility of being targeted in North Korean attacks.

In their meeting in Vladivostok, Moon and Abe agreed to cooperate on seeking tougher United Nations sanctions against North Korea and pledged to strengthen efforts to persuade Beijing and Moscow into cutting off oil supplies to the North, said Yoon Young-chan, Moon’s chief press secretary.

“We should not give in to emotions and push Pyongyang into a corner,” Putin said in a news conference after meeting with Moon on the sidelines of a conference on economic development of Russia’s Far East. “As never before, everyone should show restraint and refrain from steps leading to escalation and tensions.”

Moon earlier called for a ban on overseas North Korean workers, who are a key foreign currency source for the North, but Putin said the problem should be solved diplomatically, according to Seoul’s presidential office.

Abe, who will meet later in the day with Putin, said before his departure from Japan that “we must make North Korea understand there is no bright future for the country if it pursues the current path.”

Washington and Seoul began deploying THAAD before a conservative South Korean government was ousted in a corruption scandal. The liberal Moon took office in May calling for diplomacy with Pyongyang but the escalation in weapons tests has been the North’s only response.

Moon had temporarily halted the installment of THAAD to conduct more environmental reviews and ease residents’ concerns. But after North Korea conducted its second flight test of a developmental intercontinental ballistic missile in July, Moon ordered his military to work with U.S. commanders in South Korea to temporarily place more launchers before the reviews are conducted.

South Korean officials say THAAD will strengthen the country’s missile defenses, which now rely on Patriot-based systems, and will deter North Korea, which has missiles that can be fired from road-mobile launchers or submarines. They also say the health rumors are groundless and no such issues have been reported at other THAAD sites.