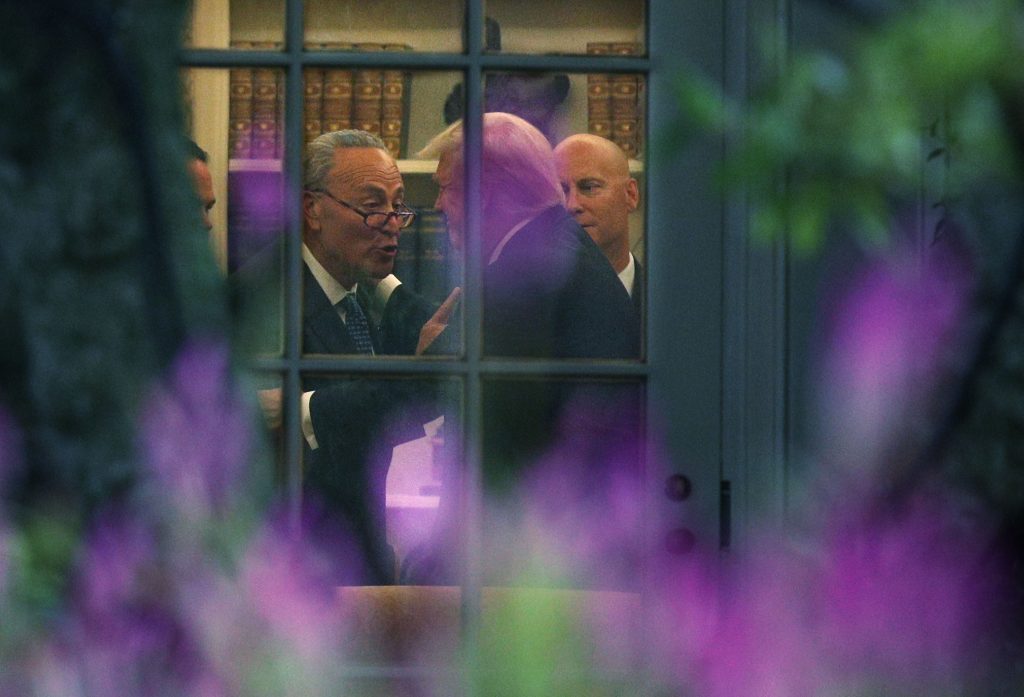 President Donald Trump and Senate Minority Leader Chuck Schumer have agreed to pursue a deal that would permanently remove the requirement that Congress repeatedly raise the debt ceiling, three people familiar with the decision said.

Trump and Schumer discussed the idea Wednesday during an Oval Office meeting. Schumer, Trump and House Minority Leader Nancy Pelosi (D.-Calif.) agreed to work together over the next several months to see if they can finalize a plan, which would need to be approved by Congress.

One of the people familiar described it as a “gentlemen’s agreement.”

Senate Democrats are hopeful they can finalize an arrangement with Trump by December.

“The President encouraged Congressional leaders to find a more permanent solution to the debt ceiling so the vote is not so frequently politicized,” White House press secretary Sarah Huckabee Sanders said.

The three people spoke on condition of anonymity because they were not authorized to discuss the contents of the meeting.

Another person familiar with the meeting said Vice President Mike Pence is open to changes he considers in line with the “Gephardt Rule” – a parliamentary rule making it easier to tie raising the debt ceiling with Congress passing a budget. The rule is named after former House majority leader Richard A. Gephardt (D-Mo.).

The deal comes after Mr. Trump sided with Democratic leaders Wednesday on a plan to temporarily raise the debt ceiling and fund hurricane relief, rejecting a Republican plan and vexing many in his party.

“I won’t get into a private conversation that we had [at the White House], but I think there’s a legitimate role for the power of the purse of the Article 1 powers, and that’s something we defend here in Congress.”

Article 1 of the Constitution sets up Congress’s powers, giving it the authority to write and pass legislation and appropriate government money.

The U.S. government spends more money than it brings in through taxes and fees, and it covers that gap by issuing debt to borrow money. The government can only borrow money up to a certain limit, known as the debt limit or the debt ceiling. The government routinely bumps up against this ceiling, requiring Congress to raise it again and again. These votes are often politicized and can cause panic among investors.

If the debt ceiling isn’t raised, investors have warned that the stock market could crash because the government could fall behind on its obligations if it isn’t allowed to borrow more money.

Treasury Secretary Steven Mnuchin has suggested scrapping the existing debt limit process and replacing it with a process that automatically lifts the borrowing limit every time Congress appropriates future spending.

The discussion between Trump and Schumer came during an Oval Office meeting that included other congressional leaders. At the meeting, they agreed to suspend the debt limit until Dec. 8. If Congress approves that suspension in the coming days, then they will have to revisit the matter again soon, potentially setting up another difficult vote for lawmakers.

The Treasury Department can use emergency powers to avoid defaulting on its debt, such as delaying certain payments. This means Mnuchin won’t run out of cash on Dec. 9, and probably will have several more months of flexibility before the issue will have to be revisited. But Senate Democrats are hoping to coalesce around a new process for authorizing spending that takes out these frequent debt-ceiling votes by December. They would have to receive support from congressional Republicans before any idea could be authorized.