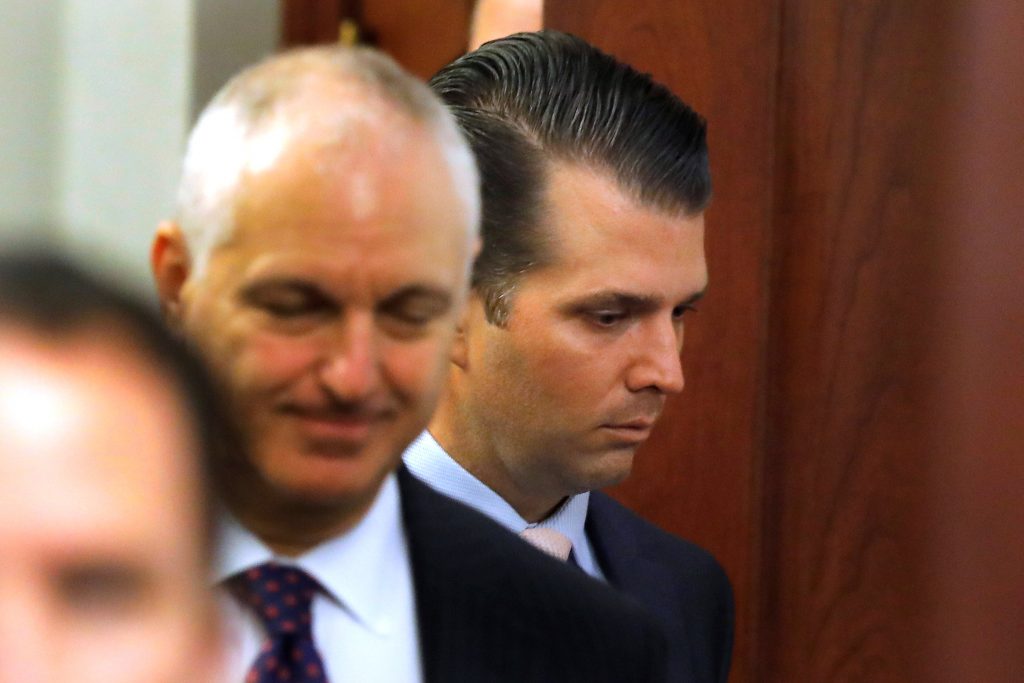 President Donald Trump’s eldest son told a Senate committee Thursday he was open to receiving information about Hillary Clinton’s “fitness, character or qualifications” in a meeting with a Russian lawyer last year.

However, Donald Trump Jr. insisted that neither he nor anyone else he knows colluded with any foreign government during the presidential campaign.

His description of a June 2016 meeting at Trump Tower, delivered in an opening statement at the outset of a closed-door Senate Judiciary Committee staff interview, provided his most detailed account of an encounter that has attracted the attention of congressional investigators and special counsel Robert Mueller.

It is also the first known instance of Trump Jr. giving his version of the meeting in a setting that could expose him to legal jeopardy. It’s a crime to lie to Congress.

Multiple congressional committees and Mueller’s team of prosecutors are investigating whether the Trump campaign coordinated with Russia to influence the outcome of the election. A grand jury used by Mueller as part of his investigation has already heard testimony about the meeting, which besides Trump Jr., included the president’s son-in-law, Jared Kushner, and his then-campaign chairman, Paul Manafort.

Trump Jr. spoke to the committee for about five hours, leaving midafternoon out of view of reporters.

In Thursday’s prepared remarks, which were obtained by The Associated Press, Trump Jr. sought to explain emails he released two months ago that showed him agreeing to the meeting, which had been described as part of a Russian government effort to help his father’s campaign.

In his new statement, he said he was skeptical of the outreach by music publicist Rob Goldstone, who said he had information that could be damaging to Clinton. But Trump Jr. said he thought he “should listen to what Rob and his colleagues had to say.”

“To the extent they had information concerning the fitness, character or qualifications of a presidential candidate, I believed that I should at least hear them out,” Trump Jr. said in the statement.

At one point during the email exchange, Trump Jr. had told Goldstone, “If it’s what you say I love it especially in the summer.”

Trump Jr. sought to explain that remark Thursday by saying it was “simply a colloquial way of saying that I appreciated Rob’s gesture.”

That mirrored his previous statements that sought to dismiss the meeting as a bust. He said the Russian lawyer, Natalia Veselnitskaya, gave vague information about possible foreign donations to the Democratic Party but then quickly changed the subject to a sanctions law, known as the Magnitsky Act, which the Russian government opposes.

The statement also provided additional detail in how Trump Jr. knew Goldstone, whom he said he met through the family of Aras Agalarov, the Trump Organization’s partner on a special event in Moscow.

Trump Jr. said he did not attend the Moscow special event, noting he hasn’t traveled to Russia since 2011. But he later met Goldstone when Aras Agalarov’s son, Emin, performed at a March 2014 golf tournament at Trump’s course in Doral, Florida.

Trump Jr. said that Goldstone would “intermittently” contact him including during the campaign when he would offer congratulations or support. But when he received the initial email that ultimately led to the Russian meeting, Trump Jr. said he hadn’t heard from Goldstone in “quite some time.”

In addition to detailing the timing of phone calls and emails leading up to the meeting, Trump Jr. also provided additional explanations of why he can’t be sure about certain parts of his recollection.

He said Goldstone didn’t give him a list of who would attend ahead of time, and Trump Tower security also has no record, Trump Jr. said, because Goldstone was able to bring the “entire group up” by only giving his name to a guard in the lobby.

“There is no attendance log to refer back to and I did not take notes,” Trump Jr. said.

Trump Jr. said he only remembers seven people in the meeting, though eight have been publicly reported.

The seven people Trump Jr. identified were himself, Goldstone, Manafort, Kushner, Veselnitskaya, a translator, and Irakli Kaveladze, who worked for the Agalarovs.

Trump Jr. does not mention Russian-American lobbyist Rinat Akhmetshin, who has told multiple news outlets, including the AP, that he attended the meeting at Veselnitskaya’s invitation. In recent weeks, Akhmetshin has testified about his recollection of the meeting before a Washington grand jury used by Mueller.

Trump Jr. agreed to the Senate interview after the committee chairman, Republican Chuck Grassley of Iowa, threatened to subpoena him. Grassley said in July that Trump Jr. and Manafort would eventually be questioned by senators in a public hearing, though he declined to say in recent days whether a public hearing will still happen.

Trump Jr. and the Judiciary Committee negotiated for him to appear privately and be interviewed only by committee staff. Senators were allowed to sit in but not ask questions.

Sen. Richard Blumenthal (D-Conn.) attended part of the interview, said it was “cordial.” He wouldn’t discuss details or say whether Trump Jr. was forthcoming, but said there are “a lot of areas that need to be pursued for more information.”

Blumenthal said that Mr. Trump mostly spoke for himself, instead of his lawyers speaking for him.

Trump Jr. also is expected to appear before the Senate intelligence committee at some point.

Sen. Mark Warner of Virginia, the top Democrat on the intelligence panel, said the senators want to speak with others who attended the June meeting before interviewing Trump Jr.

“We want to do this in a thorough way that gets the most information possible,” Warner said.

Manafort met privately with staff on that committee in July. Kushner has met with that staff, as well as members of the House Intelligence Committee.

That House committee has tried to talk to Trump Jr., too. Rep. Eric Swalwell (D-Calif.) said negotiations are underway and a date hasn’t been set.