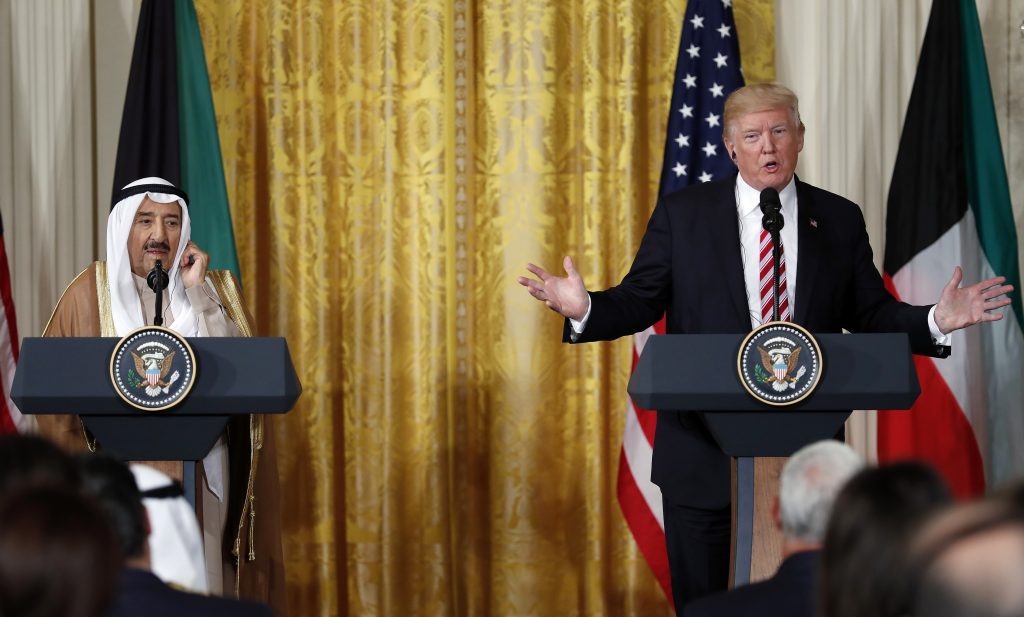 President Donald Trump on Thursday hailed efforts by the leader of Kuwait, a staunch American ally, to mediate a festering diplomatic crisis involving Qatar and its Arab neighbors that could have implications for the U.S. military presence in the region.

At a White House news conference with Sheikh Sabah Al Ahmad Al Sabah, Mr. Trump said he appreciated the emir’s thus-far unsuccessful bid to end the dispute between Qatar and Saudi Arabia, the United Arab Emirates, Bahrain and Egypt. He applauded Kuwait’s “critical contributions to regional stability” but also repeated an offer to mediate himself, particularly between Qatar and Saudi Arabia and the UAE. He suggested that a deal would be “worked out very quickly” if he became personally involved.

Mr. Trump said all the countries involved — members of the Gulf Cooperation Council — are “essential partners” with the United States in efforts to crack down on extremism, including the fight against Islamic State group. “We will be most successful with a united GCC,” he said. “We will send a strong message to both terrorist organizations and regional aggressors that they cannot win.”

His comments came after he sent conflicting signals about where he stands on the dispute. Mr. Trump initially appeared to side with Saudi Arabia, but then instructed Secretary of State Rex Tillerson to support the Kuwaiti mediation effort. Still, the dispute has dragged on for more than three months even after Tillerson shuttled between the parties in July and dispatched two other U.S. envoys to bolster the 88-year-old Kuwaiti emir’s initiative.

The crisis erupted on June 5 when Bahrain, Egypt, Saudi Arabia and the United Arab Emirates all cut ties to Doha over allegations Qatar funds extremists and has ties that are too warm with Iran. Qatar, which hosts a U.S. military base critical to the effort to defeat the Islamic State in Iraq and Syria, has long denied funding extremists.

In his comments, Mr. Trump offered a pointed reminder that terrorism financing is at the heart of the crisis. At one point he said that the dispute “began because of that fact that there has been massive funding of terrorism by certain countries.” He did not identify those countries but in June he had made reference to Saudi and other Arab complaints about Qatar.

For his part, the emir said he remained hopeful that a resolution to the crisis could be reached. He noted that Qatar had been presented with a list of 13 demands by the other countries and was willing to discuss them. Although Qatar has rejected some of them out of hand, al Sabah said he believed negotiations were possible.

“I am optimistic that the solution will come in the very near future,” he said. “The hope has not ended yet.”

In response to a reporter’s question, Mr. Trump briefly spoke about his administration’s efforts to restart long-stalled Israeli-Palestinian peace talks. He plans to meet both Palestinian President Mahmoud Abbas and Israeli Prime Minister Benjamin Netanyahu on the sidelines of the U.N. General Assembly later this month.

In Kuwait, media reports on Thursday focused on the emir’s visit to Washington as a sign of the strong relationship the two countries have, including when a U.S.-led coalition expelled occupying Iraqi forces from the small nation during the 1991 Gulf War. Today, Kuwait hosts some 13,500 American troops, many at Camp Arifjan south of Kuwait City, which also is home to the forward command of U.S. Army Central.