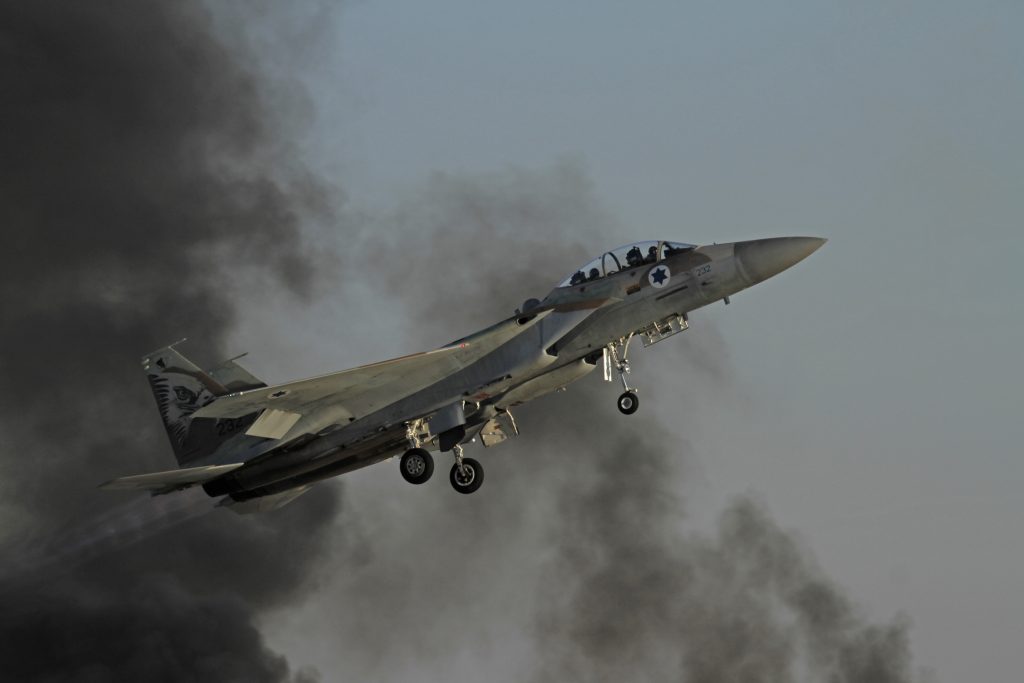 The Syrian army said Israel targeted a military site in Hama province early on Thursday, which a war monitor said could be linked to chemical weapons production.

The airstrike killed two soldiers and caused damage near the town of Masyaf, an army statement said. It warned of the “dangerous repercussions of this aggressive action to the security and stability of the region.”

The Syrian Observatory for Human Rights, which monitors the war, said the strike hit a Scientific Studies and Research Center facility, an agency which the United States describes as Syria’s chemical-weapons manufacturer.

The strike took place the morning after U.N. investigators said the Syrian government was responsible for a sarin poison gas attack in April.

The Observatory said strikes also hit a military camp next to the center that was used to store ground-to-ground rockets and where personnel of Iran and its ally, the Lebanese Hezbollah terror group, had been seen more than once.

Rami Abdurrahman, who heads the Observatory, said two facilities were hit, a scientific research center and a nearby military base where short-range surface-to-surface missiles are stored. He said the attack killed two people and wounded five.

“Many explosions were heard in the area after the air raid,” said Abdurrahman, whose group relies on a network of activists across the country. He said some of the blasts may have been secondary explosions from a missile storage facility being hit.

An IDF spokeswoman declined to discuss reports of a strike in Syria. Israeli officials have in the past admitted that Israel has repeatedly struck weapons shipments believed to be bound for the Iranian-backed Hezbollah, an ally of Syrian President Bashar al-Assad, without specifying which ones.

In an interview in Haaretz last month upon his retirement, former Israeli air force chief Amir Eshel said Israel had struck Syrian and Hezbollah arms convoys nearly 100 times in the past five years.

Israel sees a red line in the shipment to Hezbollah of anti-aircraft missiles, precision ground-ground missiles and non-conventional (chemical) weapons.

Hezbollah and Israel fought a brief war in 2006 and both have suggested that any new conflict between them could be on a larger scale than that one, which led to the deaths of more than 1,300 people.

Hezbollah has been one of Assad’s most important allies in the war, and last month its leader Sayyed Hassan Nasrallah said he had recently traveled to Damascus to meet the Syrian president.

Israel is conducting military exercises in the north of the country near the border with Lebanon.

“Weapons systems have been transferred from this organization [the Scientific Studies and Research Center] into the hands of Hezbollah during the years,” he said.

In May, an official in the military alliance backing Assad said that Hezbollah drew a distinction between Israel striking its positions in Syria and at home in Lebanon. “If Israel strikes Hezbollah in Lebanon, it will definitely respond,” the official said.

The Syrian army statement said that the Israeli strike, which it said took place at 2.42 a.m. (local time) from inside Lebanese airspace, had been made in support of Islamic State.

The Observatory reported a total of seven people killed and wounded in the strike.

Amos Yadlin, a former head of Israeli military intelligence, said the reported attack was not routine and targeted a Syrian military scientific center.

“The factory that was targeted in Masyaf produces the chemical weapons and barrel bombs that have killed thousands of Syrian civilians,” Yadlin said in an online post.

The strike sent a message that Israel would not let Syria produce strategic weapons, would enforce its own red lines, and would not be hampered by Russian air defense systems in Syria, he added.

The U.N. Commission of Inquiry on Syria said on Wednesday that a government jet dropped sarin on Khan Sheikhoun in Idlib province in April, killing more than 80 civilians, and that government forces were behind at least 27 chemical attacks.